John Bolton to the rescue! How his raving NYT op-ed helps the Obama administration

GOP's bluntest hawk explains that the alternative to a diplomatic deal is war with Iran. Thanks for admitting it! 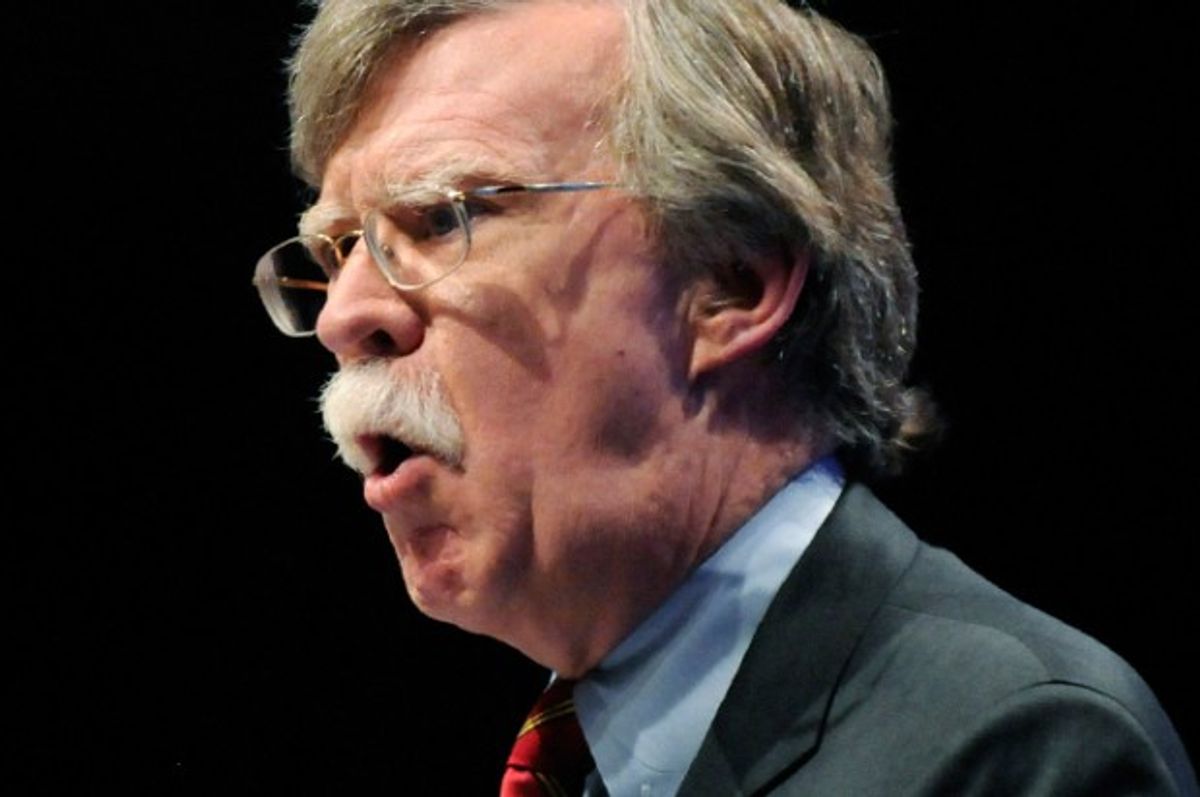 The New York Times editorial page pulled a fast one on Iran hawks today by publishing an op-ed from the most indiscreet member of their rank, former U.N. Ambassador John Bolton. While some Times readers may have been aghast to see the venerable paper publish Bolton's ravings -- under the headline "To Stop Iran's Bomb, Bomb Iran" -- the editorial decision should be cheered. Here we have a leading conservative hawk plainly admitting that the alternative to the deal currently under negotiation is not a "better deal," but is a bombing campaign followed by some hazily defined efforts at "regime change." Meaning, ultimately, war with Iran.

Bolton is one of those figures who's determined in his gut that Iran cannot be trusted to hold up its end of any diplomatic agreement, period. It's hard to argue with someone who's made up his mind that this is the case. Even if you sent a million international inspectors into Iran and they all determined that Iran was not moving towards weaponization, John Bolton would just say the Iranians are lying, because they're innate liars, and they're almost certainly hiding heavy-water reactors in various Dr. Evil-esque mountain lairs.

Since John Bolton is certain that Iran, regardless of what agreements are made and what enforcement measures are put in place to verify them, will always be working towards obtaining nuclear weapons, he is certain that Egypt, Saudi Arabia, and Turkey will also always be working towards building or purchasing nuclear weapons. Trying to achieve a diplomatic solution with Iran, to John Bolton, is the equivalent of setting off a regional nuclear arms race, and so it's a dangerous waste of time.

In the piece's most hand-wavey aside, Bolton tries to explain why Israel's possession of nuclear weapons hasn't set off a regional arms race. (Yes, in the same piece about how Iran is racing towards a bomb.) "Other states in the region understood — even if they couldn’t admit it publicly — that Israel’s nukes were intended as a deterrent, not as an offensive measure," he writes. He does not explain, in any form or fashion, how he knows that Iran wants nuclear weapons for "offensive" purposes instead of as a deterrent itself. It's a classic Orientalist flick-of-the-wrist that dominates so much of our conversation about Iran: Persians are an irrational people who aren't responsive to the logic of mutually assured destruction.

All of John Bolton's commentary on Iran climaxes with a unsettlingly casual call for regime change. As it did in Salon's recent interview with Bolton, so it does today (emphasis mine):

The inescapable conclusion is that Iran will not negotiate away its nuclear program. Nor will sanctions block its building a broad and deep weapons infrastructure. The inconvenient truth is that only military action like Israel’s 1981 attack on Saddam Hussein’s Osirak reactor in Iraq or its 2007 destruction of a Syrian reactor, designed and built by North Korea,can accomplish what is required. Time is terribly short, but a strike can still succeed.

Rendering inoperable the Natanz and Fordow uranium-enrichment installations and the Arak heavy-water production facility and reactor would be priorities. So, too, would be the little-noticed but critical uranium-conversion facility at Isfahan. An attack need not destroy all of Iran’s nuclear infrastructure, but by breaking key links in the nuclear-fuel cycle, it could set back its program by three to five years. The United States could do a thorough job of destruction, but Israel alone can do what’s necessary. Such action should be combined with vigorous American support for Iran’s opposition, aimed at regime change in Tehran.

This is the hawks' alternative to reaching an internationally negotiated accord with Iran that allows it to maintain some form of of a nuclear program with enforcement in place: mowing the lawn every few years until "Iran's opposition" finally achieves that regime change that's always just a hearty American shove away.

If the United States or Israel -- doesn't matter -- bombs Iran, how will that help "Iran's opposition"? Seems that that would rally the Iranian people around its regime and against the countries that are bombing it. It doesn't take a whole lot to unite Iranians against "American meddling," and American-backed bombing campaigns would almost certainly count as "American meddling."

Since folding on negotiations and bombing Iran would make it hard to maintain support for the international sanctions that have isolated Iran and brought it to the negotiating table, Iran could revive itself. The only way to achieve regime change, then, would be a U.S. war with Iran. That's because "Iran's opposition," in its most organized form, is not so much a broad fighting force as a group of a few thousand exiles who lobby the U.S. government to overthrow the Iranian regime and put them in power.

Say what you will about John Bolton, but the man has an ethos. He wants regime change in Iran at whatever expense, even if that's ultimately a war between the United States and Iran. Most people in America probably aren't down for that. We should appreciate the New York Times opinion editors for exposing the alternative to diplomacy by publishing this piece from the personification of hawkish bluntness.