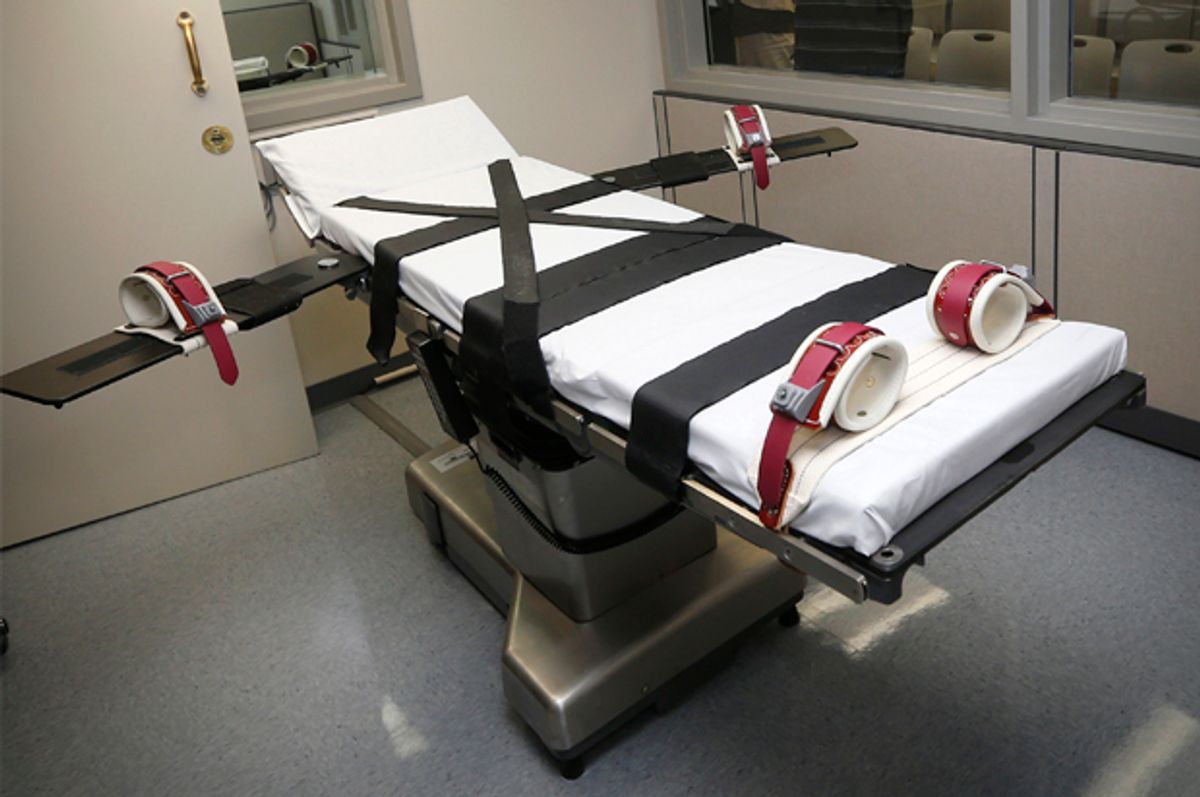 The recent release of Debra Milke, an Arizona woman who spent 23 years on death row for a crime she did not commit, is first and foremost a tragic story of injustice. But it's something else, too: another arresting example of how the reality of the criminal justice system in the U.S., which has come under increasing scrutiny in recent years, falls well short of its supposed intentions. As Supreme Court Justice Anthony Kennedy, who was appointed by law-and-order drug warrior Ronald Reagan, told Congress earlier this week, the system is, "[i]n many respects ... broken."

Politicians on both sides of the aisle are more willing to discuss making serious changes to American justice than they have been in more than a decade, but one of the most stark and disturbing manifestations of the system's flaws still often goes unmentioned. We're thinking, of course, about the death penalty. But if one considers the great attention paid by the media and the public to recent botched executions in Oklahoma and Arizona — as well as Utah's decision to bring back firing squads — there's reason to think that, too, may soon change.

Recently, Salon spoke over the phone with National Coalition to Abolish the Death Penalty executive director Diann Rust-Tierney about her group's work and the changing politics of capital punishment. Our conversation is below and has been edited for clarity and length.

If you had to describe the current politics of the death penalty in America, how would you say things have changed from, say, the '90s?

It seems like the debate has shifted away from arguing over values and now has more of a focus on metrics — i.e., instead of fighting about whether the death penalty is right or wrong, it's a fight over whether it works even on its own terms. But are there any dangers to having a conversation about making it work if you fundamentally would rather it not exist at all?

Our organization is not engaged in the business of making the death penalty work; we believe it's unworkable and we think 30-plus years of experimenting has shown that it can't work. There's the idea that we can have a fair system that sends people to death row and executes them in a way we can all feel comfortable with, but what we've seen over and over again is that that's just not possible.

That's not a system that any one of us can believe will produce a result we can stand by. Plus, we have nothing to show for all the effort and pain we've put into the death penalty. The states that have the death penalty and use it can't boast that they have lower homicide rates; in fact, some of them have higher rates. It's not keeping us safe and it is undermining our other values about racial justice and about making sure that justice isn't based on how much a person can pay. For us, this is not a conversation about getting it fixed, it's a conversation about exposing to the public the way in which this institution operates and showing them that it doesn't operate close to how they would hope or expect.

The issue of mass incarceration in general has become a major topic of debate, nationally. Do you think that broader conversation has something to do with the recent increase in attention paid to death penalty cases and issues?

I do think it's part of a broader reevaluation but I can't say that there's more movement on the death penalty because of the new focus on mass incarceration. It is evidence of an evolution, I think, in our thinking as a country and as a society. The focus on mass incarceration is at its heart about reevaluating how we see people and about reaffirming the value of human beings. Many of the conservatives that are very engaged in the effort to address mass incarceration come to that perspective from a faith-based view that the criminal justice system has to contemplate that rehabilitation is possible and redemption is possible, and that same understanding undergirds a conversation about the death penalty.

I think it's an incredibly positive thing that we're really looking at these difficult issues in a serious way and, more importantly, that communities that had not up to this point been engaged in really looking at the root causes of crime and violence are becoming engaged in looking at prevention measures. All of that is very positive when it comes to the death penalty, because the death penalty represents a failure to do those things. If we are really going to focus on the root causes of crime and on making sure we care for all victims of crime and give them what they need to heal, we're going to have to recognize that we have to recognize people's humanity and provide opportunity for redemption and rehabilitation. I see that going hand in hand with amending the death penalty.

Has there been a shift within religious communities over the past generation or so in terms of how they approach the death penalty?

I think so. I saw this happen with Michelle Alexander's book "The New Jim Crow." We saw churches reading that book as a book club and discussing it — not just reading the book but then taking action. I do think there has been a resurgence in the faith community going back, in some ways, to their roots of ministering to those in prison and helping families in communities. I do think there is a new energy coming from people of faith across the board. We're seeing it among Evangelicals, we're seeing it among Catholics; all across the board people are going back to the core values of faith, which has always been about caring for the least of us. Millennials, as we know, are looking for ways of making a difference and they see that as part of their mission. We're seeing young people getting engaged and seeing that it's their time to take up the mantle, so it's really very positive and I do think the faith community is a big part of it.

In terms of the increased media focus on pending executions — and problems with those executions — do you think that's a byproduct of technology making it easier for people to report on and read about these things? Or are botched executions happening more often? Or both?

I think it's a combination of both. The flaws we've been seeing and focusing in on — racial bias, people with mental illness facing the death penalty, the botched executions — have always been part of the problem, but I also think that the technology has really enabled advocates and others to get this in front of the public in real time. I'm thinking about the botched execution in Oklahoma, which came out on Twitter; that opportunity to give people an almost real-time experience of what was going on had an enormous impact. One of the biggest challenges we've had is that most people don't think a lot of the death penalty on a daily basis, and I think that's in large part what I consider to be passive acquiescence towards it, if not support.

When you put it right in front of people, they see that they can't square it with the things they really believe, with the abstract ideas that it can work cleanly and effectively. When you confront people with the reality, that's where you see the increase in opposition to the death penalty and, I think, a weakening in support for it overall. The problems have always been there, but the new opportunity for people to see in real time how the system breaks down on a daily basis is something that has been really helpful.

For people who aren't as plugged into the issue, what are some the next steps you're taking to address the larger, overarching goal of a nationwide conversation about ending the death penalty?

We've launched a campaign called the 90 Million Strong campaign, the goal of which is to really engage more and more people in the struggle to end the death penalty. There is an enormous public out there that knows that the death penalty is wrong and needs to get engaged, so what we've done is reached out and gotten 15 national organizations to collectively get the information out and encourage people to speak with their networks and their friends to get them engaged. We're encouraging people to be active in state efforts to end the death penalty, in state efforts to stop individual executions.

Our job really is to continue to mobilize what we believe is a significant number of people in the country who know that the death penalty is wrong and are going to say that now is the time to stop it. Through this next year we want to double the number of organizations engaged in this effort and further expand the number of people who are engaged. We want to see more states move towards ending the death penalty, and we want to provide the information necessary for them to do that. We believe that this is an idea whose time has come, and our job over the next year is to enlist more and more people in this effort from all across the political spectrum and from all walks of life to really make this a grassroots effort to end the death penalty.