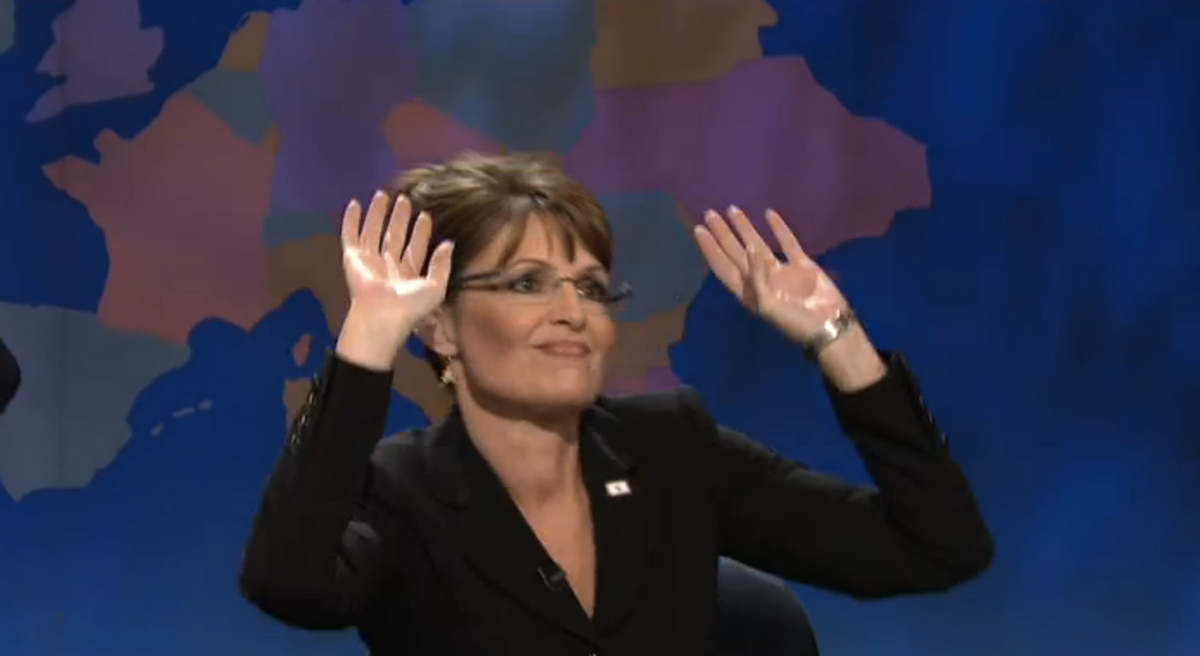 We had this conversation back in 1999 when America saw a rare flash of Al Gore's exceptionally dry wit behind that stiff exterior on "Letterman" -- and again, in May 2014 when President Obama appeared on "Between Two Ferns" and stunned us all with his ease in navigating the interview's sardonic tone.

Thursday morning — on the occasion of both a Mitt Romney "Tonight Show" appearance, and a Radio & Television Correspondents’ Association video, featuring a bunch of congressional leaders reading mean tweets — we were, again, reminded of the rarity of a great comedic performance from a public official. Each effort appeared highly calculated and thinly veiled to elicit a feeling of "Politicians -- they're just like us!"

If anything, this only highlighted the considerable differences.

That in mind, here's a look back at politicians who desperately tried to weasel their way into our comedy-loving hearts, but ultimately came up short.

Mitt Romney did "Mitt in the Mirror" on Fallon and tried to be topical.

Mitt Romney continued to troll the Internet after teasing a presidential bid for months, appearing on "The Tonight Show" this week to find that the man in the mirror was Jimmy Fallon (dressed as Mitt Romney). In the sketch, Romney tackled a potpourri of topical issues, such as Uber and Zayn leaving One Direction. This guy is current!

Amy Poehler did a "Sarah Palin rap" on "SNL" while Sarah Palin awkwardly nodded her head to the beat.

"I really feel like 'SNL,' in a big part, ruined Sarah Palin," Bill Simmons said in a candid Grantland interview with former "SNL" castmember Horatio Sanz earlier this month. Simmons wasn't wrong.  Tina Fey's wacky depiction of Sarah Palin became so interchangeable with the actual Palin that it likely made a real impact on the 2008 election. When the actual Palin appeared on "SNL"'s Weekend Update during the final weeks of that election, she appeared nervous and uncomfortable nodding her head along to Poehler's rap-roast of her. Which makes sense, given that Palin had planned to do the rap song herself but backed out last minute because she said she didn't feel comfortable with it.

Rudy Giuliani hosted "SNL" after getting a second term as mayor and was kind of braggy.

Rudy Giuliani had just been elected for a second term as New York's mayor and went on "SNL" to showcase both his work in office and his charm. Unfortunately, he failed on both accounts. "Tonight -- after tonight, what are they gonna do if I'm bad? Giuliani said in the cold open. "Blow up my car?" To prove that New York was now the safest it had ever been, he brought in Norm MacDonald for a tremendously unfunny bit about how he was bringing back hitchhiking.

And there's more! Rudy Giuliani dressed in drag for that same episode for some reason.

For some reason, Rudy Giuliani felt it necessary to appear in one sketch as a gray-haired Italian grandmother wearing lipstick and a dress. At the time of this appearance, AP speculated whether the appearance would hurt Giuliani in the Republican presidential nomination. "Some say conservatives won’t get the joke and will be turned off by what they see as yet another peek at Giuliani’s exotic, big-city liberal side," it said.

George W. Bush basically did stand-up comedy at Radio & TV Correspondents Dinner and made light of Dick Cheney shooting a guy in the face.

"A year ago, my approval rating was in the 30s. My nominee for the Supreme Court had just withdrawn and my Vice President had just shot someone," Bush joked before an audience at the Radio & TV Correspondents Dinner. "Those were the good ol' days!"

Pelosi shared a story about how her teenage daughter told her to "get a life!" and also proclaimed at one point:"I love Twitter!" When asked about an awkward clip of herself goofily singing with congressional officers, she responded: "Being from San Francisco, we're always linking arms and saying 'We Shall Overcome.'"

Janet Reno appeared alongside Will Ferrell on "SNL" and partook in a dance party. Kind of.

Janet Reno made a surprise cameo appearance on "SNL" to take part in Will Ferrell's recurring "Janet Reno Dance Party" sketch. "I like your dress, Janet," Reno says to Ferrell who is wearing the same blue dress as her. "Thanks, Janet. I like yours too," he responds. Together, the two launch into some awkward, half-assed dancing.

Chris Christie wore khakis and gyrated his hips in "The Evolution of Dad Dancing" with Jimmy Fallon.

For Father's Day, Chris Christie threw some high-wasted khakis on and joined Jimmy Fallon in some classic dad dancing. It's still really hard to believe the divisive New Jersey governor once gyrated his hips like crazy and slid Fallon through his legs on national television.

Sen. Rand Paul -- who had just released the book "The Tea Party Goes to Washington" -- joined Letterman in 2011 while wearing blue jeans. "I noticed you're wearing jeans," Letterman said. "Is that typical Kentucky senatorial garb?" Well, my wife told me it was kinda '80s and told me not to wear it but I didn't listen!" Paul responded.

Craig Ferguson asked Newt Gingrich, earnestly, what the difference between the House of Representatives and the Senate was. "The House is interesting and positive and nice and the Senate is those weird guys that we try not to deal with," Gingrich said. Later: Gingrich tells Ferguson that he's much better looking than him.