The economy is a Democrat: Why recent history shows the value of a progressive president

When Dems control the White House, the middle class wins. And under Republicans? Not so much... 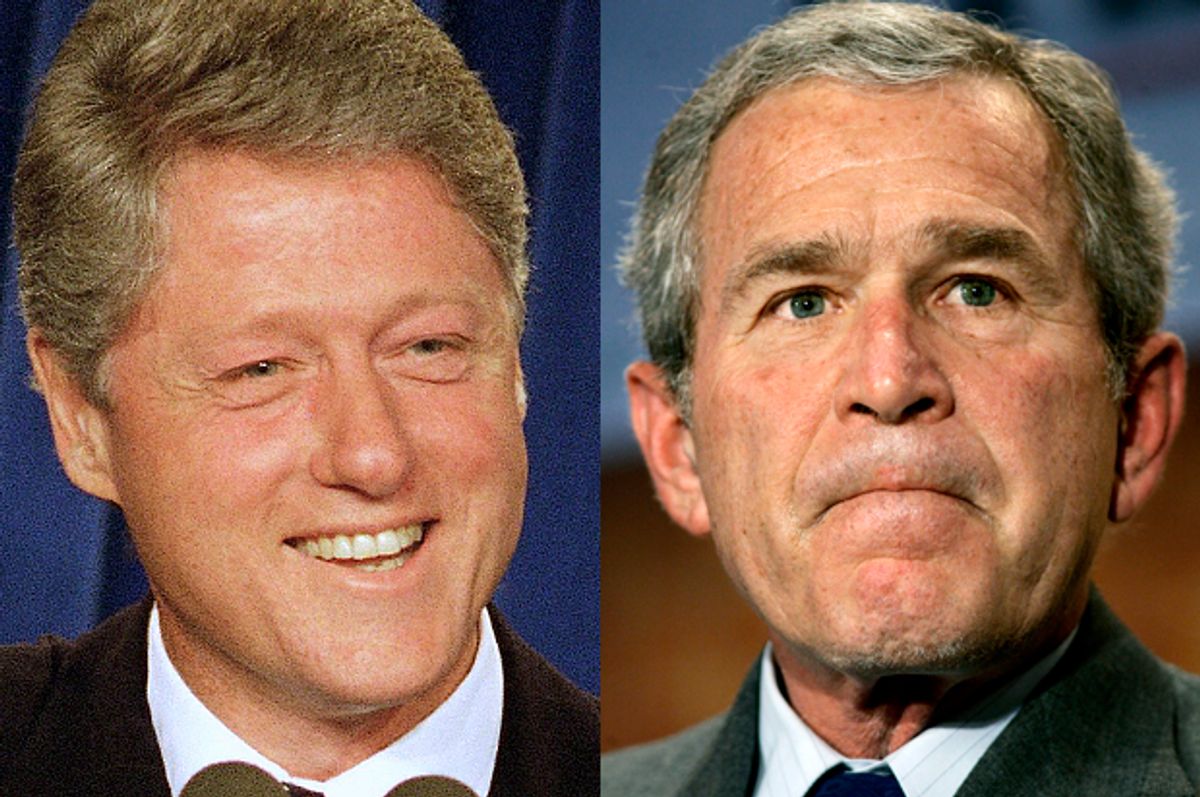 At the core of the debate between liberals and conservatives is a dispute over whose policies are better for economic growth, and particularly for the middle class. A new study by Bryan Dettrey and Harvey D. Palmer suggests one way to test this question -- by examining how economic growth differs under Republican and Democratic presidencies. Their finding might not be too surprising: Under Republicans, growth boosts the stock market, while under Democrats, it reduces unemployment.

The two academics examine how economic growth is distributed over time. Their data are expansive, covering the 60-year period from January 1951 to December 2010. They find that once economic growth increases above 1 percent a year -- and it does so over most of the period they studied -- “the average level of unemployment is significantly higher under Republican administrations.” As the above charts (from their paper) show, with either a one- or two-year lag, Democrats reduce unemployment dramatically during periods of GDP growth compared to Republicans. Some of this effect has to do with inflation rates (as a I note below), but the authors note another key difference: They argue that Republican policies (for instance, massive tax cuts for the rich and cuts to capital gains) incentivize corporations to use money to compensate CEOs or distribute to shareholders, rather than invest in workers and jobs.

Dettrey and Palmer are not the first academics to raise these points. In a 2004 paper, Larry Bartels showed that “Democratic presidents have produced slightly more income growth for poor families than for rich families.” He updated that analysis earlier this year and found the same result. One reason he cites is the minimum wage: Its real value increased 16 cents a year under Democrats, but decreased by 6 cents a year under Republicans. A seminal study by Douglas Hibbs found that “the unemployment rate was driven downward by Democratic and Labor administrations and upward by Republican and Conservative governments.” In another study, Alan Blinder and Mark Watson found that the economy grows faster under Democrats, but couldn’t determine why. It could be that the safety net boosts entrepreneurship by making Americans feel more economically secure (and willing to take risks).

There is also an increasingly large body of research on differing government policies at the state level. Christopher Witko and Nathan Kelly note that “since the Republican takeover of Congress in 1995, the states have played a more important role in shaping the income distribution,” and, consequently, in driving income inequality. In another paper, Elizabeth Rigby and Megan Hatch identify three major policies that states can pursue to slow the income growth of the 1 percent. In particular, they find that “policies played a significant role in shaping income inequality in the states.” If states had adopted more liberal policies, Rigby and Hatch suggest, the increase in inequality (as measured by the Gini Coefficient) would have been 60 percent smaller -- and the share going to the top 1 percent would have been halved.

(Story continues below the chart.) Overall, Hatch and Rigby find that conservative policies tend to exacerbate inequality, while liberal policies tend to reduce it. Rigby tells me that the “more redistribution” scenario can be considered the “liberal” scenario, and “less redistribution” the “conservative” scenario, although Democrats don’t always line up perfectly behind liberal policies. Kelly and Witko concur: “We observe that when unions are stronger and left party governments are in power at either the federal or state level we see lower levels of inequality.” Numerous other studies surveyed by Anne Case and Timothy Besley suggest that Democrats boost government spending, particularly on workers’ compensation and Medicaid (see pages 44 and 45).

Finally, it’s worth noting the racial impacts of these policies. I recently highlighted research by Zoltan Hajnal and Jeremy Horowitz showing that people fare far better under Democrats than Republicans. Given that black and Latino Americans are more likely to end up unemployed -- research suggests this is part of the reason for the racial wealth gap -- Republicans' preference for tightening monetary policy is most likely to fall on people of color. Conservatives may not be intending to harm black people, but their policies can end up having a disproportionate impact on them nonetheless.

Inequality did not arise in a vacuum. Government policy plays a significant role in determining the distribution of income. To take one policy, Anthony Atkinson and Andrew Leigh find that reductions in tax rates explain between one half and one third of the rising share of income going to the 1 percent in Australia, Canada, New Zealand, the U.K. and the U.S. (As I’ve noted elsewhere, there is strong evidence that unions and Democrats can reduce inequality, although unions are more effective.) Meanwhile, Olivier Bargain and others find that tax policy accounted for at least 29 percent of the increase in inequality between 1979 and 2007, and likely more. Further, they find, “Republican policymakers increased inequality especially at the top whereas Democrats increased the income share of the bottom 80 percent of the distribution.”

These findings decimate the idea that there isn’t “a dime’s worth of difference” between America's two major parties. Many commentators in particular focus too much on marquee policies and miss the “market conditioning” and other minor policies that Republicans and Democrats pursue in office, which can have an outsized impact on economic outcomes. (The fact that these same commentators often worry about “rising polarization” is telling.)

In fact, there are differences in the way Republicans and Democrats govern. Pretending there aren't doesn’t just sow confusion, it may hurt the left as well. A recent study finds that when people don’t perceive large differences between the parties, they are less likely to vote; and when people become alienated from the political process, they are less likely to vote. By contrast, as David Brockington argues, “choice-rich environments” increase the probability that people will turn out to vote.

It is clear that the parties offer distinct options to voters. While it is certainly true that liberal parties sometimes do less to fight inequality in the era of globalized finance, they still have an important influence over outcomes. The Republican party has indeed become the party of the rich.

Worryingly, however, Jan Leighley and Jonathan Nagler find that “respondents who perceive a greater difference between the candidates… are more likely to vote.” And “those in the top income quintile see a larger difference between the candidates on ideology than do those in the bottom quintile.” Research suggests that when voters gain more information, they shift to support more liberal policies and parties. In the current system, much of the problem rests in the fact that low-income and middle-income voters don’t realize that conservatives are fleecing them. The rich do realize they benefit from Republicans, and therefore have an incentive to turn out. Commentators who suggest that the two parties are the same, rather than galvanizing Democrats toward more progressive policies, may be simply keeping conservatives in power.