What would Paul Krugman do: Imagining the plan which defeats the ultra-rich

Obama had too much faith in the system to change it. Fighting income inequality requires this braver approach 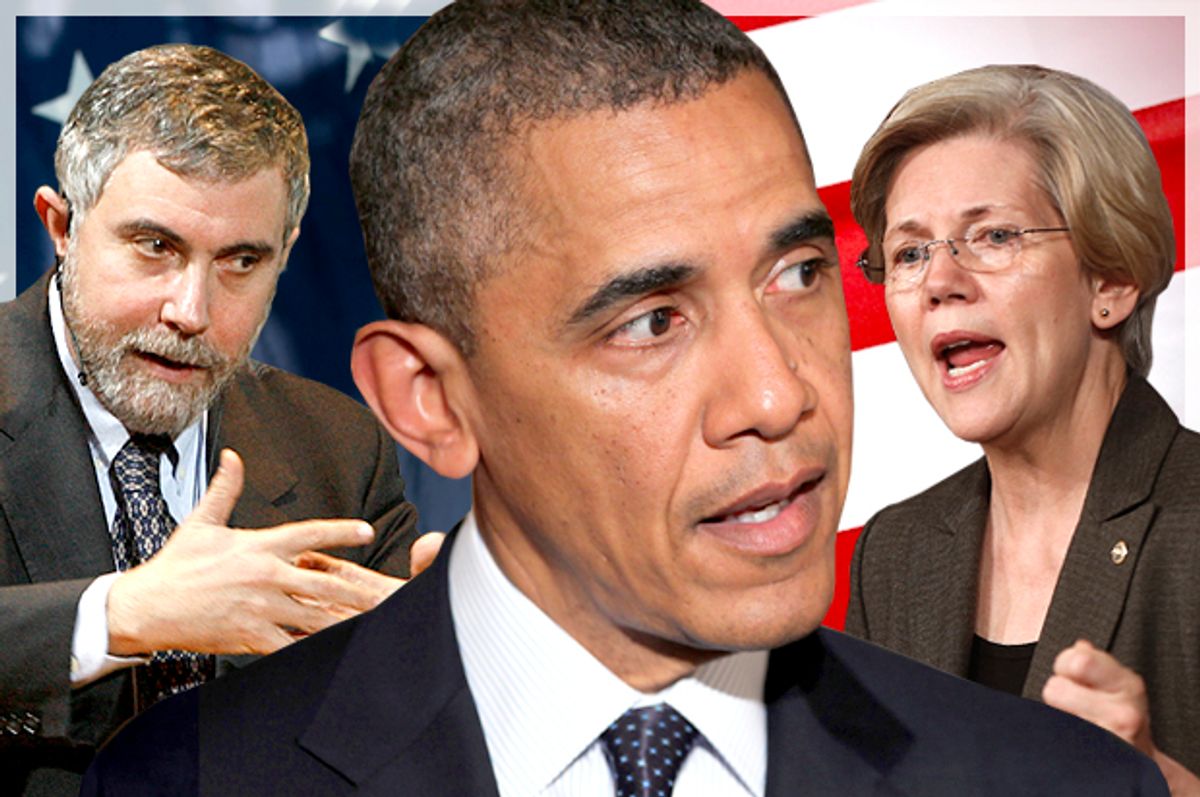 In September of 2011 Occupy Wall Street lit a match to a movement. Today that movement is known for what it did and didn’t do. Occupy connected income inequality to political corruption and put both issues at the center of our political debate. What it didn’t do, by design, was provide a blueprint for economic reform or build a more institutional movement to secure it.

There’s little our political system can’t co-opt and Occupy's choices made its issues easy targets for acquisition. Three and a half years later politicians still speak of income inequality, but not of corruption, and there’s still no blueprint for reform. In 2014 Democrats promised a more populist ‘message’ but then forgot to deliver it. President Obama has some new populist-hued ideas, but they won’t be enacted or even debated while he’s around to partake in the discussion.

Meanwhile the gap between the superrich and the rest of us grows wider. Big banks are even bigger and able again to fob their biggest losses off on us. History’s most extreme Republicans now control all of Congress, where they boldly seek to shred the social contract that gives life support to the poor and the middle class. And while it’s hard to believe politics could get more corrupt, it has, and by a lot.

America now chooses between two radically opposed paths. One leads to a final consolidation of wealth and power by the oligarchs of global capital; the other to a just distribution of prosperity and opportunity. One leads to the ultimate corruption of our democracy; the other to civic revitalization. One direction heads toward the absolute depletion of natural resources, ceaseless global conflicts and a likely environmental catastrophe; the other to economic and environmental sustainability and the possibility of peace.

What is extraordinary about this choice is its starkness, of course, but also that in a democratic society we are making it without benefit of an informed, full-throated debate. This is a debate Occupy was unwilling -- and perhaps unable -- to bring and that Democrats seem unable to grasp, at least not fully. The choice it frames is not as simple as that between Democrats and Republicans, or even progressives and reactionaries. It’s a choice between a status quo we know all too well and a future we’ve only begun to imagine; between an all devouring yet lifeless leviathan bent on a single goal and its opposite; a political economy that prizes pluralism and human scaled enterprise; that upholds a higher ethics and seeks our moral as well as material wellbeing.

Progressives must do what Occupy and the Democrats did not: conceive a new political agenda for a new political economy. I won’t pretend to describe it all but we can all see a few shards of the vase. Let me first say what it isn’t. I don’t mean the Republicans’ lethal nonsense but the more enlightened policies now on offer from Democrats, mainly President Obama.

In 2008 Obama often said “I’m a market kind of guy.” It’s an assurance all Democrats make -- but he really meant it. Obama's faith in the system led him to three huge errors. One was to apply free market metaphors to things they don’t fit, like health care, public education and environmental regulation. Another was to draw his top economic advisors from Wall Street. The third mistake was to take their advice.

Obama brought to the financial crisis a faith in Wall Street elites and experts in general. Like New York Times columnist Thomas Friedman, he sees technology and globalization as irresistible forces--Friedman calls globalization a golden straitjacket-- to which we can only adapt. He saw the crisis in the abstract, mathematical terms of macroeconomics. Macroeconomic tools are big and blunt; money supply, fiscal policy. An abstract thinker who likes the system isn’t apt to poke around looking for stuff to fix.

Obama thought the crisis arose not from any fundamental market flaw but from speculation and the ebb and flow of the business cycle. He saw but two remedies. One was to curb the excesses and contain the fallout, which is what Dodd/Frank did. The other was to use fiscal and monetary policy to pour mass amounts of free money into the system, which is what he and Fed chief Ben Bernanke did.

It worked as well as it could -- and way better than the austerity regimes Republicans are always hawking. It gave us what we now have, an economy that outperforms nearly all other developed nations and a middle class that underperforms  the one in Canada.  Some people are better off. Unemployment is down. CEO pay rose 37 percent while workers’ wages shrank by 0.6 percent. Never before have average wages fallen as the economy grew. The number of people living in poverty also rose, another first for an economic expansion.

We’ve fixed little even of what we acknowledged was broken in 2009. Banks we called too big to fail are bigger now; the 10 biggest now control over 50 percent of all our financial assets. JPMorgan Chase deposits have grown 29 percent. Small banks, on the other hand, are an endangered species. In 1995 we had over 12, 000 banks. Today there are fewer than 7,000, the fewest since the Great Depression.

In the great financial crisis debate, the right argued for austerity. The left, led by Nobel Prize winner Paul Krugman, argued for a bigger stimulus. Krugman was fighting the good fight, but over the course of it liberals became not reformers but mere Keynesians arguing over how to prime a broken pump. The economy is back on its feet but looks as if it will limp on forever, or until it finally falls over.

In 2013 Obama gave a speech about income inequality. Many think he called it the defining challenge of our time.  He actually called “making sure our economy works for every working American,” our defining challenge. That's different. He spoke strongly at first but as he got to the part about what to do, his speech turned to mush. In contrast, his last State of the Union speech called for enough new taxes to roll back years of widening income inequality. That he waited so long to give it robs it of some luster but credit the speech's impact, if not on policy then on politics.

Even at his best, as in the Affordable Care Act or that State of the Union, Obama is loyal to the status quo. Each addressed a big problem in a serious way but neither sought to disrupt old arrangements. Obamacare locks in a private for profit health insurance industry that is the most expensive, least effective administrative system the world has ever known. His budget lets the same old players play by the same old rules but redistributes some of their winnings to their victims. It’s the basic model of modern liberalism. It has done much good, but it is exhausted.

Outside mainstream politics and global finance capitalism, a new model is being built by people who know that ‘job creators’ have stopped creating jobs; that risk takers have been replaced by government-licensed toll collectors who secure their economic privilege by political corruption. The builders of the new economy know climate change is real and sense the vital organs of our democracy shutting down.

The new economy defends our rights as stewards of our commonwealth, from the electromagnetic spectrum to the minerals buried beneath our public lands. It also expands the commons by means ranging from open source software to community land trusts. It promotes a real ownership society by promoting employee stock ownership and every kind of cooperative. It seeks ways to adapt the labor union model to a new world; it seeks alternatives to pell-mell growth and the greed that drives it. It values and defends human scaled enterprises against the inevitable predations of the big and powerful. It prizes economic as well as social diversity. Above all, it cherishes democracy in all its economic and political forms.

The builders of the new economy regard themselves as just that; conscious builders of a new economy not mere adapters to impersonal forces beyond their control. They speak the language of micro, not macroeconomics, which means they are less prone to abstraction and more apt to talk about how things you can actually see could actually work. They see many ‘defining challenges’ for our generation. Among them: to protect our environment; revitalize our democracy and reimagine our economy.  Because they think holistically they see how things connect and know they can’t achieve any one of their goals without achieving all of the others.

In a future column I’ll write more about what is happening in the new economy and share some insights and achievements of those actively at work on it, including people around the world and many here in America. For now I’ll say only I think it’s a big part of the political, social and economic change we seek -- and that it’s  already bigger than you think and growing faster than anyone knows.