America's next top bigot: Why GOP's upcoming primary is an anti-gay freak show

When it comes to LGBT rights, the 2016 GOP roster may be more ridiculous than the clown car of 2012 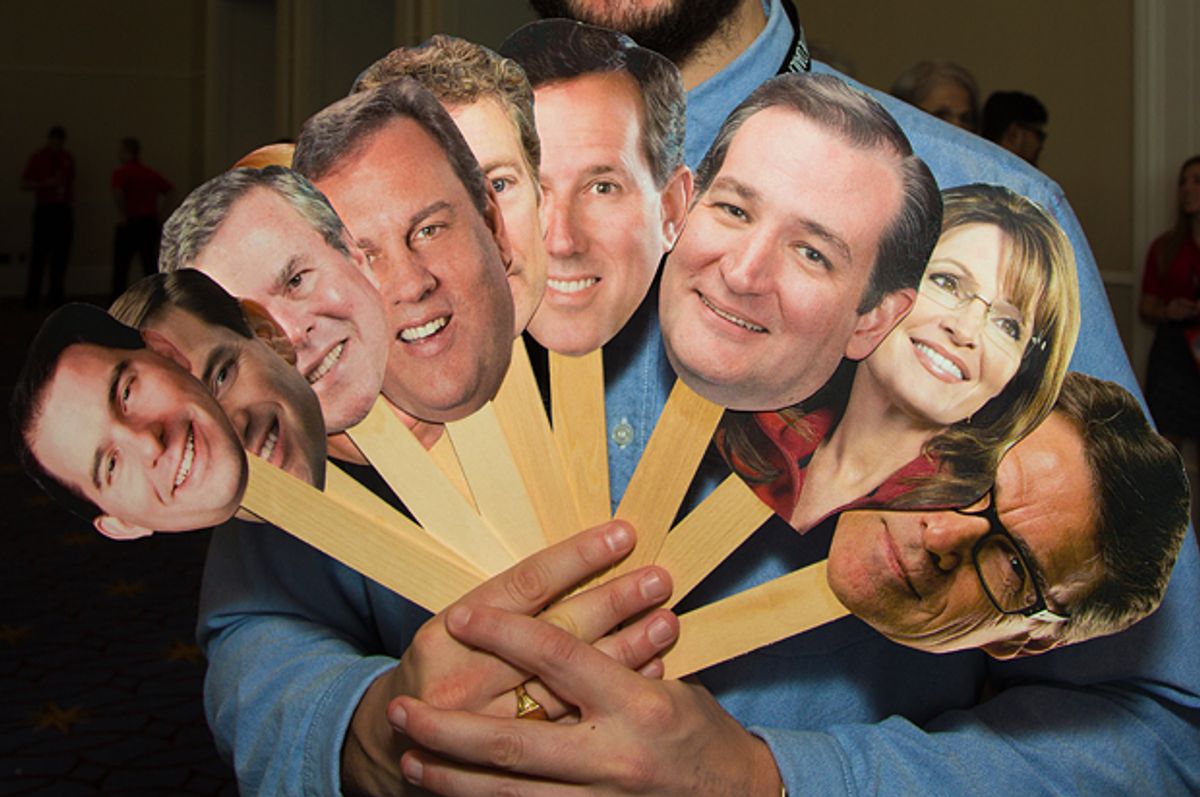 Thanks to Indiana Gov. Mike Pence, we’re getting an early look at a field of GOP presidential hopefuls that is supposed to include some moderates who plan on expanding the party’s appeal beyond its right-wing base.  And it’s pathetic. Before Pence’s odd press conference, where he promised to “fix” the bill but insisted there was nothing wrong with it, the top GOP contenders hustled to outdo one another in backing Pence and his divisive legislation.

Let’s remember that in 2014, Mitt Romney and Newt Gingrich were among the Republicans who urged Arizona Gov. Jan Brewer to veto AB 1062, Arizona’s version of Indiana’s “religious freedom” law – admittedly after they’d run for president in 2012. The 2016 candidates are showing no such courage – quite the opposite, in fact.

They are showing they all agree with Sen. Ted Cruz on one thing: the key to winning in 2016 isn’t outreach to so-called minorities, women and middle America, but to discouraged evangelical Christians (not to mention white voters) who sat out 2012.

Supposedly moderate and gay friendly Jeb Bush went all in defending Pence with radio host Hugh Hewitt Monday night. At first Bush took the route of condescension: the bill’s critics are too dumb to understand it.

“I think if [critics] actually got briefed on the law that they wouldn’t be blasting this law. I think Gov. Pence has done the right thing,” Bush told Hewitt, who agreed. “This is simply allowing people of faith space to be able to express their beliefs, to have, to be able to be people of conscience…I just think once the facts are established, people aren’t going to see this as discriminatory at all.”

Bush and Hewitt peddled the line that the Indiana law is the same as the federal Religious Freedom Restoration Act, signed by President Clinton in 1993, which is clearly not true. Amazingly, though, Bush himself explained exactly how the law is different. I’m not sure if that proves he’s stupid, or he thinks the voters are:

There are incidents of people who, for example, the florist in Washington State who had a business that, based on her conscience, she couldn't be participating in a gay wedding, organizing it, even though the person, one of the people, was a friend of hers, and she was taken to court and still in court. Or the photographer in New Mexico. There are many cases where people, acting on their conscience, have been castigated by the government. And this law simply says the government has to have a level of burden to be able to establish that there's been some kind of discrimination. We're going to need this. This is really an important value for our country to, in a diverse country, where you can respect and be tolerant of people's lifestyles but allow for people of faith to be able to exercise theirs.

In other words, this law lets the florist in Washington State and the photographer in New Mexico discriminate against gay clients. Thanks, Jeb, for spelling out why there’s been a national backlash against the bill. For his part, Pence insisted the bill would do no such thing, but it’s hard to know what the bill would have done or will do after Pence’s off the rails press conference.

Bush’s Florida rival, Sen. Marco Rubio, was equally straightforward about the bill’s intent. “Nobody is saying that it should be legal to deny someone service at a restaurant or at a hotel because of their sexual orientation. I think that’s a consensus view in America,” Rubio told Fox on Monday. “The flip side is, should a photographer be punished for refusing to do a wedding that their faith teaches them is not one that is valid in the eyes of God?”

Not surprisingly, Cruz, Louisiana Gov. Bobby Jindal and right-wing neurosurgeon Dr. Ben Carson quickly issued statements supporting Pence, and Wisconsin Gov. Scott Walker told CNN through a spokesperson that he supported the bill. Cruz said he was “proud to stand with Mike, and I urge Americans to do the same.” However, within 24 hours Mike no long stood with Mike.

Sen. Rand Paul has yet to weigh in on the Indiana bill, fixed or otherwise. But on Tuesday morning the nation learned that Paul doesn’t believe in the concept of gay rights, having told an interviewer in 2013, “I really don’t believe in rights based on your behavior.” The notion that “behavior” makes one gay seems rather backwards and bigoted, but the media will no doubt go on praising Paul for being an iconoclast who wants to expand his party’s reach, if not its concept of equal rights.

The Indiana bill served to out the leading GOP contenders when it comes to LGBT rights. Pence then pulled the rug out from under them by admitting the bill needed fixing. Good old McKay Coppins of Buzzfeed tried to square the circle this way on Twitter Monday night:

Coppins has been trying to depict Bush as the “gay-friendly” moderate for a while now, God bless him, even as Bush does what he can to prove otherwise. The soft bigotry of low expectations, when it comes to Republicans respecting civil rights, may ultimately vindicate Coppins. But no one should mistake that for genuine social progress.