Mike Pence has vowed to "fix" the RFRA -- whatever that means. The fetal homicide law could also use an overhaul 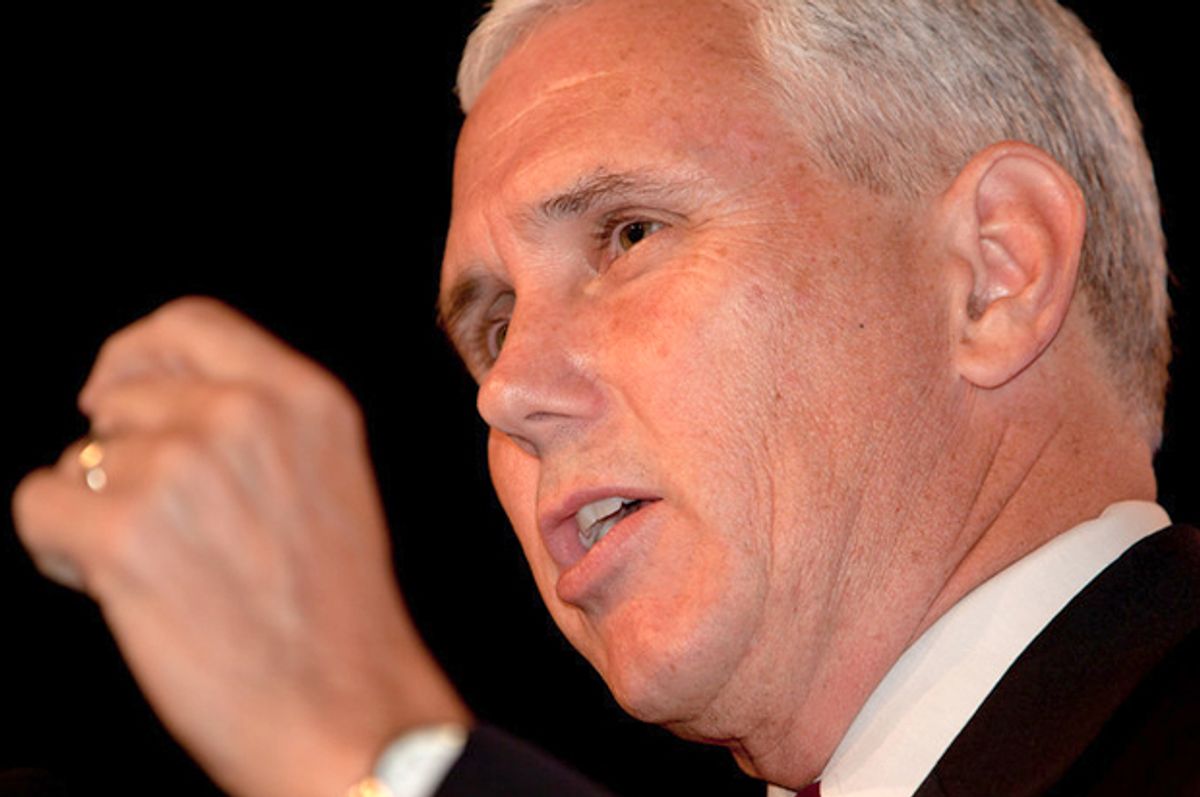 There are two big lessons coming out of Indiana this week, though they aren’t new and are hardly unique to the Hoosier State. First, a law can sound tame and still be a total nightmare. And next, be wary of any law introduced under the guise of protecting “religious freedom” or “fetal rights.” (You know, because of that thing Inigo Montoya said that one time.)

The Indianapolis Star ran a front page editorial on Tuesday calling on Republican Gov. Mike Pence to “fix this now,” a reference to the state’s recent passage of an expanded version of the Religious Freedom Restoration Act that critics contend would further enshrine anti-LGBTQ discrimination into law. (Yes, further enshrine into law. Discrimination against LGBTQ people is already legal in Indiana and elsewhere.)

The law, as written, could be used as a hall pass for discrimination as long as the person doing the discriminating says it’s based on a sincerely held religious belief. The fix, if this isn’t in fact the intent, is relatively straightforward, according to the Star:

Gov. Mike Pence and the General Assembly need to enact a state law to prohibit discrimination in employment, housing, education and public accommodations on the basis of a person's sexual orientation or gender identity.

Those protections and RFRA can co-exist. They do elsewhere.

Over at the Wall Street Journal, in an editorial published the same day as the Indy Star front page, Pence writes that he “abhors discrimination” and believes in “the golden rule.” (Funny because his record indicates otherwise.)

While Pence may very well consider this his personal credo, he certainly doesn’t view the golden rule as a matter for state law. Pence, and many of his Republicans colleagues, have given little indication that such a measure is on the table. (A confusing press conference Tuesday morning had Pence vowing to “fix” the law, but with few specifics.)

Like Pence, most Republicans in favor of the bill have sworn up and down that discrimination is not the intent of the bill. These assurances ring pretty hollow on their own, but there is ample precedent, in the state and elsewhere in the country, that the intent of a bill has very little to do with how the law is implemented. Which brings us to Indiana’s “fetal homicide” statute.

Like 38 other states, Indiana has a law that was nominally drafted to impose penalties on third parties who assault a woman and cause the loss of a pregnancy. But this week, that law was used to send a woman to prison over what she maintains was a miscarriage.

Purvi Patel is the first woman to be charged, convicted and sentenced under a feticide law. But many supporters of these laws argued that they were never intended to incarcerate pregnant women. And yet it happened. And will happen again, advocates say.

And just as the Indy Star pointed out a clear “fix” for Indiana’s RFRA disaster, the state’s fetal homicide law can be fixed, too. But to “fix” these laws would be to undermine their actual intent.

That’s why Republicans likely won’t budge on expanding protections to LGBTQ people under state law and likewise will be unmoved for calls to amend the language of the fetal homicide bill to ensure that women are not prosecuted. Or, better still, to change the fetal homicide statute to a law about the unwanted termination of a pregnancy. The law has the same effect -- to create a distinct penalty for injury that causes a woman to lose a pregnancy -- while not walking down the road to fetal personhood.

The right a gay couple has to eat in a restaurant without harassment is not incompatible with religious freedom. Neither is a woman's right to equal status under the law and the right to safe pregnancies free from violence. If Indiana lawmakers really abhor discrimination and the inhumane treatment of pregnant women, then it's time to prove it. It's Pence's move, but given his disastrous attempts to "clarify" the law, I wouldn't hold my breath.