It remains to be seen what Pence's changes will look like, but activists have already won a major victory 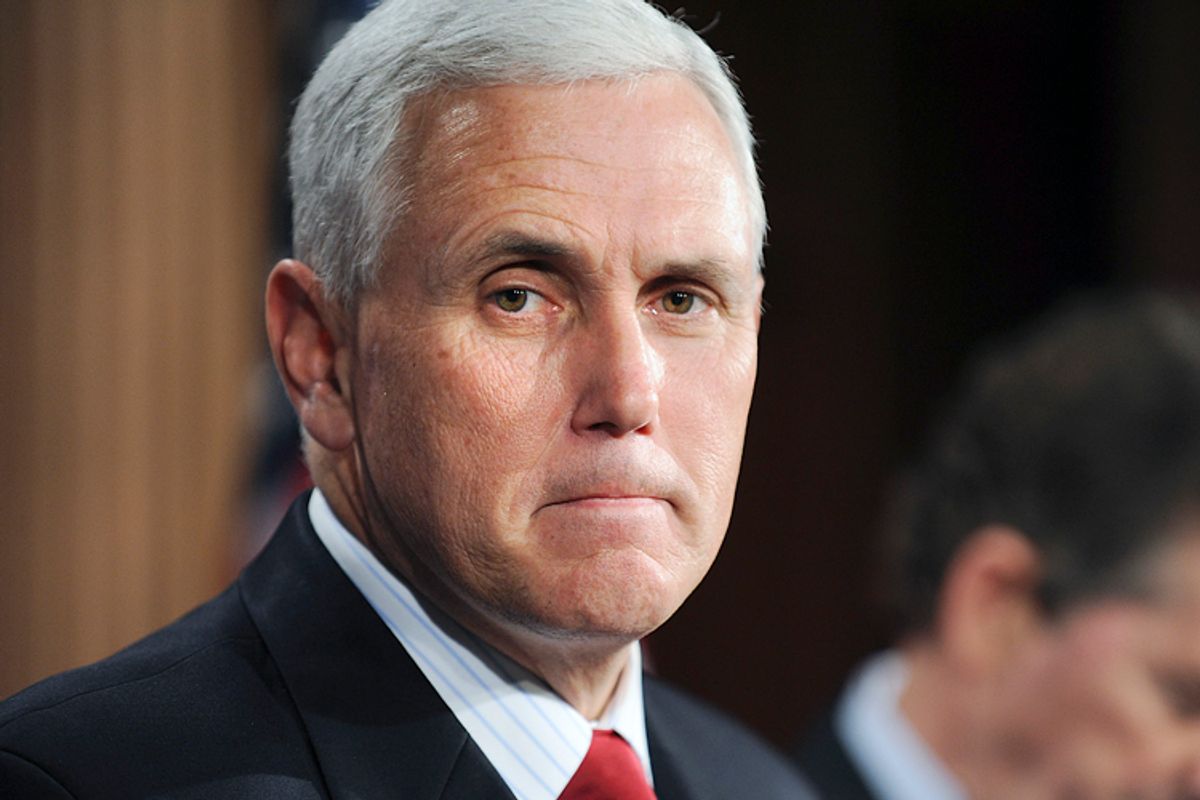 Appearing subdued and exuding an air of contrition, Republican Indiana Gov. Mike Pence's Tuesday press conference on Indiana's anti-gay "religious freedom" law was a stark contrast to his appearance on ABC's "This Week with George Stephanopoulos" on Sunday, when Pence defiantly defended the law, even as he repeatedly refused to say whether he thinks discrimination against gay people should be legal. Now, Pence is calling for a "fix" to the law, maintaining that it does not provide a license to discriminate and avowing that he personally "abhors" anti-gay discrimination.

“I don’t believe for a minute that it was the intension of the General Assembly to provide a right to discriminate,” Pence said. “But I can appreciate that that’s become the perception not just here in Indiana but across this country.”

How ever could that have happened? Well, the language of the Indiana Religious Freedom Restoration Act is quite clear: “A person whose exercise of religion has been substantially burdened, or is likely to be substantially burdened, by a violation of this chapter may assert the violation or impending violation as a claim or defense in a judicial or administrative proceeding, regardless of whether the state or any other governmental entity is a party to the proceeding," the statute reads. Sure, the law does not explicitly state that business owners are free to put up a "no gays allowed" sign, but it provides a compelling legal defense for businesses and individuals who deny services to LGBT people on religious grounds.

Amid a social conservative backlash against marriage equality and the increased visibility of LGBT people, conservative lawmakers have introduced similar measures throughout the country, often flat-out admitting that the purpose is to target the LGBT population. Pence has not been as forthcoming, but the purpose of the law was clear. Look no further than the people who stood behind Pence as he signed the legislation. They included American Family Association of Indiana head Micah Clark, a promoter of "ex-gay" therapy; conservative lobbyist Eric Miller, who calls the fight against LGBT equality "the greatest moral battle of this generation"; and Indiana Family Institute president Curt Smith, who once charged that gay people have no "life beyond absorption with narcissistic sex."

Smith helped draft the bill, by the way.

So it was clear from the start what this was all about. Why, then, is Pence calling for a clarification? Any sentient human being who's turned on a news program or scanned the headlines over the past week could readily answer: The law triggered a fierce backlash, far beyond what Pence foresaw.

While the outcry was actually quite predictable, its scale was not. Concerts and comedy shows were cancelled. A union conference was called off. Angie's List halted its corporate expansion in the Hoosier State. Calls mounted for a boycott of the upcoming NCAA tournament in Indianapolis. The governors of Connecticut and Washington banned state-funded travel to Indiana. Business-minded Republicans bucked their party's social conservatives, decrying the law's economic repercussions.

Without all of this, there's no way that Pence would seek to clarify the statute. Without the furor of LGBT people and their allies, there's no way that Pence -- a longstanding opponent of gay rights -- would have felt any need to tell the media that he loathes discrimination against LGBT people. (That's news to the couples whose marriages he would deny, to gay soldiers seeking to serve openly, and to workers who want federal protections against employment discrimination -- all of whom Pence has worked to keep second-class citizens.)

Indiana's lesson, then, is that protest still works. Granted, it's easier to effect change when you've got powerful business interests on your side; there's a reason public outcry didn't derail financial deregulation in last year's spending bill, for instance. But for those who doubted the relevance of activism and public pressure, Indiana is your answer.

Of course, it remains to be seen what the legislative "fix" will look like. Count me skeptical that it'll be much to write home about. Pence emphasized Tuesday that the law doesn't grant a "license to discriminate," which is true insofar as the explicit text of the legislation goes, but conveniently glides over the fact that all one needs to do under the law is demonstrate that serving a gay person "substantially burdens" one's religious beliefs. This is the crux of the entire law, so it would be nothing short of shocking to see that change. Moreover, Pence has stated repeatedly that he opposes a statewide non-discrimination law for LGBT people, meaning that Hoosiers targeted by bigoted business owners will have no legal recourse of their own. A genuine fix would correct that gross injustice.