How much Scientology is really in "The Master"?: Revisiting P.T. Anderson’s film in the wake of "Going Clear" 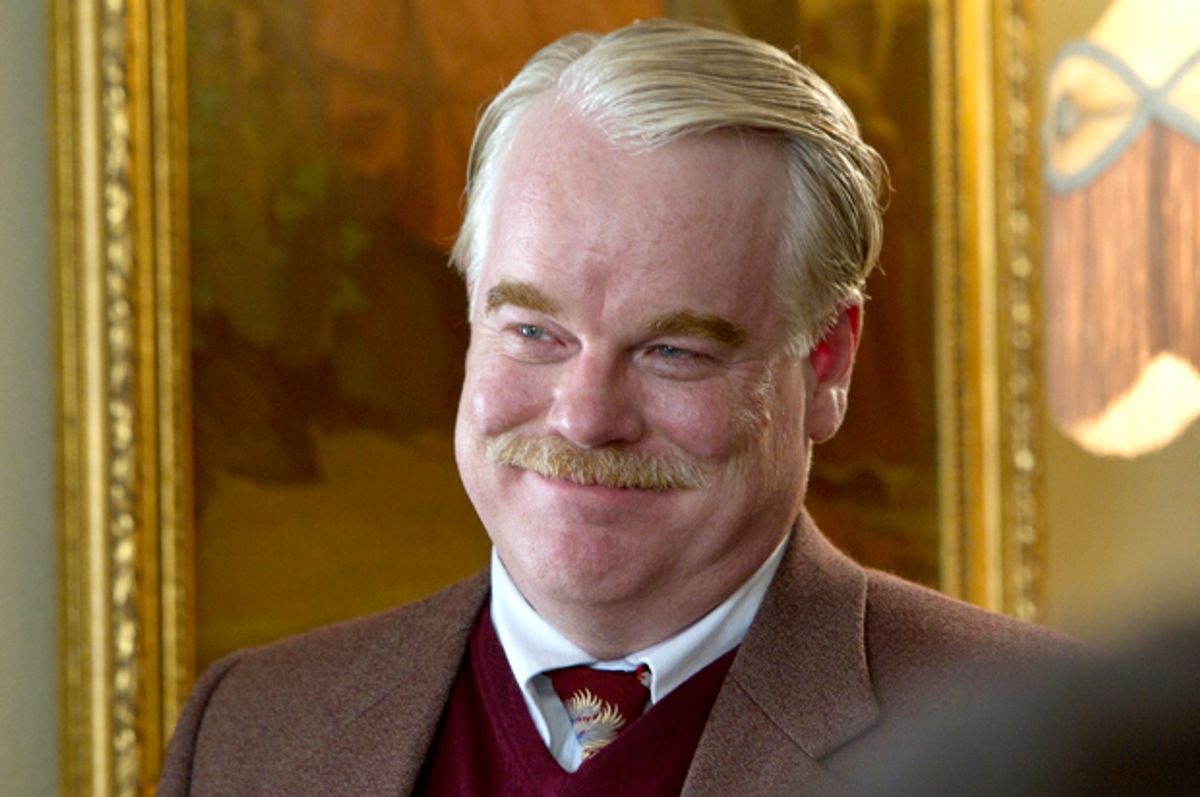 Philip Seymour Hoffman in "The Master" (The Weinstein Company)
--

When “The Master,” Paul Thomas Anderson’s cryptic opus about the relationship between enigmatic cult leader Lancaster Dodd (the late great Philip Seymour Hoffman) and his wayward disciple Freddie Quell (Joaquin Phoenix), came out, much hay was made about the film’s relationship to Scientology. Anderson eventually admitted that Dodd was based on L. Ron Hubbard and that the film "related to the early days of Dianetics” — however, the connections were never explicit, and much of the film veered toward impressionism and away from any specific real-world analog.

As you probably know if you're reading this, the popularity of “Going Clear” — both Lawrence Wright’s book and Alex Gibney’s documentary adaptation — has greatly increased the public’s knowledge and interest in Scientology. We took some time to cross-reference "The Master” with the revelations offered in "Going Clear" to examine where the similarities begin and end.

Boats!
The “Master” is replete with nautical imagery, from the opening shot of a ship’s wake to the fact that Freddie and his Master meet when Freddie stows away on Dodd's ship, the Alethia. As “Going Clear” readers know, Scientology has close connections with the ocean; the Church’s clergy, the Sea Organization, was initially established aboard three boats — the Diana, the Athena and the Apollo — and Hubbard spent many years at sea in Scientology’s early years. The Alethia seems to clearly reference the fleet's flagship, Apollo; both Lancaster Dodd and L. Ron Hubbard officiate their daughters’ weddings aboard these ships.

The doctrine of Dodd's group, "The Cause"
This seems to be where the parallels between Scientology and “The Master” are most strong. We never hear the Cause’s full doctrine articulated, but we know that it, like Scientology, espouses the belief that human beings are made up of some sort of spirit separate from our bodies; as Dodd puts it: “Our spirits live on through the whole of time, live in many vessels through time, this is the vessel you’re living in now.” This is similar to Scientologists’ belief that human beings are made up of immortal spirits called thetans, and that thetans inhabit many different bodies over time (similar to a process of reincarnation).

Just as Scientology has the larger goal to change the world for the better, Dodd believes that work on each individual mind has the larger goal of “righting civilization and eliminating war and poverty and therefore the atomic threat.” Similarly, like Scientology, the doctrine of the Cause dates back trillions of years — as Dodd says to Freddie, “we are in a battle that’s a trillion years in the making and it’s bigger than the both of us” —  and makes its adherents sign a multibillion-year contract.

“Processing”
The Cause’s “processing” also bears similarities to the auditing process Scientologists undergo in order to ascend up the Bridge to Total Freedom, which is based in repetition, in mastering one’s emotions, and in getting the participants to relive traumatic experiences so they can overcome them (like when Freddie is forced to repeatedly hear the name of his ex, Doris). As Dodd says, "You are not ruled by your emotions…it is not only possible, it is achievable, that we do away with all negative emotional impulses and bring back man to his inherent state of perfect.”

The notion of returning to an inherent state of perfect seems to evoke the Scientology concept of going “Clear” — essentially, the goal of eradicating the reactive mind, which is where fears, phobias and irrational urges live. In the film, Dodd suggests processing can cure leukemia; Scientologists also believe that auditing can cure physical maladies. There is also the notion that processing, like auditing, can provide its adherents with superhuman abilities, like when Freddy is instructed to change the color of Peggy's eyes with his mind.

The Cause’s processing, like auditing, also involves the ability to go back in time through one’s memories, as well as to travel even further back and experience past lives. As Laura Dern's character, Helen Sullivan, says in the film, "There's a different feel to another period and time that's so basic it's hard to describe,” and that subjects must “allow that there may be color with unfamiliar tones, perhaps because the gaslight shining on it. There may be a strange quality to the air, its particles of dust derive from unmodern constituents. Even human bodies radiate a different kind of warmth when covered with the fabrics of another age."

According to Wright in "Going Clear," this echoes almost word for word a speech given by Hubbard's executive Helen O’Brien, who speaks of experiencing past lives:

“There is a different feel to another period in time that’s so basic it’s hard to describe… If you find yourself in a room, there may be color with unfamiliar tones because of gaslight shining on it. The air has a strange quality. Its particles of dust derive from unmodern constituents. Even human bodies seem to radiate a different kind of warmth when they are covered with the fabrics of another age.”

The book
Much of the film centers on Dodd’s publication of book two, “The Split Saber,” which has been hidden in the desert and which Dodd and Freddie go dig up. The textual foundation of Scientology — “Dianetics: The Modern Science of Mental Health” — is referred to within the Church as book one; a number of people have pointed out that book two could be an homage to Hubbard’s mysterious, never-released book “The Dark Sword, Excalibur,” which Hubbard thought at the time would change the world (in “The Master,” Dodd refers to the book as “my unpublished work -- my life’s work”).

A Slate post from 2013 also points out that a deleted scene from the film had Dodd's son explaining that the book was hidden because it was so powerful that some readers killed themselves after reading it. As Wright says, "Hubbard explained to his agent that he ultimately decided to withdraw the book from publication because the first six people who read it were so shattered by the revelations that they had lost their minds. The last time he showed "Excalibur" to a publisher, he said, the reader... jumped out the window of the skyscraper."

L. Ron Hubbard and Lancaster Dodd
After seeing the archival footage in Gibney’s “Going Clear,” it’s difficult not to be struck by the physical resemblance between L. Ron Hubbard and Hoffman’s Lancaster Dodd. They look remarkably alike, with the same ruddy complexion, booming voice and contagious charm and charisma -- which could devolve into rage-fueled outbursts at the slightest provocation. Like Hubbard, who was a jack of many trades, Dodd describes himself as a "writer, doctor, nuclear physicist, theoretical philosopher."

A strategy of aggression
As Dodd's wife, Peggy, says after the group comes under early fire, "The only way to defend ourselves is attack.” This is similar — almost word for word — to Hubbard’s writings, which proclaim: "Don’t ever defend. Always attack” (a practice that the Church's opponents and defectors know only too well).

Harsh treatment for outsiders
In the penultimate scene of the film, Dodd tells Freddie that if he leaves, he never wants to see him again; as Peggy puts it, “this is something you do for a billion years or not at all." At this point, it is difficult not to think of Scientology’s habit of excommunicating people and labeling them “suppressive” if they don't conform to the Church's will. (Also, when Freddie asks where Dodd's daughter Elizabeth is, Peggy says "DCF." This is never explained, but it sounds an awful lot like RPF, Scientology's "Rehabilitation Project Force," where insubordinate Sea Org members go to be rehabilitated.)

Hubbard’s family
In the film, Dodd has a son, Val, who at one point accuses his father of “making this all up as he goes along.” Hubbard, too, had a son, Quentin, who rejected his father's teachings and died of an apparent suicide at the age of 22. Meanwhile, Dodd’s loyal wife, Peggy (played by Adams), bears a lot of similarities to Hubbard’s ruthless third wife, Mary Sue — which was apparently Adams' character's name in the original screenplay.

The Motorcycle Race
In “Going Clear,” Wright explains that Hubbard loved motorcycles; a pivotal scene in the film involves Freddie and Hubbard speeding on a motorcycle in the desert (this also is the moment when Freddie flees the group — or “blows," as it's known in Scientology). Hubbard also famously crashed his motorcycle in 1974; as Wright writes, “some members of the Sea Org cite the motorcycle accident as the moment when Scientology changed course and sailed toward a darker horizon.”

Geography
Both Dodd and Hubbard spend time living in New York. The film concludes with Dodd relocating to England; Hubbard purchased Sussex's Saint Hill Manor in 1959, where he sets up a famous Scientology training center.

Freddie Quell
Quell doesn’t have a clear real-world analog; however, in one reading of the film, Quell is just another side of Hubbard. Like Hubbard, he serves in the Navy in the South Pacific in WW2 and supposedly suffers a series of physical and mental health ailments following his service. One also sees comparisons between Quell and current head of the Church David Miscavige, from the notorious bad temper to the fact that Miscavige worked as a cinematographer and photographer within the Church early on (Quell too acts as a photographer throughout the film).