Hateful politics and the Final Four collide in Indiana: "They were told they’re here to play basketball"

As the nation debated Indiana's "religious freedom" bill, the conversation among players and media was more muted 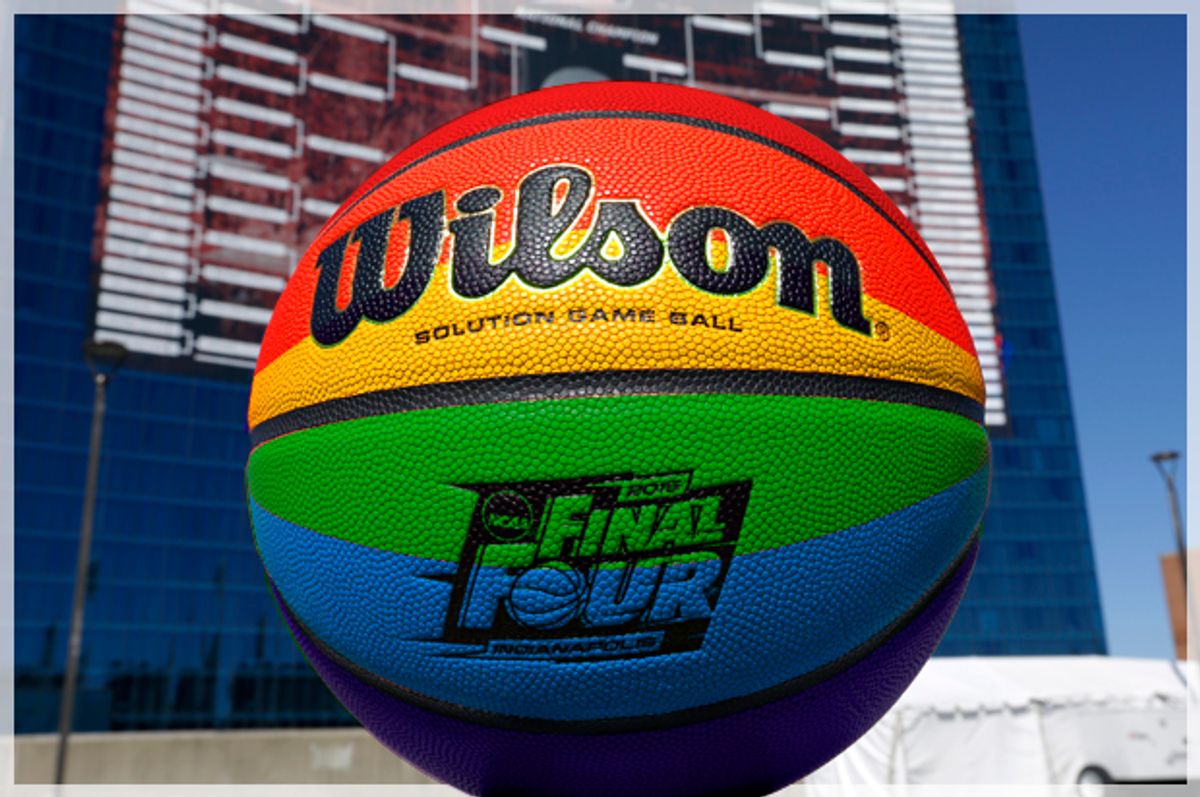 Poor Indianapolis, all gussied up for one of the country’s best sporting events, but unable to feel the civic pride.  “The Road Ends Here” read the front of Lucas Oil Stadium, but it certainly wasn’t the road to tolerance for everyone.  The façade of the JW Marriott hotel, turned into the world’s biggest tournament bracket that lit up the night, may have been visible from outer space, like some cosmic irony.

Understandably, there was a little embarrassment heading into the weekend, even defensiveness.

“We’re not the bigoted backwater idiots that the bill makes us look like,” Indianapolis Star sports writer Gregg Doyel, a columnist with a national reputation, told me.

NCAA president Mark Emmert, the leader of the reform-starved governing body of college athletics—headquartered in Indianapolis and about to kick off its marquee $1 billion dollar grossing event—was forced to address the issue at his annual pre-Final Four press conference on Thursday. Most of the reporters in attendance were of the sporting variety, though “real” news reporters, as sports writers self-deprecatingly call them, had shown up, too.

“Are we happy that the debate is taking place during Final Four week?  Of course not,” Emmert said, speaking from the stadium’s cement understory.  “But we hope they can resolve it quickly, not just because of this event, but because it’s an important issue.”

Remarkably, the press conference focused almost exclusively on the religious freedom bill.  Would the NCAA not use Indianapolis as a tournament site in future years?  Would it move its headquarters?  How did civil rights issues coincide with the mission of the NCAA?  Nearly forty-five minutes of Emmert wading into uncharted waters, and he was doing pretty well until this attempt at humor when commenting that a large number of young people were employed by the NCAA, some of them possibly gay: “These issues for young people are very, very different than they are for old codgers like me.”

(On Wednesday, the four Final Four coaches, old codgers themselves, issued a vanilla joint statement through the NCAA, a clear attempt to sweep the issue aside and move on to America’s greatest form of sporting escapism.)

The state legislature issued revisions to the law the same day as Emmert’s presser, and Kyle Palazzolo, a staff attorney with Lambda Legal, thought that yes, college basketball had had a direct impact on the revision process. “The timing of the Final Four definitely accelerated the timeline," he said. "People looked to the NCAA for a response, and because of that the NCAA brought in other business and community leaders who really put pressure on the legislature and the governor.”

It is difficult to recall another domestic sporting event in recent years that has so directly impacted public policy, let alone so quickly.  And by Friday, amazingly or maybe not so amazingly, the issue wasn’t even a faint din within Lucas Oil Field, save for a Salon writer asking college basketball players how they felt about the revised legislation.  Had there been any team discussion?  Any conversation with gay friends back on campus?

Wisconsin senior Frank Kaminsky: “All the team discussed is that we’re inclusive.”

Kentucky’s Willie Cauley-Stein, a junior: “We only vaguely talked about it.  A lot of our focus has been on our game against Wisconsin.”

Duke freshman Jahlil Okafor: “We discussed it as a team before we came here.  We just support what the NCAA is saying and what our university is saying.  We don’t believe in any discrimination.”

Who says they needed to take a firmer stand?

“Personally, I think it’s inappropriate to even ask them about it,” Doyel told me.   “These kids are here for a once-in-a-life time opportunity, and they’re basketball players.  They’re not equipped to talk about (the religious freedom act).  Hell, I’m not equipped, and I’m a grown-man communicator.”

University of Kentucky’s sports information director Eric Lindsey was eager to agree.  “They’re a group of kids who don’t know enough about it,” he told me. “They weren’t told they couldn’t talk about it, but they were told they’re here to play basketball.”

On Friday evening there was a social gathering of the gay sports media coterie at the downtown location of Scotty’s Brewhouse, a statewide chain with ten locations.  Owner Scott Wise, a devout born-again Christian, had released an impassioned statement urging tolerance for all people regardless of sexual orientation.  Cyd Zeigler, co-founder and lead writer of Outsports.com, “The Galactic Leader in Gay Sports,” had posted an announcement urging the cohort to spend their dollars at Scotty’s.

There was Zeigler, a debonair 41-year-old, in a bright pink sports coat among a thronging crowd of Final Four fans dining on chicken fingers and burgers.  The primary advisor to NFL prospect Michael Sam when he came out in February 2014, a carefully orchestrated media event, Zeigler had been going to local businesses dressed “very gay,” and asking if it was okay that he liked men, to see if he’d get denied service.  So far, no service denied.  One waitress, at Rock Bottom Brewery, told him, “I'm ashamed of my state.”

The group was excited about the impending arrival of Derrick Gordon, the University of Massachusetts basketball player who came out with Zeigler’s help in April 2014, the first men’s NCAA player to come out and play in a game.  Gordon was to be featured on an Outsports panel discussion the next morning, along with retired NBA player Jason Collins.

One gay media member joked that Zeigler should be excommunicated from the tribe for holding a panel at 8:30 a.m. on a Saturday morning.  But that morning a huge crowd had gathered in the carpeted hallway of the Indiana Convention Center.  Had so many people shown up despite the challenging hour to discuss issues of sexual orientation in sport thanks to the religious freedom act?

No such progress.  “The Legends of the Hardwood Breakfast” was being held right next-door, featuring members of Indiana’s undefeated 1976 team, and sponsored by the Christian organization Athletes in Action, which uses sports as a platform to help lead people to Jesus.

“Well, none of us are legends,” Wade Davis told me, a former gay football player who played professionally in Europe and was invited to several NFL pre-season camps in the U.S., before retiring due to injury.  He is executive director of You Can Play, an advocacy-education initiative for gay and straight athletes, which enjoys a good working relationship with Zeigler and Outsports.

I counted fifteen people in the vast conference room when the panel began. Zeigler moderated and Gordon gave a moving account of having been ostracized from the UMass basketball team—teammates refused to shower in his presence.  In the span of a few months, though, most of the players got more comfortable showering in his presence.  Gordon graduates this spring and plans to play his final year of college ball at a different school; NCAA rules let student-athletes with a year of eligibility left transfer and play at another college as a graduate student without sitting out a year, the rule for undergrad transfers.   A good player but not great, it will be fascinating to see where he winds up.

Collins spoke about his time in the pros, mentioning that he kept a running tally of the homophobic comments he heard before he came out.  He would only say, “It wasn’t a good number.”   Advice was dispensed for how coaches could better deal with a whole host of locker room issues, thanks in large part to Zeigler’s polished moderating skills.  A shame so few people were there to listen.

Collins and Gordon rushed across downtown to feature in a 10 a.m. press conference with the state’s first openly gay elected official, Indianapolis City County Councilor Zach Adamson, who sponsored the city’s Anti-RFA Resolution.  The event was organized by a different gay athlete advocacy-education group, Athlete Ally, and it took place on the patio of a food court before a tiny group of reporters and curious passerby.  It was very difficult to hear the speakers because the sound system was malfunctioning, the wind blowing, birds squawking.

“I love Indiana,” I’m fairly certain Adamson said.  “I love Indianapolis.  The people of Indiana have really made me proud over the past few weeks.  We’ve shown the world how entirely disconnected the Republican majority is with the people and most certainly with the economic welfare of our great state.  They should be ashamed.

“To whatever degree we can call this a fix,” he said of the revised language, “it is, on the best of days, only a half measure.  It is time to add LGBT Hoosiers to the protected class list, and we should do this, if for no other reason, than to free up time (spent on bigoted law making) for our state legislature.”

Like the panel discussion, it was a shame more people weren’t in attendance.  Zeigler himself was absent, along with his cohort of Outsports/ You Can Play folks. An interesting narrative began to emerge.  Turns out that the gay sports advocacy community is engaged in a serious rift, vying for what little attention there is to get.  In summary:

Athlete Ally was founded by a straight man, Hudson Taylor, a former three-time All-American wrestler at the University of Maryland.  He began advocating for gay rights after learning of LGBT discrimination from gay people in his theatre classes.  He began wearing an LGBT equality sticker from the Human Rights Campaign on his wrestling headgear, and an overwhelmingly positive response inspired him to do more.   He has since gone on to turn Athlete Ally into a thriving 501(c)3 based in New York, implementing education programs and a network of ambassadors at over fifty college campuses.  He has also been a target of criticism from segments of the gay community, according to some.  Some have accused him of trying to “steal” Derrick Gordon’s coming out announcement, a story Zeigler co-published with ESPN. (Gordon worked closely with You Can Play on the announcement.)

According to the Deadspin article, somebody tried to publicly out Gordon before he was ready, a painful experience for the young man. (It should also be noted that Zeigler currently has the market cornered on gay athletes wishing to come out, and would probably like to keep it that way. He not only gets to orchestrate the coming-out-announcements, he can give himself part of the scoop.)

In the media workroom at Lucas Oil Field before the games Saturday evening, somebody had left a stack of light blue T-shirts that read, “Indiana Welcomes All.”

“Are we supposed to wear these?” a chagrined media member asked.

Out of perhaps 300-plus journalists, I happened to be assigned a seat next to Zeigler in the press section.  He was back to the pink sports coat, and managed to spot a couple of kids in the Duke student section below us waving a rainbow flag.  Down the stairs he raced for a photo op.  After I told him that I’d interviewed a Duke alum who planned to wave a rainbow flag, and kiss his boyfriend if Duke beat Michigan State, he scanned and scanned the 79,444 fans in attendance for more rainbows.  If one was out there, it had been subsumed by the far greater spectacle.