Aurora shooter's mom pleads for mercy: "He has a disease that changed his brain" 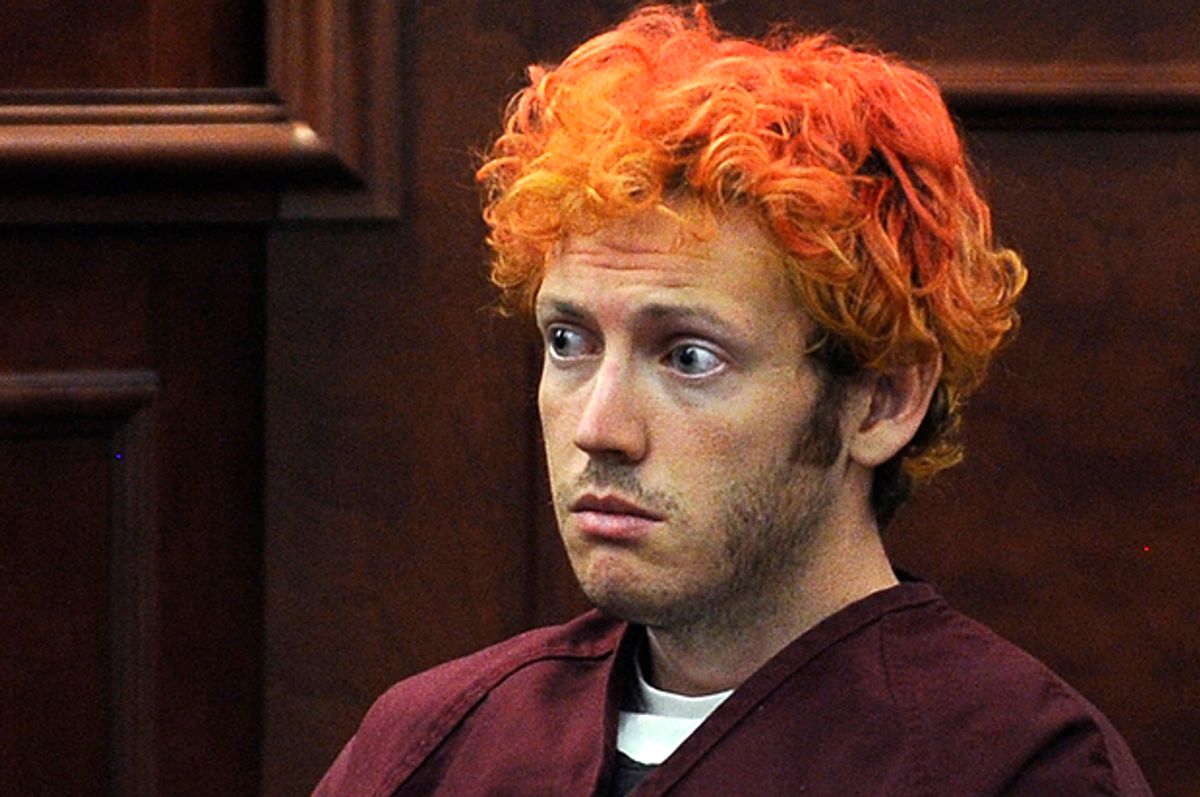 There is no question that the acts James Eagan Holmes is accused of committing were monstrous. But do they make him a monster? Do they mean he deserves to die? Those answers will soon be in the hands of a jury. But in the meantime, his mother is speaking out -- and with a plea for compassion.

Holmes is currently is prison, awaiting opening statements in a trial that is set to begin on April 27. He faces the death penalty for the July 20, 2012 mass shooting in an Aurora, Colorado movie theater that left twelve people dead and seventy injured. His defense has entered a plea of not guilty by reason of insanity. Last December, his parents expressed the hope for a speedy trial and a guilty plea in exchange for life in prison. "If that happened, our son would be in prison the rest of his life," they said in a joint statement at the time, "but no one would have to relive those horrible events at a trial the media has permission to televise." Now, however, as the court date approaches, his mother is revisiting those "horrible events," via a new self-published book entitled "When the Focus Shifts: The Prayer Book of Arlene Holmes 2013-2014." The Hollywood Reporter reveals that "Much of the book is taken from her handwritten daily prayer journals she began writing in January 2013."

In it, she writes, "People think he is a monster, but he has a disease that changed his brain." She prays for her son's prosecutors, saying, "I don't know why you want to pursue the death penalty for a mentally ill young man." And she claims that "This book is being published to raise awareness of the immorality of the death penalty. Severely mentally ill people need treatment, not execution." Mrs. Holmes has vowed to donate the proceeds from the book to "medical and mental health services."

James Holmes' mental history is murky, though it seems he underwent some abrupt personality changes prior to the Aurora shooting. He dropped out of his neuroscience PhD program just a month before the shooting. His defense has claimed that he had been recently under psychiatric care. In early July of 2012, he sent a text to a fellow student asking if she had ever heard of dysphoric mania – a severe form of bipolar disorder that can lead to paranoia and violence. And he told her she should stay away from him, "Because I am bad news." After his arrest, he was placed on suicide watch after what law enforcement described as a series of "half-hearted" attempts on his own life.

Accounts of Holmes' behavior, prior to and following the Aurora massacre, paint a disturbing picture of a man veering out of control. In December, his parents issued a public statement in which they said, "He is a human being gripped by a severe mental illness. We have always loved him, and we do not want him to be executed." But others, including some directly impacted by the events of that July day, have been vocal in their dissent. Marcus Weaver, who was shot in the arm and whose friend died in the attack, has expressed skepticism of any attempts at "sympathy for a man who has done a horrific thing" and says, "To give a person who committed such a calculated, horrific crime a life sentence, to me that's like giving him a slap on the wrist." Caren Teves, whose son Alex was killed, told Yahoo News last week that the new book is "an insult to our son’s memory and to our family," saying, "I struggle to understand how this individual could possibly pray for, by name, the thousands upon thousands of innocent people who continue to be directly impacted by her son’s evil, premeditated acts. The release of this book is nothing more than a calculated attempt to influence members of the jury. Almost three years after Alex was executed in that theater, she has never even extended the decent act of a simple apology." And Melisa Cowden, whose ex-husband Gordon Cowden was also killed, says simply, "He's not mentally ill."

Yet as a 2014 report by the Guardian reveals, the US does have an extensive track record of severe punishment for the mentally ill. In 2005, Andre Thomas was given the death penalty in Texas after killing his wife, his son, and stepdaughter. Thomas, a paranoid schizophrenic, later pulled out an eye and ate it, claiming he had to in order to keep the government from reading his thoughts. He is still on death row. And in 2013, Florida executed John Ferguson, a schizophrenic who was involved in the deaths of at least eight people. His final words were "I am the Prince of God and I will rise again."

Whether Holmes is a cold-blooded murderer or a severely mentally ill young man is still a matter for the justice system to work out -- and to then determine what do about. And I cannot for the life of me imagine who – aside from the morbidly curious -- would buy a prayer book written by a killer's mother. But I do believe that Arlene Holmes' pain is real and profound. I believe that living with the knowledge that your child has done unfathomably horrible things must be unbearable. I also believe that the challenge – not just for the people will ultimately decide Holmes' fate but for all of us when we look at acts of such extreme violence – is to find the human being within his most inhumane deeds. Not to excuse him, but to understand him. Otherwise, how else can we judge him? And how else can we hope to intervene in time for some other young man when he warns someone else to stay away, and that he's bad news?