Inside the NBC News "nightmare": How Brian Williams sent Tom Brokaw into "spasms of anger" 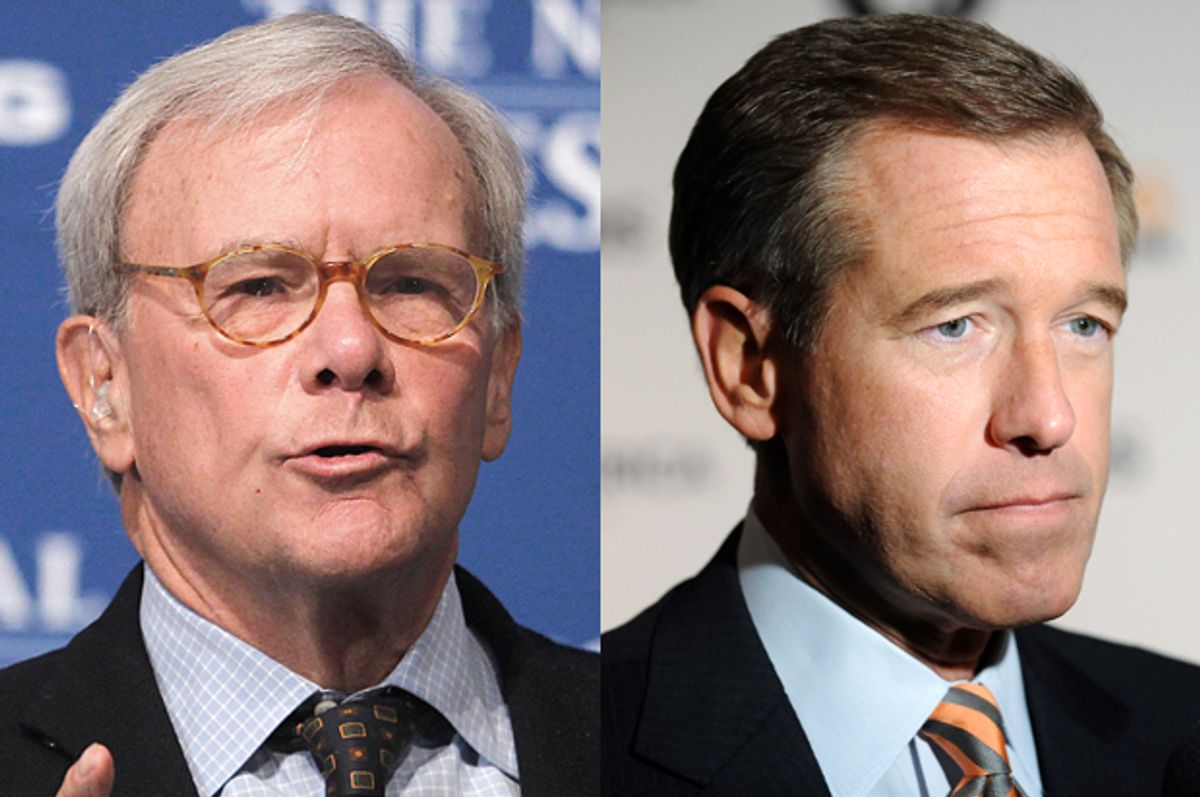 The May issue of Vanity Fair features an unforgiving in-depth report on NBC News, focused in particular on anchor Brian Williams' fall from grace. However, the article, written by Bryan Burrough, reveals a series of ill-advised managerial and business decisions that plagued the network long before Williams admitted that he had invented one of his memories.

Here are some of the most fascinating tidbits:

Comcast didn't really know how to run a news network:

While NBC's primetime lineup has famously struggled to remain competitive in recent years, NBC News remained an industry leader, thanks to the success of programs like "Meet the Press," the "Today" show, and "NBC Nightly News" with Brian Williams. However, when Comcast took over NBC News with the acquisition of its parent company, NBC Universal, it appointed its own leadership -- including Patricia "Pat" Fili-Krushel and Steve Burke, neither had experience in journalism -- and stuff started to hit the fan:

“You have to understand something about Comcast,” says another recently departed NBC executive. “There’s practically no attention paid to actual domain expertise—like, zero. The fact of the matter is, in certain businesses, certain things matter. If you’re going to be made the head of a shoe business, you need to actually know that shoes need to be sourced and designed. In the big corporate vision of NBCU, there’s almost no regard for that line of thinking. If you fit into a mold, if you fulfill a loyalty obligation or a don’t-make-waves obligation, or if you can just be pegged into the Comcast pegboard, you get to be in charge of stuff. That’s Pat.”

They in turn appointed people who didn't know how much about the division they were running:

One senior NBC executive said that Deborah Turness, the newly-appointed head of NBC News  -- who had never worked in American television (she is British) -- was flailing:

"News is a very particular thing, NBC is a very particular beast, and Deborah, well, she really doesn't have a fucking clue. She's letting the inmates run the asylum. You have kids? Well, if you let them, they'll have ice cream every night. Same thing in TV. If you let the people on air do what they want, whenever they want, this is what happens."

"I have seen no evidence [Turness] knows what she's doing, but in fairness, she walked into a complete shitstorm there. 'Today' is a horror show. Brian Williams? He didn't give a rat's ass what Deborah Turness says. But this is fundamentally not a Deborah Turness problem. She's just a symptom of the problem... This is a Comcast problem."

Take the following quote, for example:

"What always bothered Tim [Russert] was Brian's lack of interest in things that mattered most, that were front and center, like politics and world events," said a source who knew both men. "Brian has very little interest in politics. It's not in his blood. What Brian cares about is logistics, the weather, and planes and trains and helicopters."

“You know what interested Brian about politics? Brian was obsessed with whether Mitt Romney wore the Mormon underwear.”

Some insiders think he wanted to be an entertainer

"Suddenly, he's appearing on all these shows, 'Jimmy Fallon,' and '30 Rock and everything else. This spread the idea in Brian's mind that he was this kind of newsman-entertainer. That he was a national raconteur."

Another former exec said it seemed his heart was with these shows, and at NBC, "that's seen as running away from the news division."

But one defender noted that this is exactly why people liked him:

"The irony is that the very things people are criticizing Brian for now were the things they loved most about him at the time. The fact that by going on all these shows, with their young audiences, he was building bridges to the younger people who weren't watching network news anymore."

Tom Brokaw and Williams do not get along

Pat Fili-Krushel, the head of NBCUniversal News Group, invited Williams to introduce Tom Brokaw at a gala last year honoring Brokaw for his work with the Multiple Myeloma Research Foundation. Brokaw does not like Williams, and was infuriated when he told the now-infamous "Berlin Wall story."

A hint of the trouble to come, and of the tensions among the marquee players, was on display at a charity gala in Greenwich, Connecticut, the week before Horowitz’s firing. The evening honored Tom Brokaw’s work for the Multiple Myeloma Research Foundation, which helps fight a cancer from which Brokaw suffers. “The lowest of lows had to be that dinner,” says one former NBC executive. “It was a huge deal for Tom. The world turned out. Tom was devastated to find out that Pat Fili, who is just so blind to the relationships and what really went on, told the people putting on the dinner that it would be great to have Brian introduce Tom. That was the last thing Tom wanted. And then Brian started off telling stories. He told the Berlin Wall story. Well, this sent Tom into spasms of anger.”

Later, when Williams' fabrications were exposed, Brokaw was "livid," said one friend. "Tom didn't push Brian out, but he didn't try to save him either."

"He couldn't say the words, 'I lied.' We could not force his mouth to form the words 'I lied.' He couldn't explain what had happened. [He said,] 'Did something happen to [my] head? Maybe I had a brain tumor, or something in my head?' He just didn't know. We just didn't know. We had no clear sense what had happened. We got the best [apology] we could get."