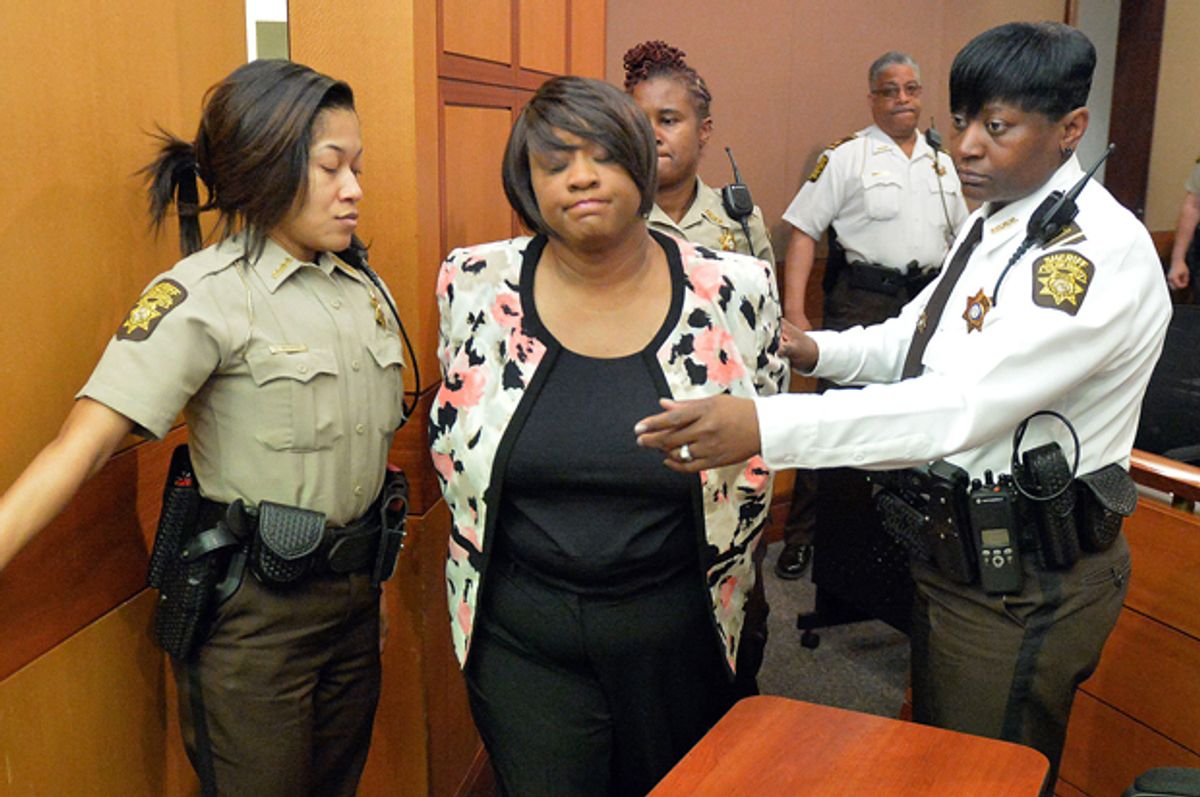 Last week, an Atlanta jury convicted 11 teachers and school administrators of racketeering in a system-wide cheating scandal. Yes, you read that correctly. Teachers and administrators inflating student scores on standardized tests is now considered “organized crime” in this country, and is punishable by more 20 years in prison, in these cases.

I am an educator. I am a Black woman who may someday mother a Black child. I have taught other Black mothers' children. Much of my educational success in elementary school is directly attributable to high performance on standardized tests that caused my white teachers to notice me and intervene on my behalf to get me “tracked” into higher-achieving classrooms. I believe all children deserve access to a good, high-quality, public education.

Therefore, I don’t have to condone cheating in any form (and I don’t) to assert that what has happened in Atlanta to these teachers is a travesty. The pictures that emerged last week of handcuffed Black schoolteachers being led out of Southern courtrooms in one of the country’s largest urban Black school systems were absolutely heartbreaking.

Scapegoating Black teachers for failing in a system that is designed for Black children, in particular, not to succeed is the real corruption here. Since the early 1990s, we have watched the deprofessionalization of teaching, achieved through the proliferation of “teacher fellow” programs and the massive conservative-led effort to defund public education in major urban areas throughout the country. There is no longer a consensus that a good public education -- a hallmark of American democracy -- should be considered a public good.

Black children have for generations been the primary victims of this continuing social mendacity about the national value of education. More than 51 percent of children who attend public schools live in poverty. In Georgia, the percentage of Black children living in poverty hovers right around 39 percent. For Latino children, the number is consistently over 40 percent. Nationally, the number for Black children is 39 percent, according to most recent data, and 33 percent for Latino youth.

These numbers taken together paint an abysmal picture of students who are disproportionately poor, over-disciplined, and systematically “tracked” out of high-performing classrooms. And yet we expect teachers to work magic in conditions that are set up for failure.

Lest you think this is merely an Atlanta problem, over at the Crunk Feminist Collective, Susana Morris tells a similar story of attending a predominantly Black high school in Florida with advanced classes that were overwhelmingly white.

Her story mirrors my own. In Louisiana in the 1980s and 1990s, students took two standardized tests. One (the LEAP test) measured basic proficiency and the other (the California Achievement Test) measured more advanced proficiencies. In the third grade, I scored 100 percent on the LEAP test, the only student in my overwhelmingly white class to do so. The teacher Mrs. Callender called me up to the front of the room and bragged about me to all the other students. That same year, on the CAT Test, I scored in the 89 percent percentile.

Meanwhile, I noticed one day during class that several of my white classmates, among them my best friend Amanda, were all mysteriously led out of class and then returned later, with no explanation. When I asked Amanda where she’d been, she said school officials had made her take a test, but she wasn’t clear what for. She never mentioned it again.

The next year, fourth grade, I walked into a classroom and met Beatrice Gaulden, one of only three Black academic teachers I would ever have. With her neon green and yellow Hammer-pants, her penchant for drinking eight tall glasses of water a day, and her strict instructions each morning  -- we were not to approach her desk, but rather to wait until she moved to a stool in the front of the room for open discussion time -- she was a wonder. Mrs. Gaulden is a character in most of my childhood stories of transformation because she was so pivotal to my own sense of self-worth as an outspoken, bossy, loquacious, bespectacled, ponytailed Black girl in a predominantly white classroom.

Because of Mrs. Gaulden’s instruction, my test scores leaped from the 89th percentile to the 99th percentile within one year of instruction. She never taught to the test. She simply taught.

That year, the Louisiana Gifted and Talented Program came calling for me, as they had called for my friends the year before. I took the battery of tests they offered, no doubt because Mrs. Gaulden had asked them to look at my case. They came back to her (she would tell me years later) and told her that I had not passed the tests. She implored them to rescore my assessment. They came back to her and reported an error in their scoring. (As if.) And so I became a “gifted and talented” student, with even smaller classes, more specialized instruction, early opportunities to take the ACT and SAT, and to travel. I soared with the additional resources provided by the G/T program.

But my educational access was due to one magical Black teacher who saw a spark in me and nurtured it. Mrs. Gaulden nurtured, taught and challenged all her students regardless of race, but she saw in me a Black girl who needed extra guidance, and a little push, and she willingly gave it.

Over the past generation, we have watched the GOP, helped along by an impotent Democratic Party, systematically dismantle funding for public education, underpay teachers, and allow local school systems to institute punitive disciplinary measures that have turned our schools into a prison pipeline. At exactly the same moment, these reformers and their political counterparts George W. Bush (No Child Left Behind) and Barack Obama (Race to the Top) have instituted high-stakes testing, tied to financial incentives for teachers, as the solution to the structural risks overwhelmingly facing children of color.

Meanwhile, test-cheating scandals have proliferated in locales across the country. In other urban locales like Baltimore, Houston and Philadelphia principals and teachers were fired and/or stripped of their licenses to teach. This is a punishment that fits the crime.

Then there's Michelle Rhee, the famed former chancellor of D.C. Public Schools who was accused of creating the very same culture of fear about test scores that Superintendent Beverly Hall has been accused of creating in Atlanta. Hall was charged with racketeering. So why was Rhee not subject to prosecution when test-score irregularities emerged in the District? (Bruce Dixon was already asking as much two years ago over at Black Agenda Report.) Not only has Rhee not been prosecuted, but she maintains a fairly high level of bipartisan support from conservatives and political centrists for her views on education reform.

Locking up Black women under the guise of caring about Black children is an unbelievable move in an educational environment that systematically denies both care and opportunity to Black children. Locking up Black women for racketeering when the system couldn’t be bothered to lock up even one of the bankers who gave disproportionate amounts of terrible home loans to Black women leading to a national economic crash and a disproportionate amount of home foreclosures among Black women in 2008 is patently unjust.

Given that public schools are largely funded through property taxes and that Black children are overwhelming reared by Black single mothers, the failure to vigorously prosecute the financial institutions and lenders that gutted Black neighborhoods means that the system co-signed corporate acts of institutional violence against Black mothers and children, and against neighborhood schools in Black communities.

But now we are expected to believe that prosecuting these teachers as racketeers is an act of justice. Nothing is just about making Black women sacrificial lambs of an educational system hellbent on throwing Black children away. The images of their handcuffed Black bodies being led in shame from the courtroom gives Black parents angry about the miseducation of their children a convenient target for their angst and outrage over a failing system. Meanwhile, the real racket – privatization and defunding of public schools, diversion of taxpayer resources away from education, and increasing political clout and payouts for school reformers proselytizing the false gospel of high stakes testing – gets obscured. And white children still get educated well, either in private schools or in suburban schools funded through a solid property tax base.

Everything I am today, I owe to my mother and to a Black teacher who saw a spark in me and nurtured it. For so many exceptionally achieving Black people, a providential encounter with a Black teacher is the singular thing that made the difference. No other group of people systematically and structurally love and care about Black children more than Black mothers and Black (usually female) teachers. They have been the ones holding aloft the banner emblazoned with the revolutionary idea that Black Lives Matter, before it was ever a slogan upon which to build a movement. An attack on Black teachers is an attack on Black children, Black families, and Black communities. We should stand in solidarity with these teachers and these students and say, “Not on our watch.”