"Louie" returns, as hapless and sublime as ever

Louis C.K.'s fictional alter ego keeps fumbling for connection in one of TV's most confident and distinctive shows 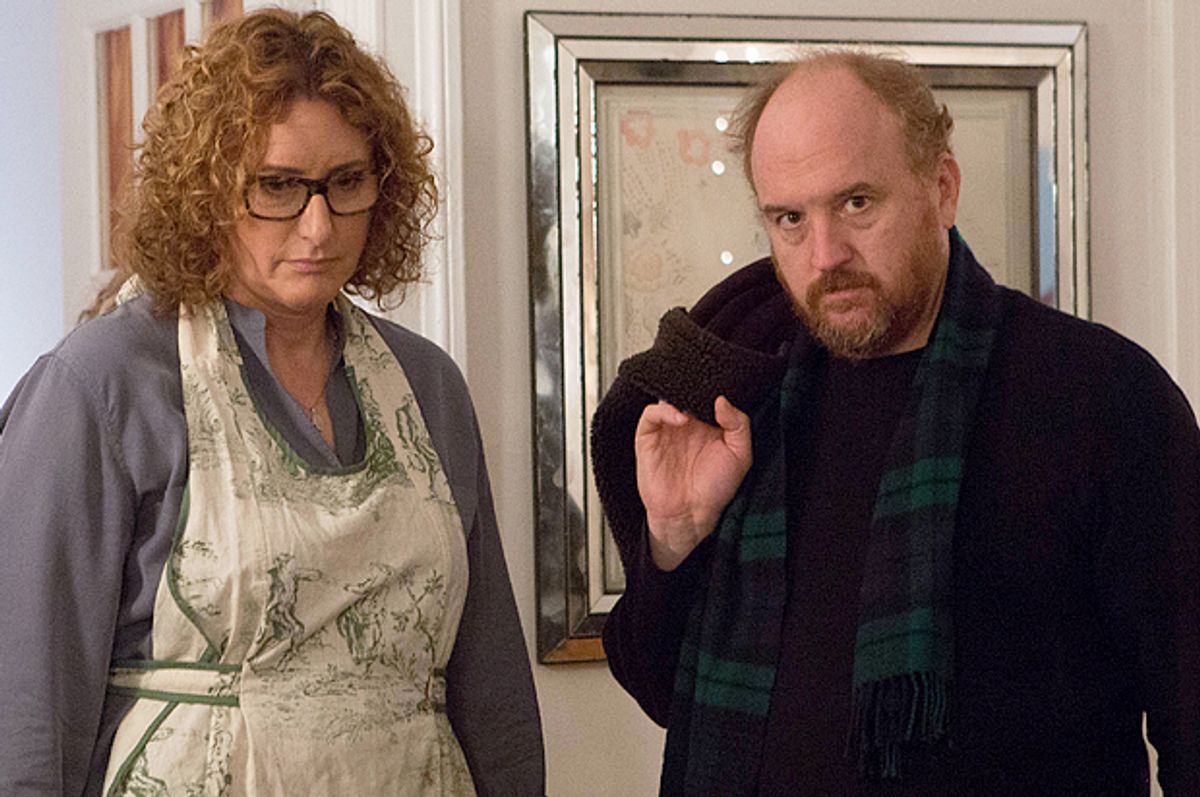 “Louie” is a treasure. The FX comedy's fifth season reveals a show that is as confident and distinctive as ever, a sitcom that is not quite like anything else on television. “Louie” forces harmony from its many disparate elements—stand-up, sketch comedy, character drama, family sitcom. It straddles the divide between comedy and tragedy; it straddles the divide between fiction and reality, too.

At its heart is, of course, comedian/actor/director/writer Louis C.K., who has become one of the TV’s greatest comedians tackling TV’s trickiest issues—race, gender, sexuality, class—on a regular basis. It’s clearly what interests him—not just the contradictions and ironies of the world he lives in, but the frailties and prejudices of his own mind. What makes “Louie” work, time and time again, is that C.K. goes in as hard on himself as he does on the world around him—harder, perhaps. The show is suffused with a take-no-prisoners poignancy that spares no one, and that makes it sublime.

Louie starts this season of “Louie” talking to his therapist:

I dunno. I guess I feel like I’m not that good anymore at navigating between the good times and the bad times. I don’t really know how to live a life anymore. And it’s scary. I’m not that great anymore at coming up with a reason to keep trying. And I’ve started to feel something that it’s like—it’s like a depression. A real depression. And then I’m like—oh my god, I’m a boring asshole now, that’s what I am. I’m boring! Ah, goddammit.

What you can’t see is the interplay between Louie’s words and the increasingly threatening silence of the therapist—a silence so profound that Louie seems to be embellishing as he goes along, or maybe just hyperbolizing, before giving up on the moment entirely. It’s a nutshell of what is, perhaps, the larger theme of season five (if “Louie”’s seasons can really be said to have themes)—haplessness, even at the height of his career’s powers. There’s always been some kind of haplessness, to be sure. But as the show has matured, C.K. has devoted seasons to one or two topics he finds fascinating. Last season, it became a very personal, relationship-driven show; the season before that, C.K. was thinking more about his career, and spent several episodes contemplating a late-night TV gig.

This season, it’s a bit less focused. Louie’s older; his kids are older; and he’s semi-involved with a woman he mostly loves, Pamela (Pamela Adlon, a producer on the show). “Louie” himself seems unchanged, though, and that’s the driving forward motion of the plot. He’s still apt to get sucked into a random stranger’s drama; he’s still a pushover until he abruptly decides he isn’t; he’s still rude in ways that Louis C.K. can see but Louie himself can’t, in the moment.

The first episode back, “Potluck,” bounces between a few different stories with strange misdirection. The therapist’s session is quickly forgotten (as so many therapy sessions are), as Louie determines to involve himself in his daughter’s classmates’ potluck—a gathering for the stuck-up parents of her classmates. He spends some time cooking, which is a passion for him, and brings his excellent fried chicken to the potluck. But anxiety and miscommunication lead him to the wrong potluck, and by the time he figures out his mistake, all the chicken is gone. There’s some kind of message there, about misapplied energy, good intentions gone awry, and the final end of the fruits of our labor. But it’s hard to tell exactly what, and Louie doesn’t have time to think about it—he’s got to get to the potluck.

But it’s this futility that permeates the first four episodes of the season (which were the four sent out to critics). Louie tries to help; Louie tries to improve; Louie tries to make amends. Nothing quite works out as it’s supposed to. He’s too neurotic to really give himself up to the whims of the world, but too sensitive to not notice that he’s missing a piece of something much bigger.

Yesterday, when I wrote about Jimmy McGill, Bob Odenkirk’s character in “Better Call Saul,” I noted that the tension between comedy and drama boiled down to how the character felt about his own life in that moment. When Jimmy can have some hope, some faith, the vagaries of the world seem manageable. When he can’t, they become oppressive. The same could be said for “Louie.” When Louie’s able to connect to someone—anyone—he can find the comedy. What becomes more and more clear, in his misadventures as a divorced dad and professional comedian, is that often, the only person Louie is truly connecting with is the unseen audience member. But that connection does seem to be more than enough.