The "Liberal Media Conspiracy" on steroids: Inside the right's favorite new talking point

Rape. Inequality. Police violence: None of these things actually exist — at least if you work for Fox News! 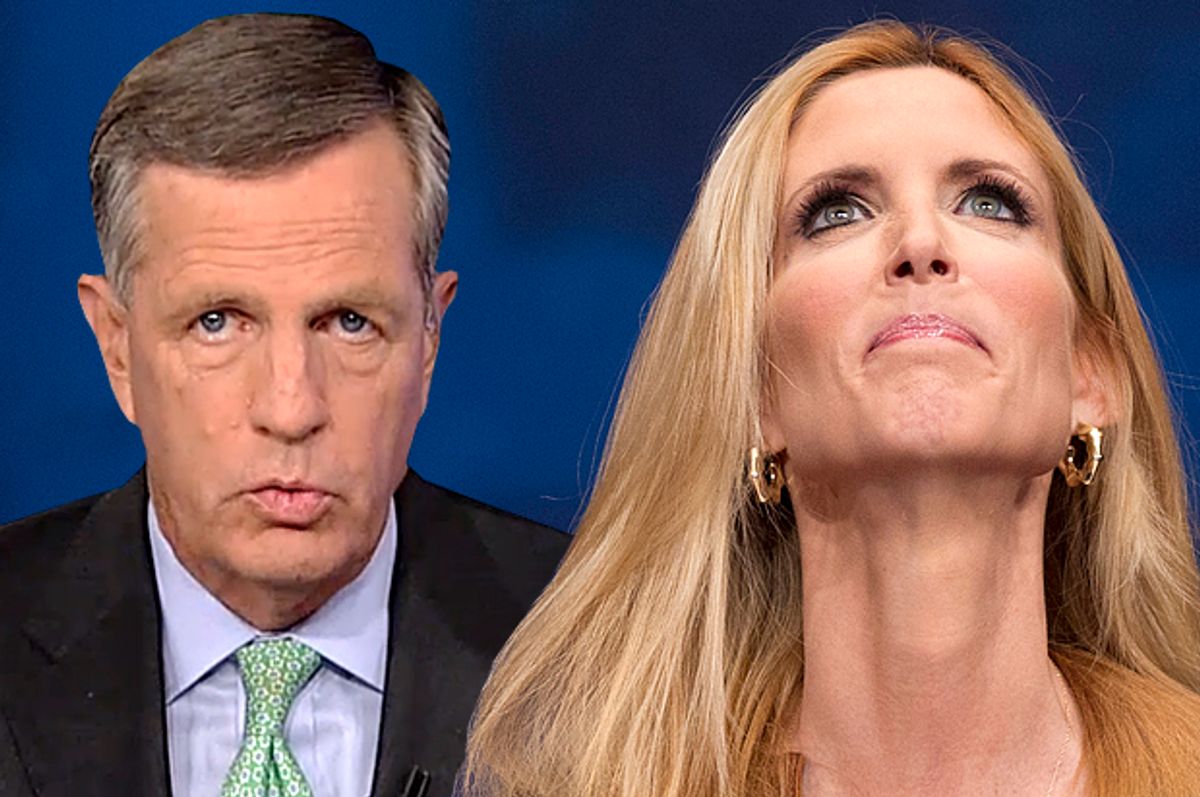 The journalism community is reeling this week after the release of a Columbia Journalism Review report on Rolling Stone's now-infamous UVA rape story. And, whatever else might be said on the matter, you cannot escape the fact that this is one case where hand-wringing and soul-searching actually is called for. This story has cast a black shadow over journalism and set back hard-won progress in recent years in bringing the crime of campus rape out of the shadows.

Oddly enough, conservatives are celebrating with high fives and wild excitement. Their happiness at the retraction of this story doesn't appear to be based upon the singular idea that an injustice was done to particular individuals, or that a fine public university's reputation (ahem) was wrongly besmirched. (Although they do pay lip service to that.) In reality, conservative jubilation over the Rolling Stone debacle is about something altogether more discomfiting: They evidently have staked out the position that rape doesn't happen very often and that women routinely lie about it. They are saying that the idea of rape being a problem on campus is a false "liberal narrative."

This is just one of a handful of recent controversies that are being bundled into a new meme about liberal lies and false narratives. Here's the thoughtful conservative pundit Ann Coulter with a short list:

After the Fukushima nuclear meltdown in Japan four years ago, Bill Nye “the (self-proclaimed) Science Guy” gravely informed CNN viewers, “This is all bad and very scary. … You know, it’s nothing but danger. It’s nothing but very serious, very, very long-term problems.” Wired magazine recently reported that, in the four years since the disaster, more than 96 percent of food, fish and agriculture throughout Fukushima has contained less than one-sixth of the radiation permitted in food imported to Europe.

Lena Dunham, star of HBO’s “Girls,” was forced to retract her autobiographical account of having been raped by a campus conservative named “Barry.”

The alleged rapist of Columbia University’s mattress girl finally released her alluring texts to him, and now we all know she was a desperate, spurned lover, not a rape victim.

Sabrina Rubin Erdely’s much-celebrated Rolling Stone story about a fraternity gang-rape at the University of Virginia turned out to be based on one poor, sad girl seeking attention by creating a fake online boyfriend and fantasizing her own gang-rape.

This is Ann Coulter, though. Surely more reasonable conservatives aren't taking this view. After all, just because a single story turns out not to be true, common sense says that it doesn't mean that all such stories aren't true. It's one thing for right-wing bomb throwers to feed these absurdities to their audience but surely serious journalists have to be aware that one bad example does not refute an entire thesis.

Rolling Stone magazine's overdue apology and retraction for its bogus story about that UVA fraternity rape brings to three the number of nationally exposed whoppers that have made their way into the national bloodstream. First was the claim that a white cop in Ferguson Missouri shot dead a young black man as he stood before him with his hands up. Then Senate Democratic leader Harry Reid refused even to try to defend his outright lie that Mitt Romney had paid no income taxes. And now the Columbia Journalism Review's indictment of Rolling Stone's recklessness on the UVA story. Three stories on widely divergent topics with one common thread: they all fit nicely into the favored political narratives of the American left. The claim of an epidemic of sexual assaults on college campuses. The idea of Mitt Romney and other businessmen as "fat cats" who unjustly enrich themselves at the expense of others. And the notion of American police forces as hotbeds of racist violence.

The three stories have collapsed but the larger claims they fed live on. Today at the White House, for example, a question to spokesman Josh Earnest about the UVA case. Was it about those falsely accused? Or the damage to the university or the fraternity? Of course not. It was about whether the exposure of the false story might quote, discourage other victims of sexual assault from coming forward.

The Rolling Stone music, you might say, has stopped. But the beat goes on...

Hume essentially says that there is no problem of rape on campus, no problem with wealthy businessmen using special loopholes to avoid paying taxes and no problem with young black males being unfairly targeted by police forces around the country. These are all just false "notions" that were given currency by lies and hoaxes perpetrated for the purpose of spreading a false narrative -- which now exist independently of the false stories that "fed" them.

This is, of course, nonsense. There is ample evidence that rape on campus is epidemic, that the wealthy are rigging the tax code to their advantage and that there is a serious problem with police violence against African-Americans. These particular stories were simply examples of existing problems. If a narrative has formed around these issues it's because of a preponderance of such stories over time and the data that backs them up.

But this isn't really what the right is so upset about, is it?

Brett Baier: There are false stories, wrong stories on the right as well ...

Hume: Sure there are. But can you imagine if something like this had happened at this network? And we had published an entirely false account of an event that never happened? No one associated with that account would still be working here. Not the journalist who did it, not the supervisors, not the executives who countenanced it. It would be all over. We just haven't seen that. And I think the reason is clear. It's different on the left.

It's always amusing to see the man who made a fetish out of using the phrase "Fair and balanced ... and unafraid" whine about powerful liberal journalists getting away with things his allegedly nonpartisan network couldn't get away with. It sort of gives away the game, to say the least. But more important, the idea that Fox News isn't guilty of promoting "narratives" based on false stories without repercussions is more than a little hilarious. From "Al Gore invented the Internet" to Swift Boats to Benghazi, Fox may not be the only news organization to peddle false narratives, but it is surely the one to make the greatest profits from doing it.

There are too many examples to cite in one short article, so let's just look at the so-called Benghazi scandal for the moment. Hume claimed early on that Fox News was the only network that did the "heavy lifting" on the alleged scandal, while the rest of the media sat on their hands. From the moment the story broke, the entire staff of Fox News ran with it as if they'd discovered a long-forgotten Dead Sea scroll and never looked back. And yet, when one investigation after another turned up no evidence of any of the charges Republicans and Fox News pundits had thrown out, Fox did not retract their stories or fire anyone who forwarded them on-air. In fact, they simply ignored these findings, or took a different tack on the same charges. Now that "narrative" will not die, in spite of the fact that all the evidence and all the data they have thrown out to support it has been disproved. (They have even continued to feature such shining journalistic stars as Sharyl Attkisson, the former CBS news reporter who claimed that her computer was allegedly hacked by the government, when it turned out that she had a stuck-down backspace key.)

Perhaps even more damning, if only for occurring outside the corridors of News Corp., is the example of "60 Minutes" chief foreign correspondent Lara Logan, who fell for one of the most elaborate hoaxes in modern journalistic history -- and ending with CBS having to retract its own sensational Benghazi report. Logan did not lose her job, but rather had to take a leave of absence.

And, interestingly, as the Washington Post's Eric Wemple pointed out at the time, Fox News relied on the same hoaxer for countless other stories. One of its correspondents even admitted on the air after the "60 Minutes" report aired that it had relied on his tales in its reporting. Evidently the network's only beef with him was that he asked for money, not that he was a liar.

Yet, oddly, and contrary to Brit Hume's bold assertions, no one was fired from Fox News and no retraction or apology was offered. And the Benghazi beat goes on.

Hume undoubtedly believes that Fox is a lone truth-teller in a sea of lying liberal media hoaxers who are marginalizing them at every turn. This is the "narrative" that right-wingers tell themselves about everything. As historian Rick Perlstein pithily observed:

What is remarkable about conservatism is how easily it hangs together. Conservative culture itself is radically diverse, infinitely resourceful in uniting opposites: highbrow and lowbrow; sacred and profane; sublime and, of course, ridiculous. It is the core cultural dynamic--the constant staging and re-staging of acts of "courage" in the face of liberal "marginalization"--that manages to unite all the opposites. It keeps conservatives from one another's throats--and keeps them more or less always pulling in the same political direction.

Or, as Hume plaintively sniffed at the end of his segment,"it's different on the left."

Oh, and Mr. Hume? I'd like to introduce you to a man by the name of Bill O'Reilly.