Black bodies on the ground: Shocking images spark #BlackLivesMatter outrage -- but at what price?

From Walter Scott to Emmett Till's open casket, we have to trade our trauma to the public for empathy and action 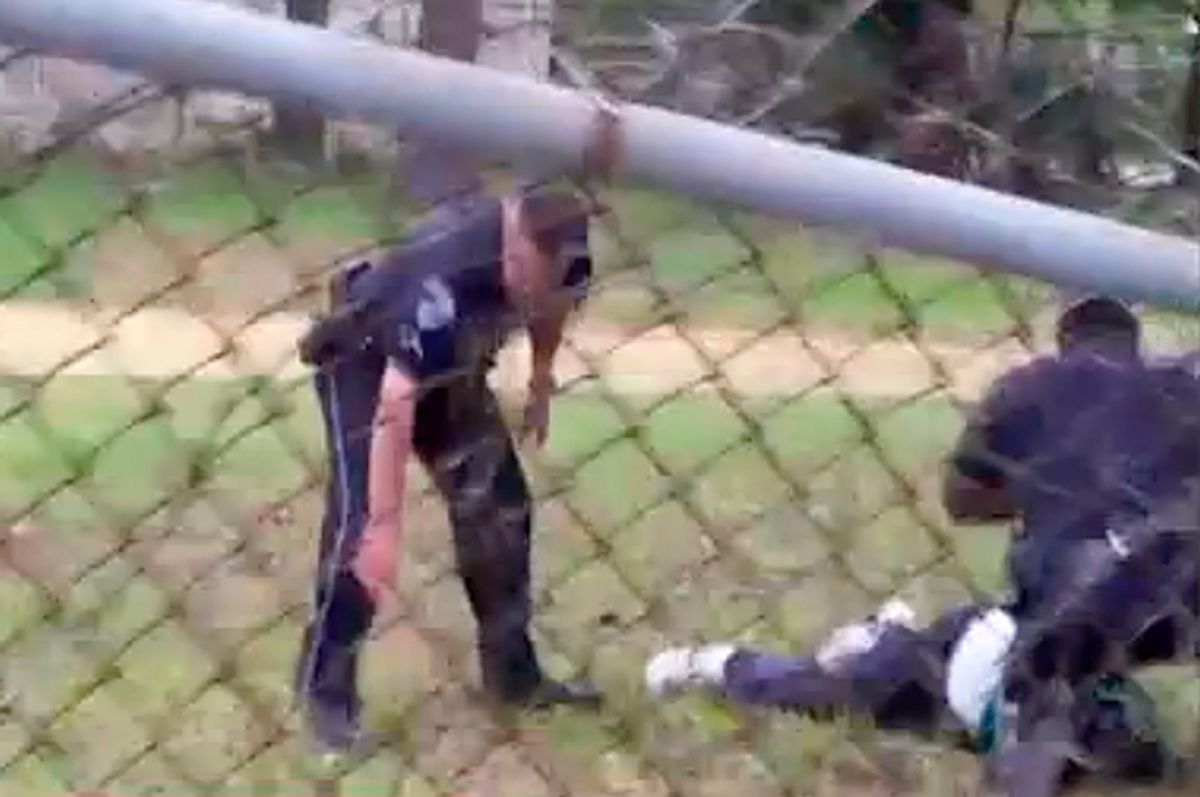 Tuesday afternoon, the video of Walter Scott’s shooting death by South Carolina police officer Michael Slager surfaced and spread across social media and news networks. I watched my Twitter feed transform in real time from a single tweeted link to a wall of headlines and #WalterScott hashtags. The emotions expressed on my timeline ran the gamut, having seen the familiar progression play out time and time again. For many of us, these past several months have been marked by frequent reminders of the violent ways American anti-blackness manifests across the country. Video after video of black bodies in the midst of violent encounters with police, photos of a lifeless black body in result, pictures of the blood still damp on the concrete—the whole repeatable process is seemingly displayed on every social media platform possible with alarming predictability.

A little under a week ago, I was scrolling through Facebook and came across a photo taken in the aftermath of the Kenyan campus massacre, at Garissa University College in Garissa, Kenya. I was, of course, initially taken aback by the sheer gruesomeness of the scene depicted. The second thing I remember thinking was how unremarkable the photo was—certainly not the mass violence preceding it, but rather the contents of the photo itself. Dead black people scattered about the frame. Limbs extended or folded unnaturally. Their own blood everywhere, on everything.

There’s something to be said—many something’s, in fact—about the way we are socialized in the U.S. to believe that violence of that scale is the exclusive and regularly-used tool of caricatured black and brown heathens across the ocean, but somehow that photo felt next door.  It was as if all the black bodies and all the death and all the blood had become its own boundary-less, twisted, fatalistic trope—not just the idea, but the visuals themselves. I was equal parts disgusted and unnerved by my reaction, but unable to name it at that moment, I chose to shelve it and revisit it again in a few days.

The passage of time did little to provide any clarity; it really just gave me time to think of questions I had absolutely no answers to. The photos of the classroom in Garissa, Kenya were being passed around social media—much like footage of fatal traffic stops or photos of deceased black men and women killed by police—for a number of reasons: to demand coverage from major media outlets, to agitate moderates to action, to increase awareness about a specific crisis or a series of them, to convey the urgency and scope of said crisis, to provide evidence of the necessity of “the work”, to prove that affirming the value of black lives is an imperative and time-sensitive endeavor—the list goes on.

Black death, black pain and black trauma are, in so many ways, useful. But should they be? I remember in February, after hearing news of Ladarius Williams’ shooting death (yet another) by St. Louis police, a friend mentioned that the news gave her motivation to organize. I remember sitting in a meeting last winter with protesters who were planning a theatrical action outside of the Old Courthouse in downtown St. Louis. I remember them talking about how useful it would be to have female volunteers play the role of grieving mothers. I remember the power of seeing mass die-ins at universities, medical and law schools, and places of business all across the country, but I also remember the umpteenth die-in we did on campus on the six-month anniversary of Mike Brown’s shooting death — how so many peers walked over us and the metaphor this suggests, how empowered we did not feel, the way all of my black friends crumpled into themselves afterwards. And here, I began thinking seriously about cost.

We all know that black death and black pain and black trauma are serviceable, profitable even, in the wrong hands. Bits and pieces of black personhood have been cordoned off and sold to the highest bidder by various means for centuries. The purpose of this questioning is not to provide any answers about the functionality of black death and black pain and black trauma, but instead to wrestle with the reality that for generations of black people in the United States, the cost of survival has been known to require unimaginable things, and to ask impossible questions about the usefulness of our suffering.

So then we begin to ask: what visuals are we normalizing in exchange for media coverage from news outlets that don’t view our survival as a priority? How does our grieving process change if we’re forced to do it publicly? How does healing change if the trauma we witness has to be publicized in exchange for sympathy from largely unreliable swaths of the population? What does it mean to fight anti-black violence and advocate for the value of black lives by publicizing visuals of our death?

And even more ominous, when we cry openly and no one mourns with us, when we lay on the ground and act out our own deaths and no one pauses on their way to class, when we share the photos and the media cavalry still doesn’t come, what are we teaching ourselves? What is the psychological cost of building a movement predicated on displaying our individual and collective grief, suffering and death? What is the cost of this?

I imagine that for student activists in the '50s, the idea of non-violence asked unimaginable things and presented impossible questions. Their organizing and intensive training despite this has since provided us with photographic and video evidence of the cruelty and brutality of American racism. I imagine that for Mamie Till, her son’s brutal murder asked unimaginable things and presented impossible questions, too. Her decision to have an open casket left us with an iconic photograph that did far more than simply make the cover of TIME Magazine. But consider what the black people being faced with these choices are being asked to risk. Decades later, we can look back on those choices (*cough*) with gratitude and admire the selflessness, but consider the status of a people repeatedly being required to put themselves in such precarious positions, in order to simply say that they deserve to be alive.

Consider the cost, if the usefulness of black pain, black grief, black trauma had not “paid off” in the way history suggests. What happens if it doesn’t pay off for us, right now?

I present these questions to admit again, like so many black theorists and activists and writers have known and said for decades, that black Americans more often than not are placed in incredibly unnatural social and psychological predicaments with few resources to navigate them without some cost to either themselves or their community, or oftentimes both. We’re existing in a crisis moment that, again, calls on us to fight for our survival in a myriad of ways. My hope now is that our sanity and humanity will remain whole for the duration of the fight.