Yeah, this guy is pretty strange 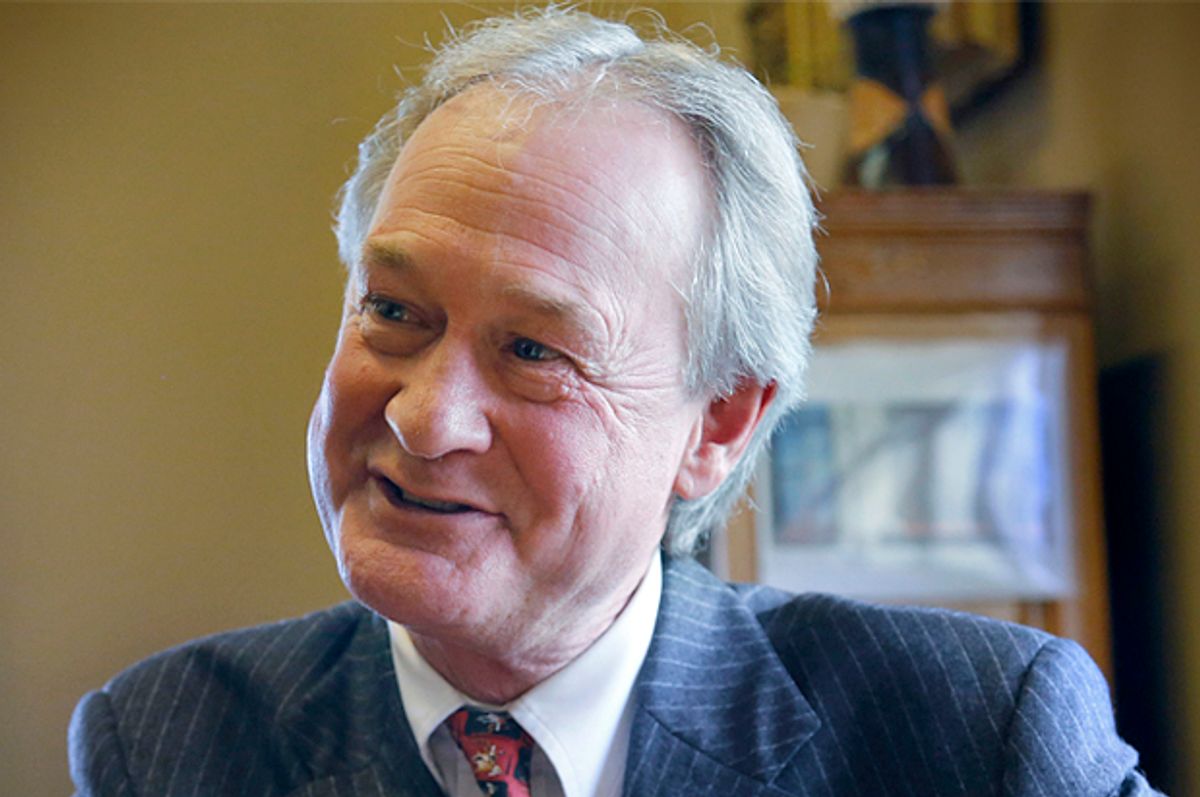 I recently walked away from a lengthy interview with former Rhode Island Governor Lincoln Chafee with a clear idea of how he sees himself.

Chafee used the words “ethical” and “competent” repeatedly to describe his governing style, and, toward the end of our conversation, he rang off “five basic tenets” that haven’t changed during a political career that includes stints as a Republican, Independent and Democrat; and time as a city councilor, mayor and U.S. senator. Chafee believes in standing up for clean air and water, fiscal responsibility and staunchly defending personal liberties. (“If you’re gonna tap our phones, go get a warrant,” he told me.) He believes government can be a force for good in people’s lives, and he is “very averse to foreign entanglements and quagmires.”

That, in a paragraph, is how Lincoln Chafee -- one of the newest entrants to the 2016 presidential race (although, technically, he's just "considering" a run) -- describes his political brand. But, as a Rhode Island journalist with a front-row seat to Chafee’s last few years, I feel compelled to add a few more words: This guy is weird.

Chafee isn’t demographically weird, of course. He’s an enormously rich, 62-year-old, Andover-educated white guy who likes to sail. The Chafees were among Rhode Island’s founding families, and as Mother Jones pointed out -- in a post titled “Finally, a Candidate for People Who Think Jeb Bush Isn't WASPy Enough” -- his “father, great-great grandfather and great-great uncle all previously served as governor.” Travel around Rhode Island and you’ll see Chafee Hall at the University of Rhode Island, the John H. Chafee Center for International Business at Bryant University, the Pell Chafee Performance Center in Providence and the John H. Chafee Fitness Center at the Newport naval station.

But none of this precludes Lincoln Chafee from being a strange bird. And I’d wager that his utter quirkiness was the reason a number of folks took his April 9 presidential-candidacy announcement as a belated April Fool’s joke.

Chafee is so bereft of polish and charisma that, depending on your viewpoint, he’s either an endearing political Mr. Rogers, or, as Rhody talk-radio shock jock John DePetro tweeted after the announcement, an “incompetent buffoon.” I recently heard one local political consultant compare Chafee’s trademark facial expression to that of a guy telling you that he just ran over your dog. And when things go sour -- as they frequently did during Chafee’s gubernatorial term, which included a hurricane, abysmal employment stats and the collapse of former Red Sox pitcher Curt Schilling’s Providence-based video-game company, 38 Studios, which the state had lent $75 million – this affect can start to grate. Perhaps there are politicians who can get away with saying “Don’t trust your dealer right now” during a conversation about a fatal overdose crisis. But Chafee isn’t one of them.

But this is all surface-level, subjective stuff. Let’s talk facts – which, in Chafee’s case, are fittingly eclectic. He was a professional farrier (someone who shoes horses) for years before entering politics. He’s admitted to tooting a bit of cocaine in college. He was an early advocate of legalizing same-sex marriage in Rhode Island, long before he was able sign the bill making it a reality, in 2013. His approval rating hovered in the 20s during his time in office.

Rhode Island recently unveiled Chafee's official gubernatorial portrait, which features an unusual, midnight-dark background. At the time, the Providence Journal wrote, "Lincoln Chafee may best be known as the party-switching politician who stubbornly blazed his own trail whether it landed him in thorns or not. Soon, his image of nonconformity will hang in the State House in perpetuity."

But he has a tendency to trip over his own two feet, as he did during a kerfuffle about how to refer to Rhode Island’s seasonal State House spruce tree. The “Holiday Tree” fiasco went national, and when you watch Chafee’s 2012 appearance on "The O’Reilly Factor," he can’t seem to decide whether he’s sticking to his guns on principle (“This is a public building...this is a secular building”) or because he was simply following the lead of his predecessor, as he frequently mentions.

At one point, O’Reilly tells him, "You're in the minority, you're imposing your will, and you're making people unhappy in a season of joy!"

Things have gotten even more bizarre than that. During one 38 Studios-related spat with Curt Schilling, he brought up allegations that the pitcher faked his "bloody sock," a largely discredited conspiracy theory that sprouted following the Red Sox' now-legendary pennant victory over the New York Yankees in 2004.

Another WTF moment came in the days before Rhode Island’s 2014 Democratic gubernatorial primary, when Chafee endorsed the inexperienced long-shot candidate, Clay Pell, who was perhaps best known for frequently misplacing his Prius and being married to Olympic figure skater Michelle Kwan. (Pell predictably lost by a double-digit margin.)

Rhode Island has never fielded a major-party presidential candidate, despite its knack for producing memorable political characters. This is the state that produced Buddy Cianci, the twice-convicted, long-serving Providence mayor famous for the political dictum, “The toe you stepped on yesterday may be connected to the ass you have to kiss today." One of our former governors got caught diving in a Dumpster outside of a Walt’s Roast Beef for a bag of cash, while another governor -- Chafee’s predecessor, Donald Carcieri – told reporters during the embryonic stages of the 38 Studios disaster, ‘‘There is only a risk if everything goes wrong.” Last month, our former House Speaker Gordon Fox pleaded guilty to, among other things, taking bribes via check.

Against this backdrop, Chafee -- who, to his credit, really does seem incorruptible -- can occasionally take on an aura of heroic weirdness. After all, our state founder and hero, Roger Williams, was booted out of the Massachusetts Bay Colony for his quirky ideas about separating church and state. (“Forced worship stinks in God’s nostrils,” Williams once said.) Chafee has had Williams-ian moments, like when he vetoed a bill allowing state-issued “Choose Life” license plates, writing, “It is my belief that state participation in the transmission of funds to this organization would violate the separation of church and state, one of the fundamental principles upon which our state was founded.”

But then he goes and quotes Taylor Swift to cap off a “State of the State” address, and we’re reminded that this is Lincoln Chafee, who is now, apparently, running to be leader of the free world.