Madonna, Drake and that "surprise" kiss: This is what sexual consent doesn’t look like

Audiences are actually taking away an important message: Sexual consent isn't about a blanket "yes" or "no" 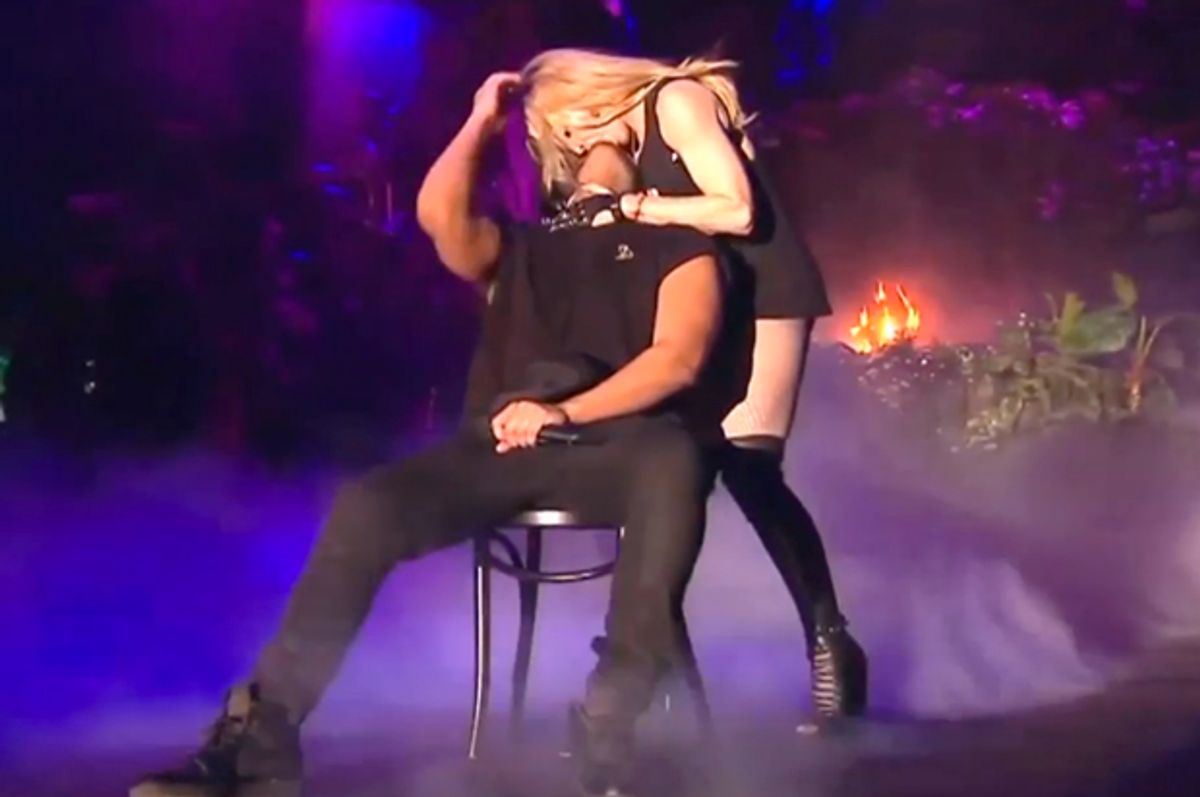 Madonna and Drake perform at the Coachella Music Festival
--

So, Madonna kissed Drake on the mouth during a Coachella performance on Sunday night, and one of the Internet's first instincts was to offer up a resounding "ew, gross." Some of this is based solely on the rapper's expression. Footage of the smooch, which quickly went viral, begins with some seemingly mutual swapping of spit before showing a clearly displeased Drake breaking from Madge's embrace, wiping his mouth with his hand. Listening closely, he can be heard saying, "Oh shit, what the fuck just happened?"

Which would imply, then, that "what the fuck just happened" was a sexual act to which one participant did not fully consent. People seem to be picking up on this, whether by acknowledging Drake's clear discomfort at the end of the kiss (few reports leave out how "awkward" or "sloppy" the gesture was), or by making lewd comments about Madonna's age. The latter "analysis" misses the point: What might be "gross" about the incident isn't the fact that a 56-year-old woman publicly displayed her sexuality and kissed a 28-year-old man. Rather, it's that she seems to have done so without his complete, enthusiastic consent.

While a kiss might have been something Drake agreed to, it certainly doesn't appear he agreed to that kiss -- and that gives us a clear example of the "grey area" so often discussed with regard to sexual consent, which in this case and so many others really isn't so grey at all.

There are readable and reasonable indicators that Drake willingly engaged in a kiss with Madonna, in addition to the fact that this happened in the context of a performance, and the stars likely reached some sort of choreographed agreement ahead of time. In the video, Drake can be seen reaching up to put his hand on Madonna's head, and we see him kiss her back. But then we see her push his hand off, his posture start to change as he moves down in his seat, his attempt to pull his face away and then his disdain. We see a shift happen, and it's hard to miss.

It's an example that helps illustrate what makes public conversations about consent, and debate about affirmative consent in particular, so perplexing. Preemptive concerns about men who might be wrongly accused of sexual assault under affirmative consent laws, for example, tend to hinge on the idea that consent is some sort of hairy, confusing trap that could result in a dangerous misunderstanding at any moment. But, as my colleague Katie McDonough has argued more than once, misunderstandings are more easily avoided with basic conversations about sex, respect and bodily autonomy, and by understanding that, while consent might be dynamic, it is not so difficult to grasp.

In fact, it can be as simple as what seems to have happened with Drake and Madonna: There might have been a "yes," but it doesn't seem the boundaries of that "yes" were clear. And that's one key way boundaries get crossed. Consent for one act is not consent for all its iterations or for all similar acts, though it's possible to secure affirmation through open communication and paying attention. It can really be that easy -- and it can help countless people avoid wondering what the fuck just happened to them, whether they're on stage or in their bedrooms.