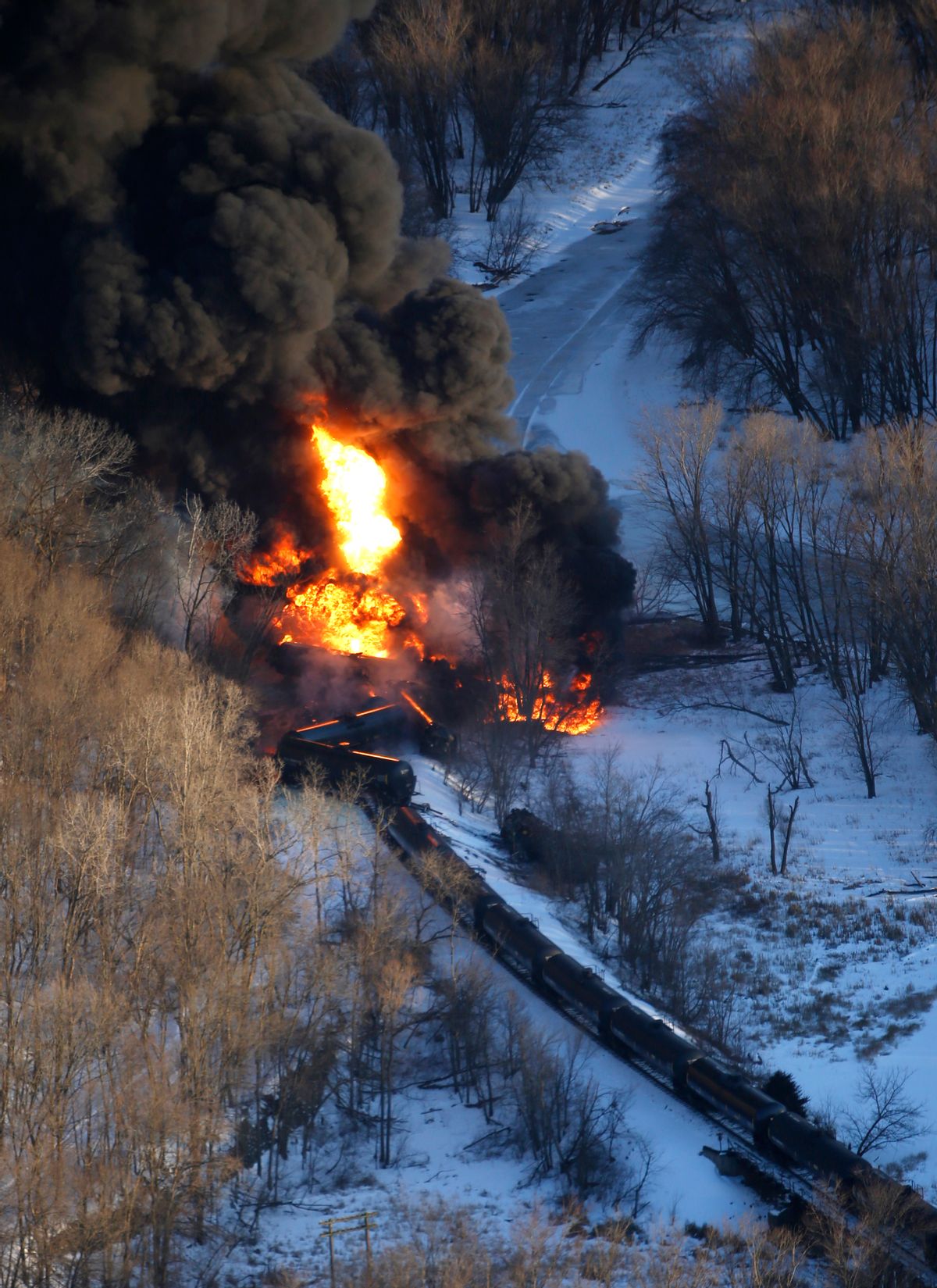 In just a three week period earlier this year, three oil trains careened off the tracks and burst into flames, burning for days in West Virginia, rural Illinois and Ontario. They caused no deaths and few injuries, but the West Virginia explosion occurred near enough to a town that one home was destroyed and hundreds were forced to evacuate; they were best characterized, perhaps, as disruptions.

The same situation in Jersey City, federal officials say, could be an unprecedented disaster.

The Federal Emergency Management Agency has begun to take on the task of sketching out scenarios for oil train derailments in densely populated urban areas, the Wall Street Journal reports. Last month, this took the form of an exercise involving New Jersey firefighters and emergency workers. The scenario: a mile-long train derails on the elevated track that traverses Jersey City, just two miles from the Holland Tunnel. There's an explosion, a 300-foot fireball, and a plume of black smoke that spreads all the way to Westchester. Eighty-seven people are killed instantly, and 500 more are injured.

“The derailment scenario FEMA developed is a very real possibility and a very real concern,” Susan Lagana, a spokeswoman for the U.S. Department of Transportation, told the WSJ -- some 20 oil trains pass through the city every week.

“It would be a catastrophic situation for any urban area," said Jersey City’s mayor, Steven Fulop, "and Jersey City is one of the most densely populated areas in the entire country."

Oil train traffic across North America by rail has skyrocketed 4,000 percent over the past five years; the amount of oil they carry -- much of it the particularly explosive crude from North Dakota's Bakken shale -- has increased from 20 million barrels in 2010 to nearly 374 million last year. With that has come an major uptick in derailments, the most notorious being the train that plowed straight into a Quebec town in July 2013, killing 47 people.

U.S. cities with heavy train traffic are increasingly on the alert: concerns about lax safety regulations, and about federal laws that protect shipping companies from having to release informaion about when trains are passing through and what they're carrying in the interest of security, have been raised everywhere from D.C. and Virginia to Seattle, Washington. FEMA officials told the Wall Street Journal that a second planning exercise is scheduled for suburban Wisconsin, where anxieties surrounding the increase in rail shipments are high.

In the meantime, regulations that would prevent these potential disasters before they happen are proving harder to come by. Last July, the Department of Transportation proposed new safety rules that would remove the rail cars most vulnerable to puncture and explosion from the tracks, but the supposedly newer, safer model is the one that burst into flames in West Virginia. The regulations have yet to be finalized, but already some in the industry are arguing that they are going to need longer than the allotted two years to phase out their old cars. In the meantime, rail CEOs aren't interested in slowing down train speeds.

A spokesman for the Association of American Railroads told the WSJ they recognize that “more has to be done to further advance the safe movement of this product."