It "won't go unnoticed": What the Clinton camp's de Blasio dust-up says about the thinness of the Democratic field 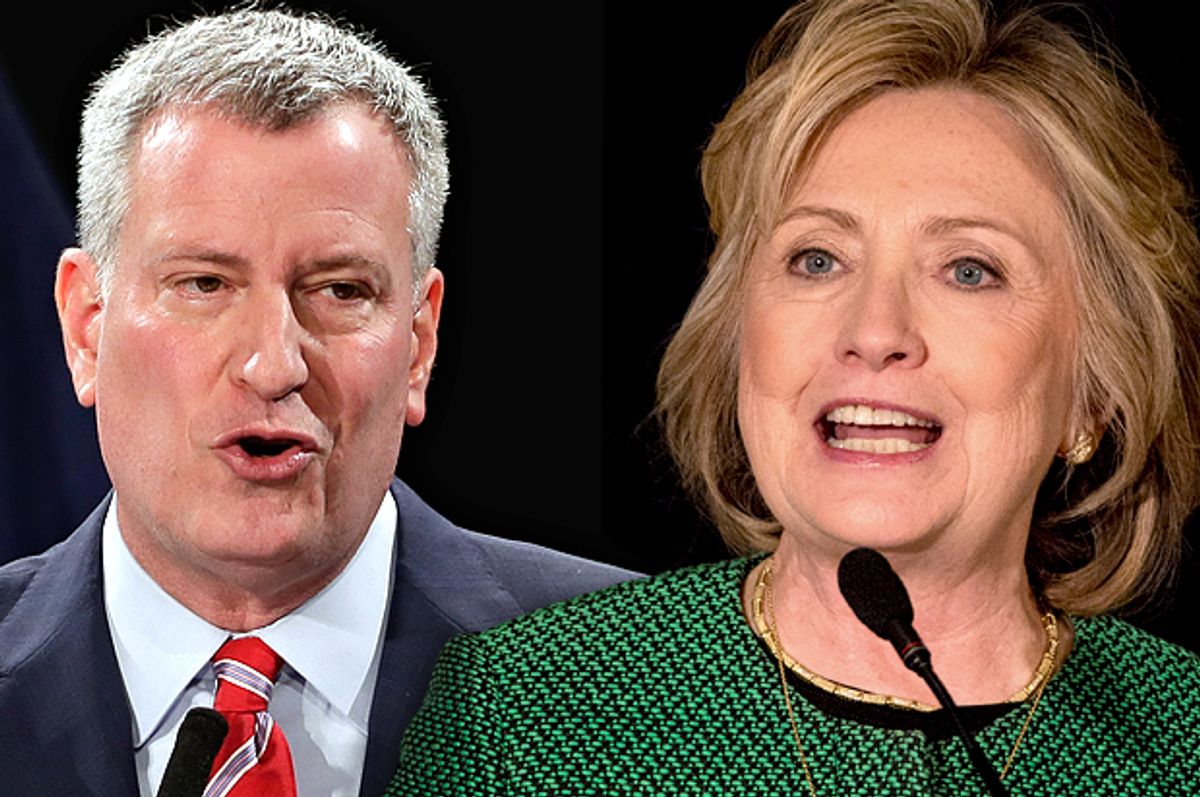 The tone that the early Clinton campaign would like to project, as long as it can get away with it, is one of grace, humility and evitability. That we have a candidate with a 50-point lead in most polls who still takes nothing for granted. She is currently riding in some sort of van-like motor vehicle en route to Iowa, where she will chat with small groups of average podunk "everyday" Iowans. You know, diners and small towns. Iowans will have conversations with Hillary Clinton about paychecks and so forth. It is Clinton's intention to earn each and every everyday Iowan's vote by pounding the pavement, hearing out their everyday concerns, and devising the policies through which she might remedy them.

All votes must be earned. Yes. The Clinton campaign's public posture is that it knows it can't rely on, would be gauche to rely on, the aura of inevitability to take her to the nomination. It's perfectly reasonable -- the patriotic duty, in fact -- for voters and caucus-goers to expect to hear a candidate's platform before committing to them their political support.

New York City Mayor Bill de Blasio is taking the Clinton campaign at its word. De Blasio is friendly with the Clintons, having managed Hillary Clinton's 2000 Senate campaign. But he's also one of the more prominent elected representatives of the progressive wing of the Democratic Party, and it wouldn't be a good look to just sign up with her before hearing a single policy position. And so he declined to endorse her on Sunday's "Meet the Press," while still offering her high praise as a public servant.

"Like a lot of people in this country, I want to see a vision," Mr. de Blasio told Chuck Todd, the show’s host, who had asked the mayor if he would "unequivocally" endorse Mrs. Clinton or wait to see if she adopted more liberal positions akin to his own.

"I think she’s one of the most qualified people to ever run for this office and, by the way, thoroughly vetted," Mr. de Blasio added. "But we need to see the substance."

Sounds fair. More than fair! Really, that's about as deferential as someone can be while still retaining a modicum of dignity. If Clinton's comms people were to respond on the record, they'd say something like, "That's great! Everyone should have time to consider whether they support us! We don't expect anything!"

Behind the scenes, though, Clinton people may well have already fashioned a dart board out of de Blasio's face. The New York Times writes that de Blasio's effusive non-endorsement caused "consternation among some of Mrs. Clinton’s supporters."

One of those would be Hilary Rosen, a sometimes Democratic strategist, sometimes lobbyist, sometimes activist, sometimes consultant for the world's most reviled brands. Rosen was a staunch supporter of the Clinton campaign in 2008, frequently serving as a cable news surrogate. Her support for Clinton has not ebbed, and she let slip into the public the frustration that some in "Clintonland" must have felt after de Blasio's appearance.

It's going to be a big challenge for the Clinton campaign to get all of its surrogates -- meaning, most of the Democratic establishment -- to NOT GO ON TWITTER AND TWEET STUFF LIKE THIS. It doesn't seem like it would be hard to avoid tweeting what could be interpreted as threats to prominent Democratic politicians who make banal statements on "Meet the Press," but here we are.

Rosen may have been freelancing, but she's probably not wrong. This will not go unnoticed. The next time de Blasio is in some sort of pickle where he could use a statement of support, or needs to raise money, the Clintons may not be available to answer the phone.

This episode explains a lot about why the Democratic field looks the way it does right now. If you've got something to lose -- if you hope to move higher in Democratic politics -- you're not going to run against Hillary Clinton.

Some pundits think that Clinton might like a sparring partner in the primary, to help knock some of the rust off, get her in fighting shape for the general election, or whatever dumb metaphor you'd like to use. My guess is that Clinton does not want this at all! She'd much rather enjoy just running unopposed. Wouldn't you? Wouldn't it be more fun to run unopposed than to have any opponent, in a race for a presidential nomination?

Any Democrat who runs against Hillary Clinton will almost certainly lose. Even Elizabeth Warren. And after they lose, they'll stay on the Clintons' shit list permanently anyway. (I should clarify that this is not unique to the Clintons. Most effective politicians have long memories.) So the best gauge for whether a Democrat will run is if they have anything to lose. Bernie Sanders has nothing to lose, so that's why he's still considering a bid. Same with Jim Webb, Lincoln Chafee and maybe Joe Biden. None of these figures have any desire or interest to serve in the next Democratic administration.

Martin O'Malley is an interesting study, however. He does indeed have something to lose. That Education Department has his name written all over it! If he runs, he'd better hope he gets enough support that Clinton is forced to offer him a position. In order to get that support, though, he'd probably have to go pretty hard against Clinton. And that wouldn't go unnoticed. Because it would be in public, obviously.