Marco Rubio will be a big test for Republicans who think the same old GOP policies just need a fresh, new spokesman 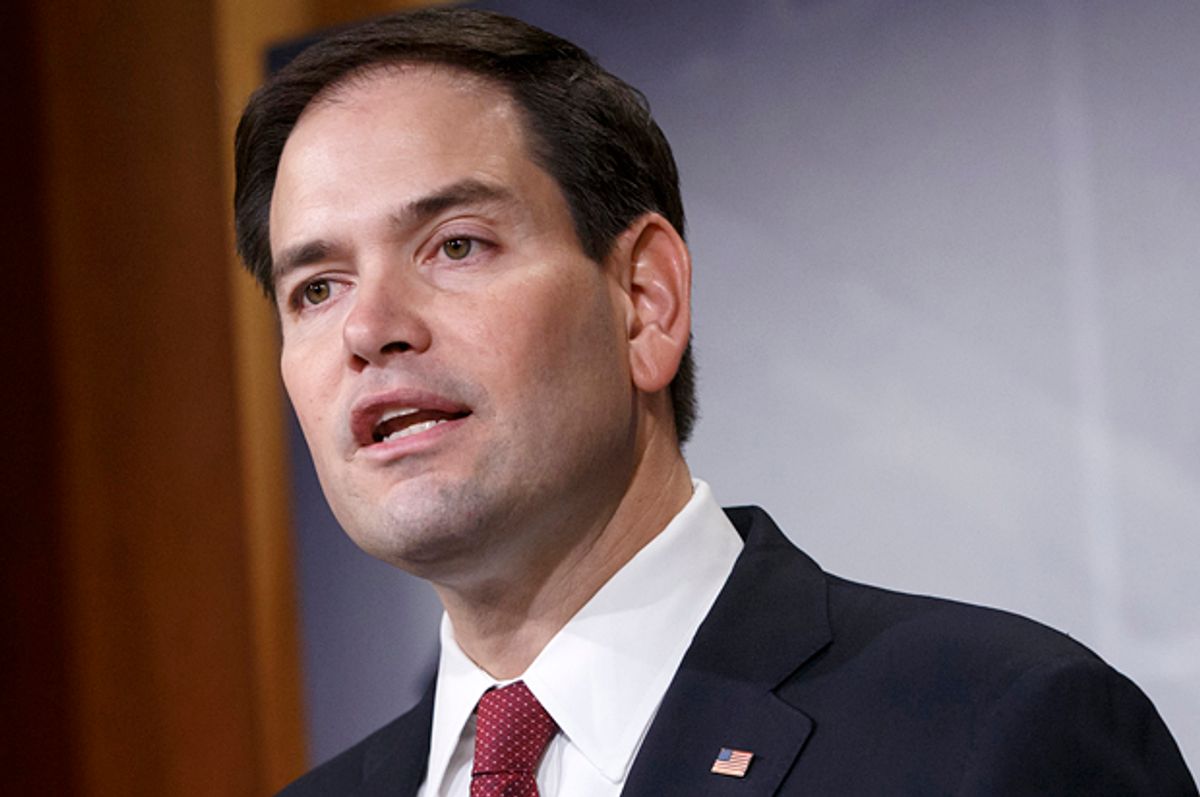 At this moment, Rubio’s chances at the nomination don’t look great – he’s polling in the mid-single-digits, coming in behind serious contenders (like Jeb Bush and Scott Walker) and less-serious ones (Mike Huckabee and Ben Carson). Jeb has been busily snatching up money and establishment support in Florida, and it’s not immediately clear where Rubio fits in a broader 2016 field. But reporters and pundits are still bullish on Rubio’s prospects, largely because he’s “different” from your average Republican.

“Rubio is nothing if not unique in today's GOP,” writes Aaron Blake at the Washington Post. “He's young (43 years old) in an increasingly old party, he's Hispanic in a party that is hemorrhaging Latino votes, he's a very good communicator in a party that struggled to find one in 2012, and he has ties to both the tea party and the party establishment in a party that is very much split between the two.” Jennifer Rubin, in a blazing hot take, wonders if Rubio isn’t just like the nice young man who won the Masters. “Whether it is the Masters or the Apple Watch, Americans like what is new, fresh and fun,” she writes. “They want to be excited by someone who seems deserving of good fortune. They like to root for the nice guy.”

The picture that emerges from takes like these is that Rubio’s strength lies in his marketability: He’s young! He’s not white! He talks real purty! And that’s important because when you strip all those less tangible qualities away, you’re left with what basically amounts to an old-school Republican policy platform.

Mitt Romney’s 2012 loss launched the GOP into an internal debate over how to boost the party’s electoral appeal in presidential years. The party establishment, represented by the Republican National Committee, felt that a party “rebrand” was in order, and put together a frank document describing the party’s troubles in appealing to voter demographics outside its base of white, male conservatives. Most of the document dealt with outreach and communications, but it did recommend that the party get on board with comprehensive immigration reform. At the same time, a group of reform-minded conservatives began the thankless work of trying to revamp the party’s rickety policy platform so that it’s rooted in something other than Art Laffer’s fantasies. Talk radio and the Tea Party, meanwhile, insist that nothing needs to be changed, and that the White House can be won by calling Obama a socialist.

For a while, it seemed like Rubio would try to bridge the divide between the establishment and the reform conservatives: He famously backed comprehensive immigration reform, and he was generally supportive of the reform conservatives’ economic agenda of focusing on the middle class. But pressures from the right have forced him back toward a policy agenda that’s more in keeping with the party’s long-standing dogma. He “repented” on immigration and abandoned comprehensive reform in favor of an “incremental” approach that prioritizes border security above all else, which is largely in line with what most other 2016 candidates support. On taxes and the economy, though, he’s being downright disingenuous.

As Brian Beutler lays out, on taxes Rubio is basically trying to pull a big con in marrying the nice-sounding parts of reform conservatism (expanded tax credits for the middle class) with the same tax policies that Republicans have been pushing for over 30 years (deep “pro-growth” tax cuts that benefit the wealthy). The result is a tax plan that blows a giant hole in the budget, even when you massage it with a little dynamic scoring. And even though Rubio’s plan is insanely generous to high earners, hardcore supply siders are still upset that he wastes money on a tax credit for middle-class families instead of reducing the top marginal rate more. Rubio’s demonstrated an eagerness to placate the right, so it’s not a stretch to think he’ll end up just dropping reform conservatism like a hot rock and chasing the stale GOP dream of balancing the budget while eviscerating tax revenues.

As for Rubio’s other policy preferences, he’s largely indistinguishable from the rest of his party. He wants to repeal and replace Obamacare and replace it with free-market pixie dust. He supports hard-line postures toward Iran, wants to deepen U.S. military involvement in the Middle East, and favors maintaining our Cold War-era Cuba policies. He wants to balloon the defense budget and he doesn’t really worry about how to pay for those additional outlays. Gay marriage? He’s against it. Climate change? He doesn’t believe it’s real.

And yet, Rubio’s marketing himself as something new, fresh and different. “Just yesterday,” he said in his announcement speech, “a leader from yesterday began a campaign for president by promising to take us back to yesterday.” Marco Rubio’s candidacy will be a big test of whether slick marketing can overcome the waning popularity of the Republican playbook.