Leave Madonna's age out of it: Nobody gets a free pass to grope at will 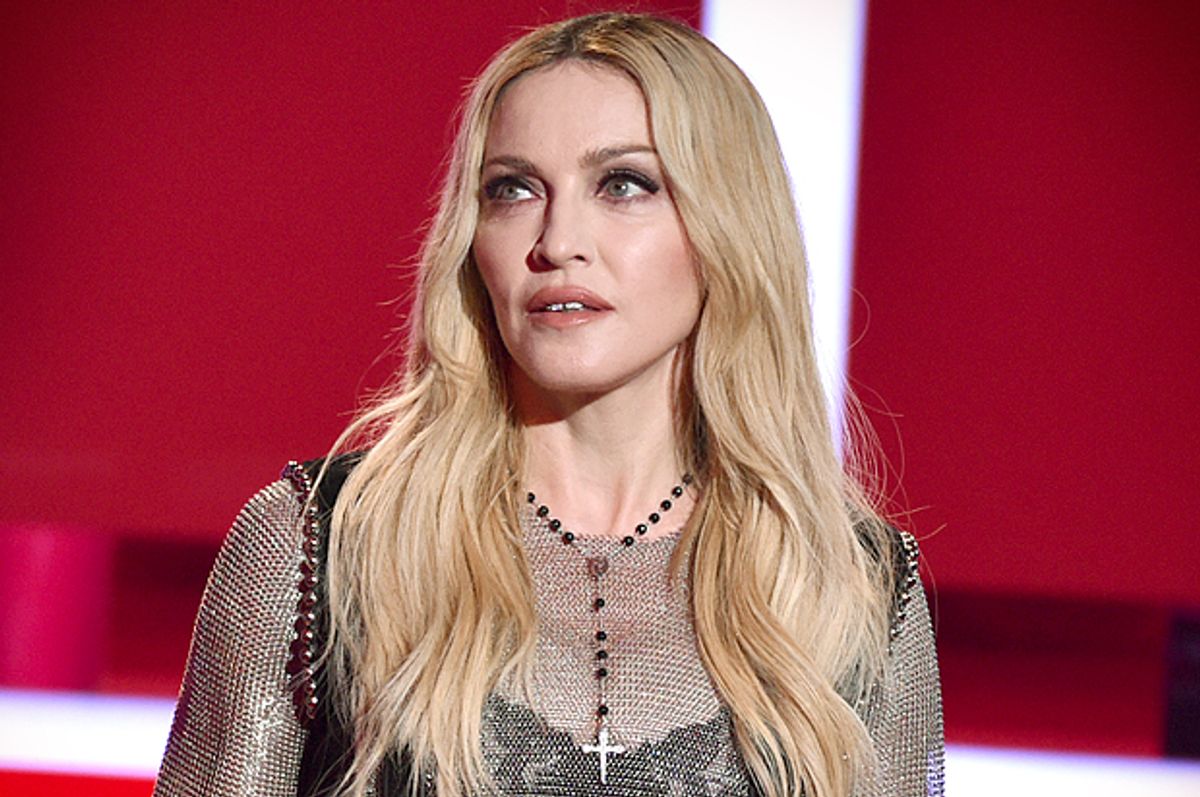 It’s the year 2015 and I’d like us to get one thing straight: Consent.

Consent about people’s bodies and the boundaries around their bodies, especially (but not only) when we’re talking about sex.

It’s something that hasn’t been respected for most of our history. A lot of us have grown up in cultures where we were taught that consent was implied, or optional, something to be coaxed or nudged or pressured into.

And sometimes that works out. Some people think it’s more fun that way, because they think two partners ought to be able to read unspoken, non-verbal cues without having to resort to verbal ones.

For other people, it doesn’t work out. For quite a lot of people, a lack of verbal consent means they actually don’t want what’s going to happen. And having stuff done to your body that you don’t want is the definition of violation, of dehumanization, of being treated as a thing rather than a person.

Let’s be clear about this. Rape--using someone’s body for your own pleasure against their will--is the second worst thing you can do to someone, just above murder. Even if you really believe that playing games with “blurred lines” of consent is sexy and fun and that the passion and romance will go out of sex if those games end--which isn’t true--there is no pleasure in the world that’s worth the pain caused by inflicting rape on someone.

But let’s be clear about some other things.

This is a universal rule. It’s a basic rule of what human beings don’t do to other human beings.

It doesn’t apply to some people and not others. It doesn’t apply when you think you’re making some broader point about culture or when you concoct some explanation for why it’s “punching up.”

Rape is a gendered crime because by far it is most common as a crime committed by men against women. That doesn’t mean that rape of women by women, of men by women or of men by men doesn’t happen, much less that it’s okay.

It’s not okay that men are raped by other men in prison, for instance. There’s no such thing as “deserving” to be raped, there is no sense in which prison rape constitutes “justice” and we need to stop fucking joking about it.

But it’s also not okay when women rape men, which 46 percent of men who report being raped report happened to them. And yes, in the abstract you can make as a culture we value male and female sexuality differently, that one act “means” something different than another when evaluated by cultural critics, etc., etc.

You know what? A crime still occurred. And telling the victim of a crime that the mechanics of sex or the relative “sexual market value” of their attacker means that on some level they “must have enjoyed it” remains one of the scummiest things you can do.

Let’s get more specific here. You can’t say a male teacher sleeping with an underage female student is rape but not levy the same condemnation on the same situation with the genders reversed. You can’t excuse Mary Kay LeTourneau’s rape of a 12-year-old boy because they ended up getting married, any more than we should excuse the many countries where it’s normal for women to marry their male rapists.

And if you actually nonconsensually “surprise” someone on stage with a kiss? That’s super gross, regardless of who’s doing it to whom. Even if they, personally, aren’t that shaken up by it and act cool about it afterwards. It’s not an okay thing to do.

And it doesn’t matter if it’s making a point about ageism in Hollywood directed against women. Yes, I completely acknowledge that a ton of the criticism directed at Madonna for kissing Drake was mean, ugly jokes about her age. That doesn’t make it okay.

Indeed, the way those criticisms miss the point demonstrate why that surprise kiss wasn’t okay. The implication that if Madonna had been younger and hotter and someone Drake’s “type” then he couldn’t possibly object to being surprise-kissed by her? That’s the problem.

The fact that Drake had to tell everyone that he was okay with being surprise-kissed because otherwise it’d be insulting Madonna--and all women her age--as “gross”? That’s the problem.

The fact that Madonna thinks the way to prove that women her age can be hot and desirable is to grab a younger guy and kiss him without his permission and have him be cool with it? And that lots of people, including feminists I respect, totally buy that line of reasoning? That’s the problem.

The problem is there’s people still going on about how surprise kisses are no big deal--pointing out “surprise” kisses from classic movies and plays. The problem is we don’t recognize that even comparatively “innocent” acts like an unwanted kiss, unwanted hug, unwanted grab can lead to violation and hurt.

Can we please treat consent as the simple absolute it is? Is it that hard to make it a rule that we don’t do anything to someone else’s body unless you know they want you to do it?

I don’t say this to diminish concern over how it’s women who are primarily, overwhelmingly the victims of rape. I say this because rape culture is gendered, and the idea that men can’t be raped or violated or assaulted or harassed plays directly into it.

It’s why MRAs talk a big game about empathy for male rape victims when it’s time to derail conversations about women but as soon as that task is done go right back to mocking the idea of men being raped as much as your garden-variety sexist jerk does.

Under such a model, men pushing as hard as they can and “blurring lines” in order to win said game is understandable and laudable. Under such a model, the idea that a man could ever not  desire a woman is impossible; claiming such is an ultimate insult toward the woman’s femininity and attractiveness.

This model of the world is rape culture. It’s the model that leads to some men getting away with being serial rapists by normalizing “rape-adjacent sex,” where consensual sex ends up looking like rape and camouflaging rape because men are “supposed” to pursue and women are “supposed” to retreat.

It’s a model that defines sex as a man always taking something from a woman--erasing the real-life complexity of desire, the fact that what people want is immensely complicated regardless of the gender society assigns them, and that sex isn’t about “taking” anything but about two people agreeing to do something together.

Every time you do that, you feed rape culture. You hurt a lot of men, and you make it a lot easier for men to hurt women.