Take that, Ted Cruz: Jeb Bush heads to Liberty University to pander to the Christian right

The "moderate" Bush will contest the evangelical vote because next to big donors, they’re his most loyal base 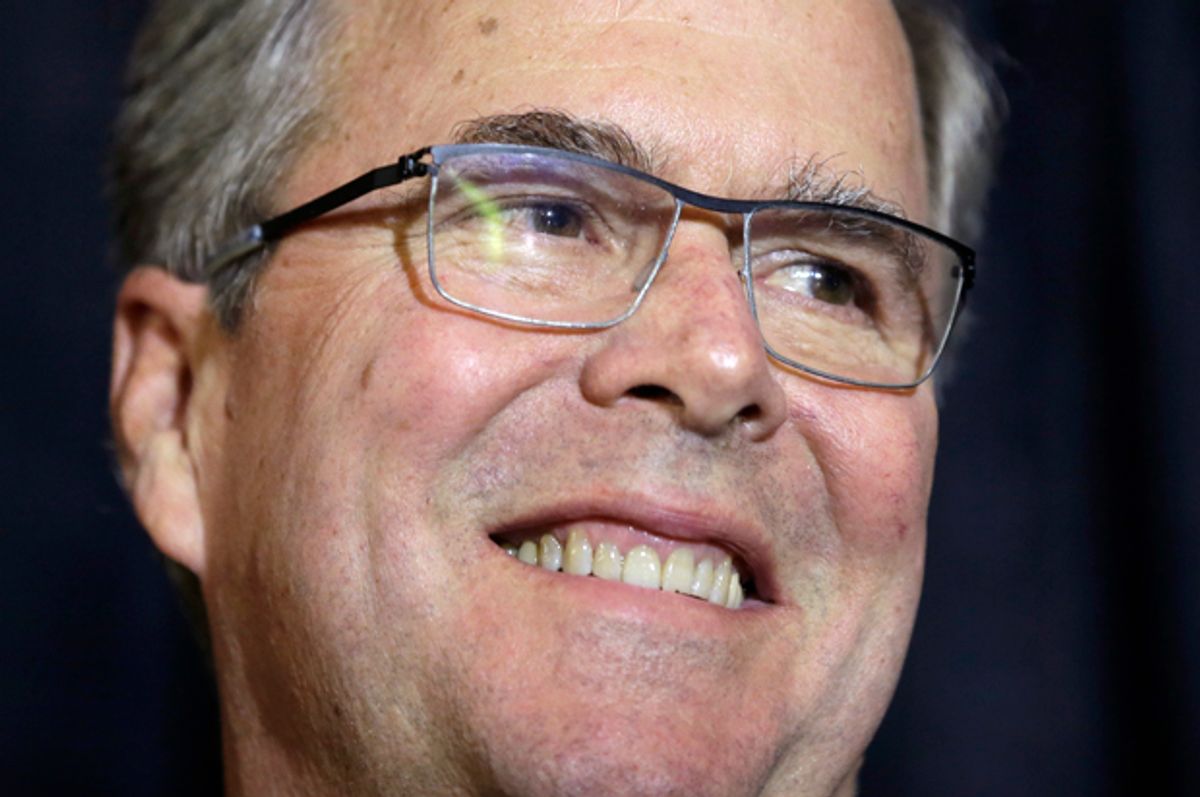 Jeb Bush famously told us that to win the White House, a Republican presidential candidate had to be willing to “lose the primary to win the general, without violating your principles.” It was widely interpreted as evidence that if Bush ran, he’d do it as a more centrist, reasonable candidate who’d be, in his own words, “much more uplifting, much more positive,” and willing to stand up to fire-and-brimstone party hardliners.

Now comes the news that Bush will give the commencement address May 9 at Jerry Falwell’s Liberty University, where Sen. Ted Cruz announced his own presidential campaign. It’s just more evidence that Bush is not really a moderate or a maverick -- especially when it comes to the issues that matter most to the Christian right – he just fools Beltway reporters into covering him that way.

Let’s also face that Liberty University has become a mainstream institution within the official Republican Party, despite Falwell’s lifelong crusade to harmonize church and state and to smite sinners (the way God punished the nation for tolerating feminists and gays with the 9/11 attack.) The last two GOP nominees gave commencement speeches at Liberty – Sen. John McCain in 2008 and Mitt Romney in 2012. President George H.W. Bush did the same in 1991. But it didn’t appear to help any of the three shore up their weak evangelical Christian base.

Romney did particularly poorly with the Christian right: In 2012 exit polls analyzed by FiveThirtyEight, his performance with evangelicals lagged behind his overall numbers with Republicans. That softness persisted into this cycle: In a December ABC News/Washington Post survey, Romney had support from 20 percent of Republican primary voters but only 13 percent among evangelical Christians.

But while Bush is promoted as the more “moderate” figure in the race, in the mold of Romney, he’s got much better numbers with evangelicals than the 2012 nominee because he’s courted them more avidly -- for his father, his brother and during his own career as Florida governor. In that same December ABC News/Washington Post poll, Bush ran behind Romney with overall GOP voters, with 15 percent to Romney’s 20. But he beat him among evangelicals, taking 20 percent to Romney’s 13. (Romney, of course, later pulled out of 2016 speculation.)

It’s the tea party that represents Bush’s base weakness due to his support for Common Core, his not-unkind rhetoric on immigration and his refusal to sign Grover Norquist’s no-taxes pledge. From abortion to gay rights to his fanatical over-reach in the case of Terri Schiavo, though, Bush has made the Christian right happy at every turn.

On the only big social issues test of the fledgling 2016 campaign, the Indiana “religious liberty” law, remember that Bush defended Gov. Mike Pence harder than Pence himself. He softened his tone a little when confronted by the only voters who matter more than the Christian right: rich people. But if we’re going to see Bush chart a surprising, risky course to “lose the primary but win the general,” it’s not going to come at the expense of evangelicals.

So the Liberty news shouldn’t be a big surprise. Bush cheerleader Jennifer Rubin depicted it as a blow to Sen. Rand Paul:

Maybe it is. But Liberty will probably find a place in the lineup for a Paul speech too – they enjoy seeming like kingmakers -- and he’ll no doubt want one. None of these guys is willing to take any political risk to act on their supposed goal of widening the GOP’s appeal.