America's over-criminalization epidemic: How the prosecution of Atlanta teachers exposes a broken system

The threat of over-criminalization is a nationwide problem with no easy fix, law professor Angela Davis tells Salon 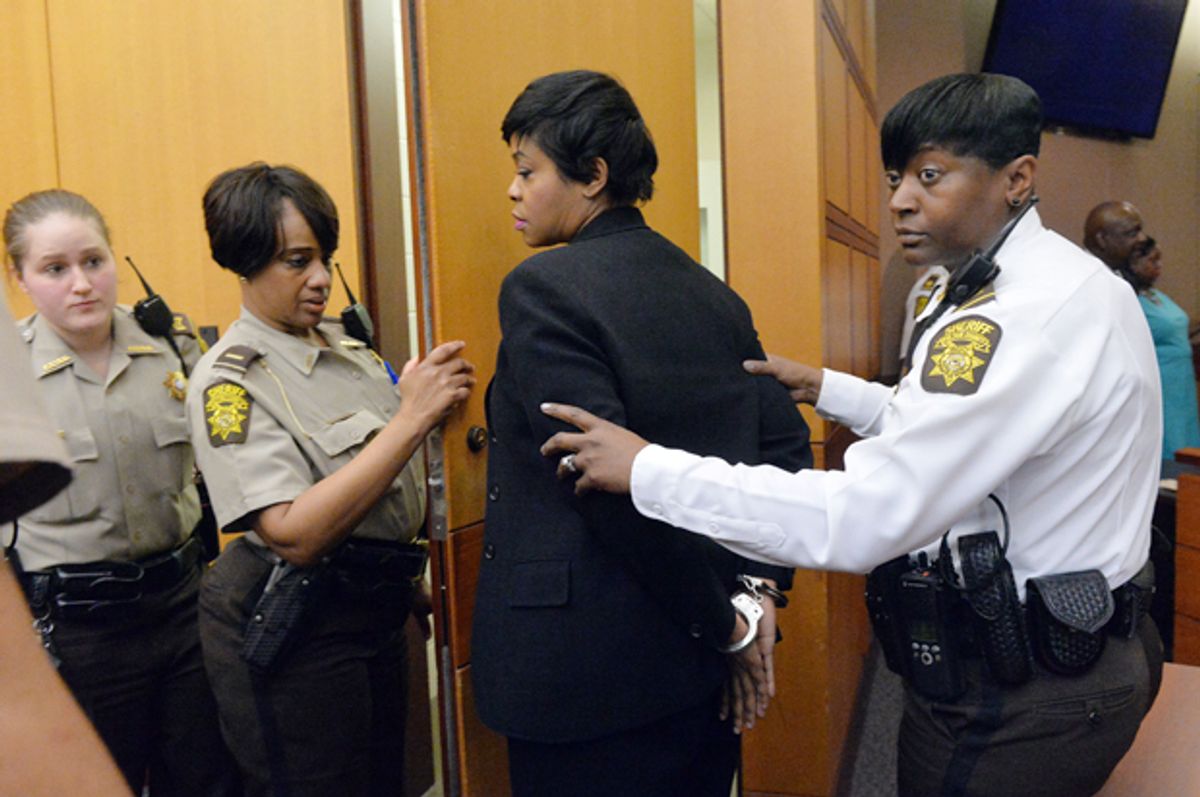 At times, the task of reforming and reimagining the U.S. criminal justice system can feel a bit like peeling an onion.

Whether it's drug laws, mandatory minimums, the disenfranchisement of former felons, the widespread scourge of overcrowding, the death penalty or the continuing use of the abhorrent form of torture called solitary confinement, the number of serious problems can be overwhelming. Just when you think you've got a handle on one of the broken system's maladies, layer after layer after layer of intractable policy failures can be found underneath. And as we saw this week when a group of former Atlanta public school educators were sentenced to seven years in prison for standardized test cheating, it's necessary to throw over-criminalization into the mix.

Recently, Salon conducted an interview via email with Angela Davis, a professor at American University's Washington College of Law, on the problem of over-criminalization. Our correspondence touched on the meaning of the term, its origins, its consequences and how the problem could be addressed. Our back-and-forth has been edited for clarity and length, and can be found below.

What do we mean when we talk about “over-criminalization”?

In the United States, we look to the criminal justice system to resolve far too many wrongs, grievances and disputes. Every harm or injustice should not be labelled a crime warranting a criminal conviction (with all of its devastating consequences) and incarceration. There are many ways to resolved injustices and hold people accountable – even punish them – without turning to the criminal justice system. Yet in this country, we criminalize so many behaviors that need not be crimes, thereby granting extraordinary discretion to prosecutors and leading to costly mass incarceration that is often overly punitive. The criminal justice system is rife with unwarranted racial disparities, and the United States has the highest incarceration rate in the Western world – in part because of the phenomenon of over-criminalization.

When did the phenomenon begin? Is it getting better, worse or staying the same?

It is difficult to pinpoint when the phenomenon began, especially when one considers that each of the 50 states has its own penal code in addition to the federal criminal laws. The number of federal criminal laws has steadily increased since the early 1900s with a particularly sharp spike in the last few decades. Over 400 new federal criminal offenses were enacted between 2008 and 2013. The Judiciary Committee of the House of Representatives created a bipartisan task force in 2013 to study the issue, but in the meantime, the existing laws provide prosecutors with all the tools they need to charge individuals with an extraordinary number of criminal offenses that sometimes carry draconian penalties.

Would you consider the ongoing events in Atlanta, with the 11 educators charged of racketeering, an example of over-criminalization?

The Atlanta case is a stark example of how over-criminalization can lead to the abuse of prosecutorial power and discretion. I am quite certain that when the Georgia Legislature passed its racketeering law, it did not have teachers who cheat on exams in mind. These laws are traditionally used to charge and punish individuals involved in organized crime, high-level drug dealing, and similar offenses. The maximum penalty is 20 years in prison. Yet this prosecutor was able to use this law to charge 35 teachers and administrators with racketeering. Most of them pled guilty to lesser offenses and 12 went to trial. The 11 who were convicted may now spend decades in prison – all for being involved in a cheating scandal.

Of course what they did was wrong, but this is a prime example of a prosecutor using the criminal justice system to charge and seek the incarceration of individuals who could have been punished severely some other way. Firing them and taking their pensions would have been enough to destroy their lives, but apparently that wasn’t enough for this prosecutor. At a time when most criminal justice officials in this country recognize that we have a problem with over-incarceration – the United States has 5 percent of the world’s population and 25 percent of the world’s prison population – this prosecutor chose to charge 35 teachers with no criminal record who committed totally non-violent offenses with racketeering. It’s totally unfathomable and an incredible abuse of prosecutorial discretion and power.

When such strikingly harsh penalties come about, is it due primarily to decisions made by prosecutors, plaintiffs, judges or juries?

But the bottom line is that the prosecutor doesn’t have to take any of these factors into account and is free to charge as he or she sees fit.  The prosecutor also totally controls plea bargaining. Over 95 percent of all criminal cases are resolved by way of a guilty plea, and whether a defendant is allowed to plead guilty to a lesser offense in exchange for giving up his right to trial is solely up to the prosecutor. So between the charging and plea bargaining decisions, the prosecutor almost controls the criminal justice system. It is an incredible amount of power with very little transparency and accountability.

What are the first steps or immediate concerns that reformers should be taking or addressing?

Reformers need to lobby the legislatures to decriminalize many of these acts and to drastically reduce the penalties for others. This work is being done around the country in a number of states, and some states have taken steps to reduce their prison populations. The good news is that there is pretty significant bipartisan support for reforming our criminal laws, policies and practices – in Congress and in the states. Organizations as far apart as the Heritage Foundation and the National Association of Criminal Defense Lawyers are lobbying for reform.

Is this a problem that will be solved more through changing how our culture views punishment? Or are there straightforward administrative fixes that would make a difference and require of reformers a less ambitious agenda?

I’m not so sure the general public is as punitive as we would think. Politicians usually run on “tough on crime” platforms, but what if they didn’t? I’m not so sure that the public wouldn’t be receptive to reducing the prison population, especially since so many Americans have family members who have been unfairly incarcerated or otherwise negatively affected by the criminal justice system.

It takes time for laws to be changed, but prosecutors could have a drastic impact on this problem immediately, simply by choosing to exercise their discretion more wisely. Prosecutors should focus on violent, dangerous offenders and stop wasting the taxpayers’ money going after low level drug offenders, schoolteachers who cheat on exams and other nonviolent offenders. Because almost all state and local prosecutors are elected officials, members of the community should push their local prosecutors to make wise prosecutorial decisions, and when they don’t – they should vote them out of office.