Fear of a female president: How Hillary's ambitions -- and defeats -- have shaped TV's political women 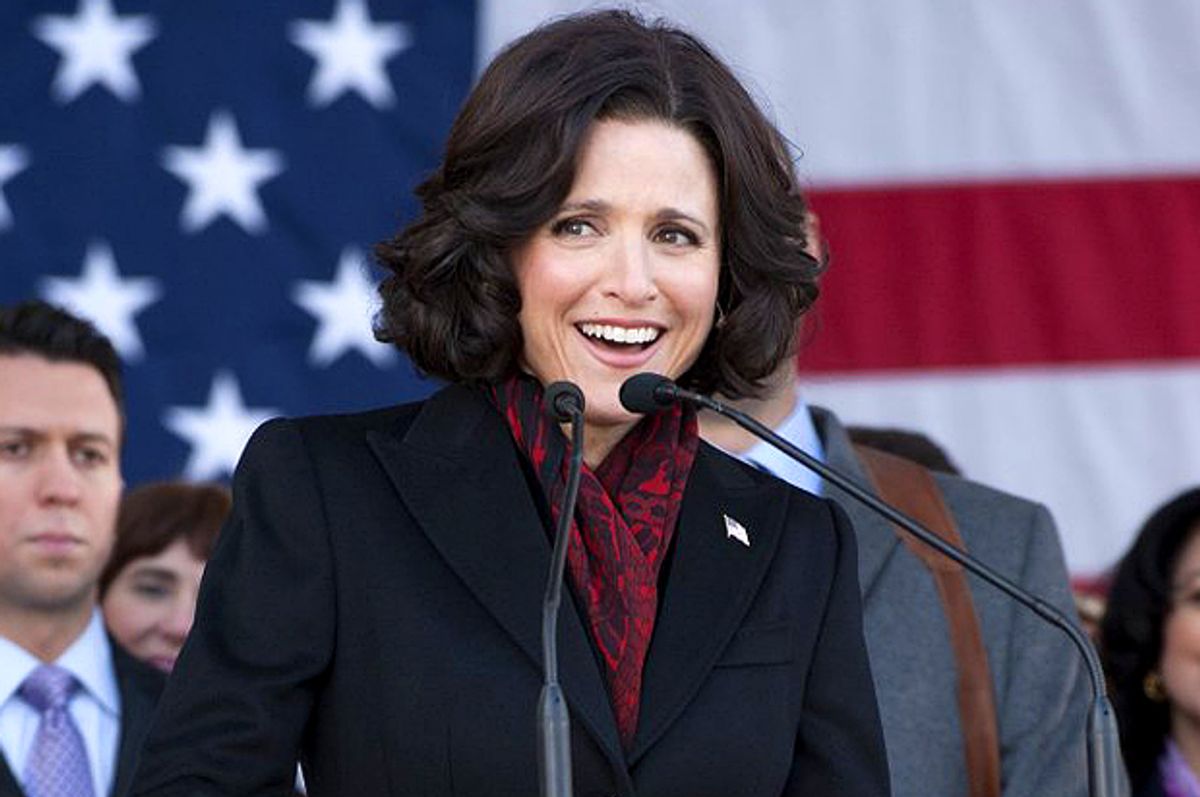 We have been preparing for Hillary Clinton’s presidency for years.

As Rebecca Traister wrote in the New Republic this weekend, Clinton has “loomed so powerfully in the American consciousness” that “there has not been a minute of the past eight years when we have not been assured (or threatened) that Hillary Clinton’s candidacy, her presidency even, is an inevitability.”

Traister is primarily a writer who focuses on politics, so I believe her to be speaking of the highly charged political dialogue around Hillary Clinton, one that ropes in the fraught administration of her husband, the long battle for the 2008 Democratic nomination, Clinton’s record as secretary of state in the Obama administration, and the politics and campaigning of the politician herself, as she has spent the last several decades of her life in the public eye.

But Traister’s words resonated with me for a different reason. Hillary Clinton’s ascension may yet be theoretical, in this universe, as her campaign, between 2008 and this past weekend, lay dormant. But on television, her proxies have been pounding the pavement; in the alternate realities offered up in pop culture, the Hillary Clinton presidency has lived its triumphs and its pitfalls already. It was no surprise whatsoever to learn that Clinton is a fan of the Danish series “Borgen" (2010) a drama about Denmark’s (fictional) first female prime minister, played by Sidse Babett Knudsen. It’s a rough draft of the finished product she hopes to accomplish.

I don’t just mean the vision of a woman head of state, though that is a milestone that has captured the imagination of pop culture for years. Over the years, there has been no shortage of speculation as to what a female commander-in-chief would be like—what her campaign would be like, what her election would require, what her personality would have to be, what the job would require of her, and, indeed, no small amount of attention paid to what role the president’s husband would play in her administration. We have awaited a female president for so long that film and TV writers have repeatedly taken it upon themselves to produce the woman herself—whether that’s Natalie Portman at the end of “Mars Attacks!” (2000) or Patty Duke in the 1985 sitcom “Hail to the Chief.”

But the way that this unknown first female president has been talked about has changed from talking about a woman, in the abstract, to this 2016 front-runner, in the almost brutally particular. And this is happening, specifically, on television. As Melissa Silverstein observes, most films featuring female presidents are almost all decades old and practically unheard of, with pulpy titles like “Project Moonbase” and “Whoops Apocalypse.” The most famous female politician on the silver screen isn’t playing a president, but a vice president: Glenn Close, in 1997’s “Air Force One.” Her character nearly signs an executive order making herself the president when the elected president, Harrison Ford, is put in mortal danger. But Close’s character chooses not to sign—which is played, in the film, as a form of loyalty, but reads also like some hesitance in making a woman even temporarily the commander-in-chief, even though she acts as one for a good chunk of the film.

But on TV, there’s a whole subset of politically leaning shows that are grappling with the idea of a female president—the ambition of this woman, what her marriage would be like, and the specific, gendered obstacles that she would have to deal with. In the years right before Hillary Clinton’s 2008 bid for the presidency, numerous different stories, mostly on television, posited some kind of female president, in what was, perhaps, a little micro-trend: Syfy’s “Battlestar Galactica” (2004), Rod Lurie’s CBS series “Commander in Chief” (2005), and “Prison Break” (2005; Patricia Wettig’s character became president in 2007). Interestingly, Aaron Sorkin’s “The West Wing,” arguably the most popular show about the presidency, never strayed into the territory of a female commander-in-chief. But that might be because the most prominent female candidate for president, at the time, was Republican Elizabeth Dole, who briefly ran for the office in 2000. Geena Davis’ president in “Commander in Chief” is a Republican, Patricia Wettig’s Caroline Reynolds is implied to be conservative, and Laura Roslin (Mary McDonnell), in “Battlestar Galactica,” exists in a universe without our political parties, but is demonstrably hawkish.

Then Hillary Clinton ran—and, maybe most crucial for the representation of female politicians on TV, she lost. She became the thwarted symbol of what a female president would be like. And as such, there are incarnations of her peppered all over today’s current TV landscape.

“The Good Wife,” which debuted in 2009, borrowed from numerous real-life political scandals—but the story of a woman standing by her husband through a long, salacious scandal at the intersection of politics and sex is Hillary Clinton’s story, no matter how many politicians' wives have unwillingly followed in her footsteps. Alicia Florrick (Julianna Margulies) has latent political ambitions that only come to her much later in life—indeed, it’s only in this past season that Alicia has run for office for the first time. In the meantime, she has had to find a way to come to terms with her philandering husband (check) and pursue her own ambitions to run for the exact same office her husband brought scandal to (check and check).

“Parks And Recreation,” also from 2009, didn’t even bother making the Hillary Clinton comparisons subtle. The show’s protagonist was Amy Poehler’s sunny, determined, hardworking Leslie Knope—and she had a framed picture of Clinton on her office wall, along with Nancy Pelosi, Condoleezza Rice, and Madeleine Albright. Knope didn’t have a back story of scandal or a reputation for being close to Wall Street—but she had Clinton’s ambition to go all the way to the top (and as the finale reveals, she succeeds).

“Veep,” which debuted in 2012, tells the story of constantly thwarted Vice President Selina Meyer (Julia Louis-Dreyfus), a petite woman whose ability to go toe-to-toe with Washington’s worst chauvinists is matched only by her unyielding ambition. And her career is marked, maybe forever, by the bitterness of almost winning—and then being made to serve the administration of her former rival as the overlooked and ignored veep. The show’s biggest nod to Clinton occurred in the second season, when Selina started to tear up at an event where she’s threatened with failure—an echo of Clinton’s tears in New Hampshire, during the 2008 primaries. Since then, Selina has ascended to the Oval Office, mostly through dumb luck—and her unrestrained glee at finally being on top is the type of feminine ambition we rarely see fulfilled in pop culture.

CBS's “Madam Secretary,” which debuted last year, opted to tell the part of Clinton’s story that was her interim position, in between campaigning for president—secretary of state. Téa Leoni plays the blond, well-heeled Cabinet member in that series. In ABC's "Scandal," first lady Melanie Grant (Bellamy Young) finally voiced her own long-smoldering ambition to hold the title her philandering husband currently has. And in NBC’s “State of Affairs,” Alfre Woodard plays the president in a messily defined supporting role. The specter of Hillary is everywhere.

Surprisingly, though, the show that has most obviously tried to tell the story of Hillary and Bill Clinton is lurid, deadly “House of Cards,” on Netflix. The show’s incredibly dark interpretation of Washington politics invokes both Shakespeare and Machiavelli; it also plays into the world’s worst fears (or wildest fantasies) about what the Clintons are. The couple at the center of the story, Frank and Claire Underwood, are, when the show starts, a mostly functional power couple hell-bent on acquiring everything in their path. Their ambition has led to Frank (Kevin Spacey, putting on a Southern drawl) ascending to the White House, leaving any number of dead bodies and jilted lovers along the way. But once he got there, Claire (Robin Wright) started to get antsy; she was bored with social duties, and wanted the spotlight for herself. The third season of the show, which debuted in February, depicts the beginning of Claire’s ambitions for higher office. “I should have never made you ambassador,” he says to her, frustrated. Claire responds with the most important line of the entire series: “I should have never made you president.” The season ends with her walking out of the White House to begin her own campaign for walking into it again—but this time, on her own terms.

Yes, these are all outsize interpretations of Hillary Clinton—but they all contain some truth of Hillary’s reality. Because the vast majority of these shows are currently in story lines where their heroine is desperate, overlooked or in dire straits—and the implication, in every story, is because these politicians happen to be women.

This might be most poignant in the current arc of “The Good Wife,” which ended this past Sunday—just hours after Clinton’s announcement—with a jagged twist out of left field. Alicia won the state’s attorney’s race a few episodes ago, and has been preparing for her future term in political office ever since. But in “Winning Ugly,” a voting fraud scandal pops up out of seemingly nowhere, tarnishing her victory. In the fallout, the Illinois Democratic Party—of which she is a member—pins the fraud on her, forcing her to resign, so that the rest of the party can avoid the brouhaha. Alicia is thrown under the bus, with graceless brutality. It takes the form of her reputation being denounced to the election review board, with the conclusion that she should resign before her term is set to begin. Disgraced and disempowered Alicia collapses into bitter sobs in the privacy of her own apartment—the hard work of years of her life trashed in just a few hours. She says to one of her advisers: “It never ends, does it?” And he responds, unhelpfully, “Lifea… sucks.”

What’s unsaid—and crucial, I think—is that life sucks more when you’re a woman running for office. Traister, in her column on Hillary Clinton’s presidency, reminds us not to conflate the candidate with all women, or all women with the candidate. “I hope we won’t reduce every question about gender and Clinton to easy binaries: ‘Did she win because she’s a woman?’ Or, ‘Did she lose because of sexism?’” On the other hand, though, it’s hard not to see, in Clinton, the many women, imagined and real, who have dreamed the impossible dream. It may not be Clinton’s title to win. But our pop culture, at least, is thirsty for our first female president.