The Ivy League's favorite war criminal: Why the atrocities of Henry Kissinger should be mandatory reading

In an appearance at Yale last week, the Nixon official's horrific record was casually glossed over. But why? 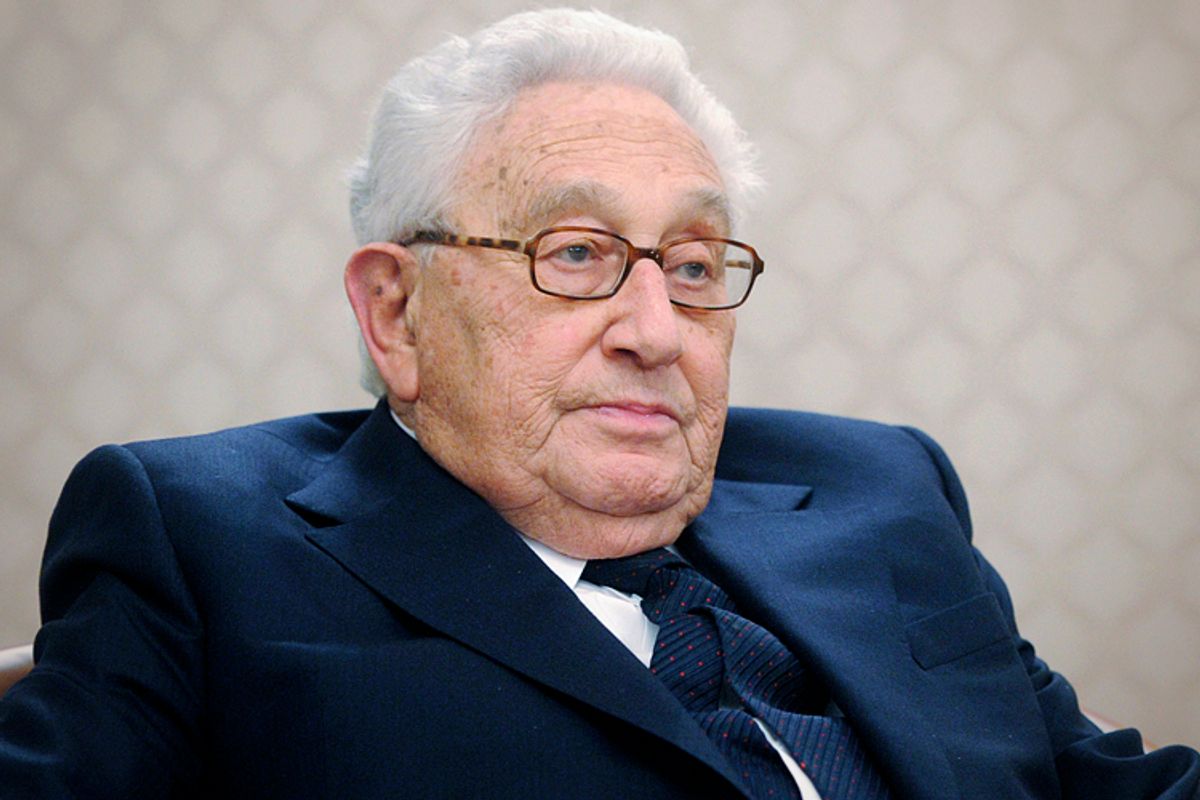 Ex-government officials have always occupied a particular sweet spot for members the Ivy League. Regardless of what one did while in power, regardless of how disreputable or immoral or even criminal one’s actions, the elite academy has been all too willing to embrace even the most dubious of former officials.

So it was that last Friday night, Henry Kissinger spoke at Yale -- to which he has donated an archive of personal documents, where he occasionally participates in a course with Cold War historian John Lewis Gaddis, and where he give an invite-only talk just a year ago. Last week's “conversation” was moderated by Harvard Professor Niall Ferguson, who is also Henry Kissinger’s official biographer. As if to underscore the incestuous insider game on display, sitting in the third row was Paul Bremer, the "Administrator" of the Coalition Provisional Authority in Iraq, the man who de-Baathified the country, threw millions of people out of work, and helped destroy the Iraqi state, which spurred the insurgency, the Sunni-Shia civil war, and later the transmogrification of al Qaeda in Mesopotamia into the Islamic State. A record to proudly burnish in and around Yale University.

At least members of the Yale community would be allowed to ask questions of Mr. Kissinger, challenge him on his public record, and dispute the wrongheaded assessment of the US-Iran nuclear deal he penned in the The Wall Street Journal just days prior, right? Wrong. Ferguson was to screen all questions ahead of time, and the questions Mr. Kissinger received were the intellectual equivalent of underhand softballs. There was a discussion of “World Order,” Kissinger’s latest book, questions about Iran and the Middle East, ruminations on China. Every question Ferguson asked could have been competently answered by an undergraduate.

The Yale community was not however informed—just as the WSJ, Washington Post, and New York Times do not inform their readers—that Kissinger is Chairman of Kissinger Associates, a global consulting firm that has clients in the Gulf region of the Middle East and other regions Kissinger opines on. This is a classic conflict of interest. Astute readers will recall that Kissinger resigned the chairmanship of the 9/11 Commission when the Senate Ethics Committee, along with prominent voices in the media, demanded Kissinger disclose his client list.

It is disturbing to observe famous ex-government officials paid one complement after another, given the floor in the auditorium of an elite university, and then protected from actual, difficult questions the public may have. Why is it that “intellectuals” like Mr. Kissinger are so afraid of being confronted, through argument and evidence, over their records? My own question, on Kissinger’s complicity in the 1971 genocide in Bangladesh that left up to three million people dead, was conveniently ignored by Ferguson. The moderator is supposed to ensure a real conversation takes place. Ferguson did the opposite: He guarded his subject and censored tough questions.

While critics often argue that free speech on university campuses is threatened by an overly-PC, overly-sensitive culture, the contest over ideas is actually threatened far more by powerful men like Kissinger (and Ferguson), who would rather commend each other for their great work than have a real debate over war crimes and human rights abuses. When you’re an insider, you’re an insider for life—and that means you get away with anything, decades after you left office.

So, in the interest of Lux et Veritas—“Light and Truth,” Yale’s official motto—a brief recapitulation of Kissinger’s record is in order:

Five days before the 1968 election, President Lyndon B. Johnson ordered a bombing halt of North Vietnam to begin negotiating an end to the Vietnam War. Johnson needed to keep this decision a secret; any leak could jeopardize the peace he was seeking. Kissinger, who had been an adviser to the negotiators, called the Nixon campaign and said, “I’ve got some information. They’re breaking out the champagne in Paris.” In his own memoirs, Richard Nixon says that he had received advanced word of the negotiation “through a highly unusual channel.” Three days before the election, the South Vietnamese pulled out of the talks because a Nixon confidant named Anna Chennault informed them that they would get a better deal under a Republican administration. The number of Vietnamese and Americans killed because of Kissinger and Nixon’s sabotage of the Paris negotiations remain unaccounted.

Nixon-Kissinger expanded the Vietnam War to include carpet bombings of Laos and Cambodia. “It’s an order, it’s to be done. Anything that flies, on anything that moves. You got that?” is how Kissinger relayed his boss’s order. Nearly 3 million tons of bombs were dropped on Cambodia alone, more than the 2 million tons dropped during all of World War Two. Between 4,000 and 150,000 civilians were killed in carpet bombings codenamed Breakfast, Lunch, Snack, Dinner, Supper, and Dessert. The unintended consequence of this illegal expansion of the Vietnam War was the rise of the Khmer Rouge in Cambodia, a genocidal cult that killed between 1.5 and 3 million people. Kissinger, in a conversation with the Thai Foreign Minister in 1975, said, “You should tell the Cambodians (i.e., Khmer Rouge) that we will be friends with them.” This was not realpolitik but accessory to murder.

3. Complicity in Pakistan’s Genocide in Bangladesh

In 1971, Bangladesh (then East Pakistan) declared independence from Pakistan after winning a democratic election that was not honored by the military dictatorship in power. The Pakistani junta attempted to suppress the victors by mass-raping women, shooting indiscriminately, and murdering children. Bangladesh’s Hindu minority was specifically targeted. In one especially gruesome episode, Pakistani soldiers went room-to-room in Dhaka University, murdering every student and staff member in sight. Up to three million people were killed and 400,000 women mass-raped in the 1971 genocide.

The top American diplomat in Dhaka, Archer Blood, sent a telegram to Nixon and Kissinger that began: “Our government had failed to denounce the suppression of democracy. Our government has failed to denounce atrocities. Our government has failed to take forceful measures to protect its citizens while at the same time bending over backwards to placate the West Pak[istan] dominated government.” As Professor Gary Bass recounts in his magnificent book, "The Blood Telegram," this was not mere realism in international affairs: There was a certain emotional relish Nixon and Kissinger felt in mocking massacred Bengalis. Kissinger congratulated Pakistani dictator Yahya Khan for his “delicacy and tact.” Nixon said Indians needed “a mass famine.” Kissinger ridiculed those who “bleed” for “the dying Bengalis.”

If presented with the content of such statements, with the names redacted, one would think that these were criminals speaking, not American statesmen.

Kissinger aided the violent overthrow of Chile’s government by the war criminal Augosto Pinochet in 1973. “I don’t see why we need to stand by and watch a country go Communist due to the irresponsibility of its people,” he said. He encouraged Iraqi Kurds to rebel in 1975 only to abandon them when Saddam Hussein struck a deal with the Shah of Iran, and he gave the U.S.’s blessings to Indonesian strongman Suharto’s invasion of East Timor. Kissinger knew of plans to overthrow Archbishop Makarios in Cyprus and later of Turkey’s planned invasion of the island and yet did nothing. 180,000 Greek Cypriots had to flee their homes, 10,000 Turkish Cypriots were forced to relocate, and Turkey still has an undetermined number of settlers in Cyprus. The capital of Cyprus, Nicosia, remains divided.

The bitter irony of all of this is that Henry Kissinger spoke at Yale Law School — the institution I currently attend, and one with a long history of progressive thought and a commitment to educating public-minded lawyers. Kissinger should not be barred from giving lectures. Rather, his invitations—like all invitations to government officials—should come with an understanding that he will field challenging questions. Public officials are servants of the public first, and we must not allow them to be turned into demigods without protesting their past crimes and holding them to account.

The nameless victims of Henry Kissinger’s policies will never see justice. They will not be lavished with praise or given large contracts for consulting services or given ample space in major newspapers to correct the record. They will never see a courtroom. They will remain the anonymous dead, and those of us who stay silent or jump up like Pavlovian dogs to mindlessly clap for every grey-haired former official who comes into town regardless of their record, we too will be complicit in their fates.

Omer Aziz is a writer and student at Yale Law School. Follow him on Twitter at @omeraziz12.