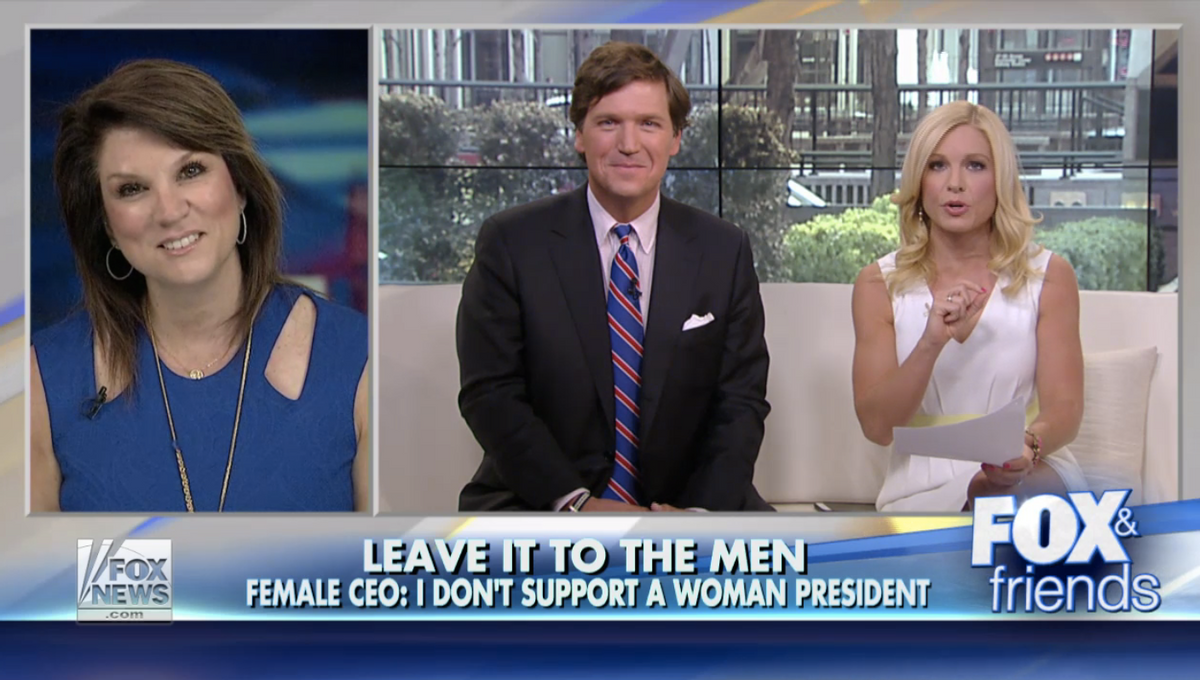 It would seem to take a truly far-out view to make Tucker Carlson disavow sexism, but Go Ape Marketing CEO Cheryl Rios is championing the unpopular opinion that has made the Fox News host do just that.

Rios appeared on "Fox & Friends" on Sunday to respond to criticism over the viral Facebook post in which she asserted that no woman -- least of all Hillary Clinton -- should be president because of "hormones." Carlson and his co-host Anna Kooiman gave Rios a chance to defend herself against the "cyberbullying" she's received over the post, but they also challenged her views.

"I truly do believe a woman shouldn't be president," Rios said. "For all the people that think I'm saying women shouldn't be successful and do great things and build great things ... that's not what I said. I was speaking of one particular position, and that was president."

"I guess no one can call you sexist, which must be nice," Carlson replied. "But you go on to make the point that it's really the use of force that makes you uncomfortable in the hands of a woman. The one thing I think I would agree with is, I think we assume women are more peace-loving, and I don't think that's necessarily true."

Rios denied that her issue with the idea of a female president isn't specific to the use of force, but rather is based on the fact that men and women are "built completely different." "I just believe in an old-fashioned way of things, where the man is the head of the household," she said. "The man is the head of the free world, of the country, and women take more of a subordinate role behind him."

Kooiman, attempting to present two sides to the argument, asserted that "a lot of women" would call Rios' stance "completely backwards." She got heated in challenging the CEO's view, asking how one rationalizes the opinion that a woman can perform one high-stress job, but not another.

"That’s like telling a woman, 'You know, you can teach preschool, you can lead the choir, but you can’t be a pastor,'" the co-host said. "You’re a CEO yourself, you’re a strong woman! What on Earth would make you think you can do this high-stress job, but not that one because of hormones?"

"It's not just hormones," Rios responded. "God made us completely different. He made men and women different, and we have different roles. Just because I run a company doesn’t mean you have to agree with my opinion. We have different opinions and that’s what makes this world great."

"I'm not saying I agree with you," Carlson concluded. "I obviously would never do that. But I admire your willingness to say unpopular things in this age of conformity. You are a brave woman, regardless of whether you're right or not."

Watch Rios' appearance on "Fox & Friends," via Raw Story, below: