From tragedy to farce: The GOP primary shows the rapid collapse of American democracy

News from the Kochs and Jeb Bush suggests Citizens United is destroying the U.S. even quicker than critics feared 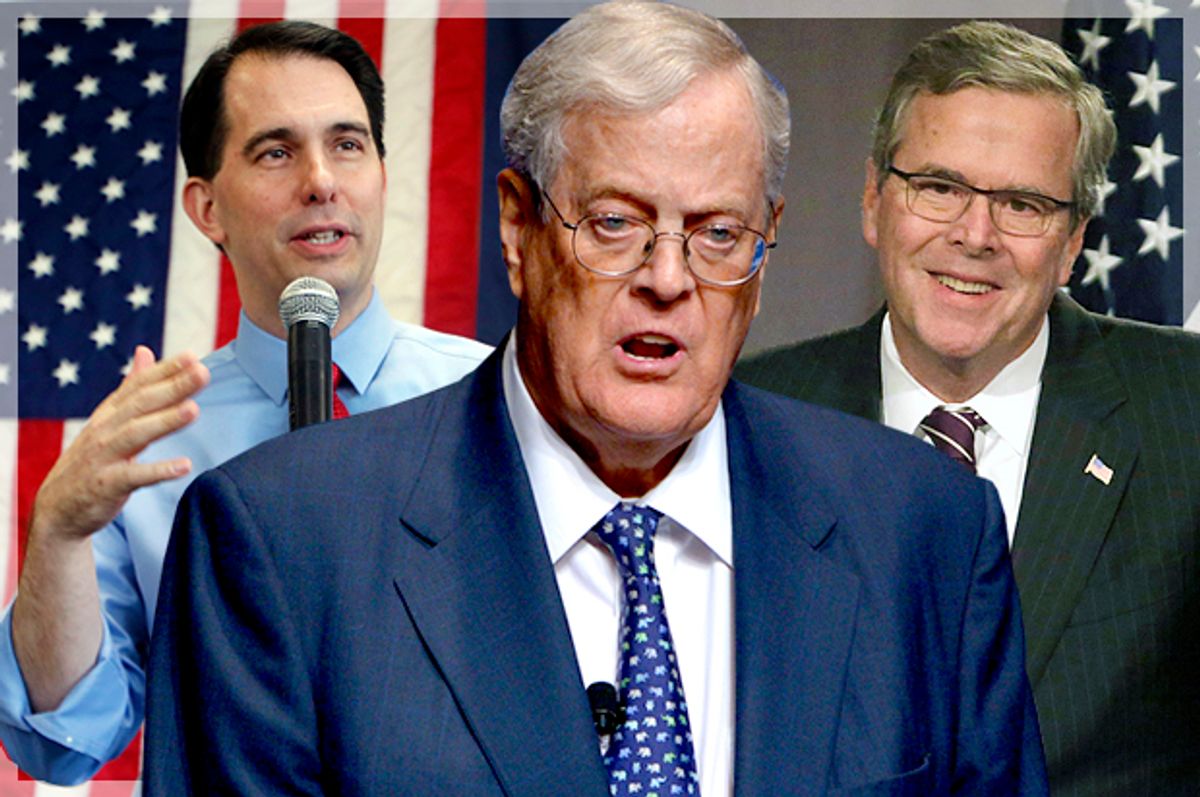 Except for being old white guys from California, Supreme Court Justice Anthony Kennedy and tech billionaire Gordon Moore don’t appear to have much in common. But since the 50th anniversary of Moore’s eponymous law has been sharing media space with the GOP’s presidential primary, I’ve had both on my mind. And I’m starting to wonder if these two historic figures are more similar than we realize.

For those who don’t know, an unsophisticated understanding of Moore’s Law — which in truth is more of a prediction — would hold that computer chip performance doubles about every 18 months. That’s part of the reason modern toys like laptops and smart phones seem to improve so rapidly while more or less staying the same price. The improvement is exponential.

Well, after reading about the latest happenings in the GOP’s “invisible primary,” I think it’s time we consider establishing a similar law for the realm of campaign finance. It would be an homage to Moore, and it would hold that in the post-Citizens United era, the political influence of the 1 percent increases exponentially. We’ll call it Kennedy’s Law, in honor of Justice Kennedy; and so Americans living in the Second Gilded Age’s new plutocracy know exactly whom to thank.

I’m joking, of course. But the reality I’m describing is not especially amusing. In the campaign finance system Kennedy and his fellow conservative justices gave us, a single private citizen can express a single personal opinion — and, almost immediately, upend a national race. That’s what happened on Monday, when the New York Times reported that the billionaire right-wing activists known as the Koch brothers had picked Wisconsin Gov. Scott Walker as their favored candidate for the 2016 campaign.

A subsequent report from Politico cast some doubt on whether David Koch’s claim that Walker should be the GOP’s nominee was as ironclad as the Times indicated. But that doesn’t matter, really. What matters is that because Kennedy illogically and unnecessarily claimed in the Court’s Citizens United opinion that “independent expenditures … do not give rise to corruption or the appearance of corruption,” a cryptic remark from one wingnut billionaire can have major implications for a country of more than 300 million.

Despite how farcical such a state of affairs is already, it’s only going to get worse. One of the crucial assumptions Kennedy used to justify Citizens United, for example, was that a big-spending independent group could be barred from coordinating with a candidate. Kennedy reasoned that if a political nonprofit wants to pay for ads attacking Politician X, there won’t be corruption — or even its appearance — unless the nonprofit worked directly with X’s opponent. If the nonprofit were run by X’s allies, it would make no difference.

Opponents of the ruling thought the hypothetical was patently ridiculous. They figured that any wall built between a candidate and her allies would be highly permeable at best. But another recent development from the GOP primary, this time involving former Florida Gov. Jeb Bush, suggests the pretense of non-coordination is falling apart even more rapidly than expected, and that we may be about to witness the birth of a whole new kind of presidential campaign.

Technically, Bush is not yet a candidate for president. But he’s fundraising indefatigably for his Right to Rise super PAC, which he can “coordinate” with so long as his campaign remains undeclared. That’ll be money well-saved, too, according to the Associated Press: Bush is planning to be the first serious candidate ever to “outsource” to the super PAC much of the work usually done by the official campaign. Thanks to Justice Kennedy, the super PAC won’t be constrained by fundraising limits.

If Bush carries through with the strategy reported by the AP, we’ll be expected to believe that the super PAC handling Bush’s television ads, direct mail duties, data collection and more is not coordinating with the candidate or his staff. As anti-regulation absolutist David Keating tells the AP, rather laughably, such non-coordination will require “a high level of discipline.” I’m sure Bush’s allies and partners are doing willpower exercises and attending self-help seminars already.

According to Pro Publica and the Daily Beast, the 2014 campaign saw an increase in fundraising for super PACs “dominated” by a single donor. Around $113 million was raised by such groups. Not only did that come out to be some 16 percent of all the money raised by super PACs in 2014, but it was four times the share of what they raised during the 2012 campaign. That’s how Kennedy’s Law works in the real world. I can hardly imagine what new absurdities 2016 will bring.