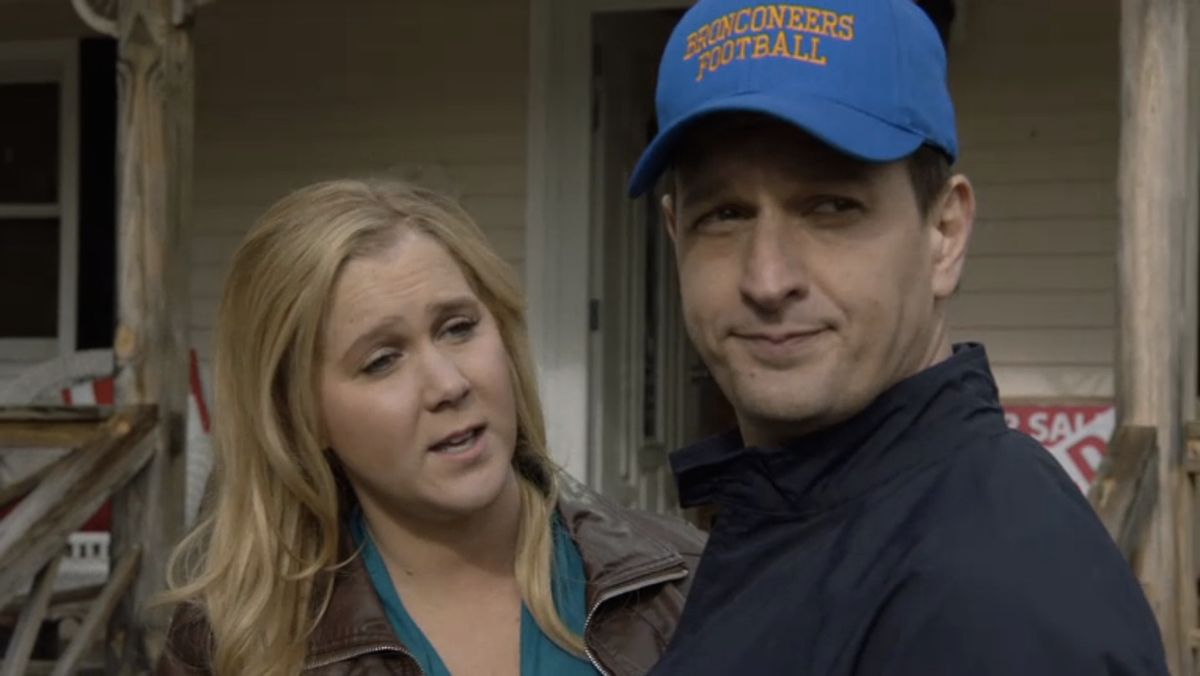 "Inside Amy Schumer" isn’t quite like other sketch shows on TV. Executive producer Dan Powell dubbed it a "brashly feminist show,” while Schumer herself has spoken out about her desire to educate as well as inform -- a sensibility that has only grown as the show has evolved. As our own Sonia Saraiya writes, this is a show that is "very aware that men are watching—and one that works to first capture the attention of that assumed male gaze and then take it to unlikely, unsettling extremes." And last night’s Season 3 premiere was a brilliant first outing, managing to dart from one hot-button cultural issue to another with almost methodical precision, yet always with Schumer’s singularly light touch. The show is on-message without being preachy, overtly progressive without ever stopping being fun. Here's what was under Amy's magnifying glass this week:

The show began on a light note, sending up our recent cultural obsession with singing about women's butts ("Anaconda," "Booty," etc.) by pushing the trend to its most ridiculous extreme. Alongside guests like Amber Rose, Jemima Kirke and Method Man, Schumer shimmies and shakes in a series of absurd get-ups — sparly spandex, dreadlocks — while offering up an ode to the music world's most vaunted body part. Belting out praise for her “turd cutter, dookie maker, fudge machine," Schumer finally hammers the bizarre trend home with a very catchy refrain: “This is what you think is hot? This is where my poo comes out." Twerk, rinse, repeat.

After that, things heat up fast, with a "Friday Night Lights" parody called “Football Town Nights” featuring returning guest Josh Charles as a high school football coach who moves to a small town ("Stewford Heights," which of course calls to mind Steubenville, Ohio) with just one simple rule in his playbook: No raping. Of course, it's not actually so simple: Coach is met with a slew of ridiculous (and yet, unfortunately not so implausible) questions from his team, like “Can we rape at away games?" "What if someone else is raping her, right, and I’m just like filming it on my phone?" and "What if my mom is the DA and won’t prosecute, can I rape?”

It's not an easy topic to riff on, yet the sketch succeeds by avoiding any focus on the victim and targeting the bizarre, ingrained societal attitudes that allows such a culture to arise (to wit -- it's not just the players, but the townspeople, who protest the new coach's arrival). The sketch is evocative of last year's “A Very Realistic Military Game” bit addressing rape in the military, which similarly demonstrated Schumer's adeptness at tackling sensitive topics. As Schumer herself said recently at a Comedy Central panel:

"Rape is good fodder for comedy because it’s the worst thing in the whole world, so it’s untouchable … We’re not just like, rape’s hilarious. It’s always a risk, some people will always be upset just at hearing the word, and you can maybe look at that scene and think we’re making light of something serious. We’re really trying to educate, but that’s not always clear. We know what message we want to send, and we also think the premise is funny, and then we’ll go to town."

Perhaps the standout of the night, this sketch showed Schumer wandering upon three of her heroes — Julia Louis-Dreyfus, Patricia Arquette and Tina Fey — dining in an idyllic, pastoral grove. Why? Because it’s the final day that Hollywood has deemed Louis-Dreyfus “fuckable" -- or as Tina Fey puts it, "you know how Sally Field was Tom Hanks' love interest in 'Punchline' and then, like, 20 minutes later, she was his mom in 'Forrest Gump'?" The segment beautifully skewers Hollywood’s ridiculous beauty standards and its demeaning treatment of women over 40, all while providing the sort of gleeful frisson you get from seeing a bunch of awesome women calling out bullshit as it is. It's the fun of all your favorite people being in on the joke together, in a way that few other than Schumer (and occasionally Lorne Michaels) can provide.

In this faux birth control ad, Schumer tackles the ridiculous hurdles women face in accessing contraception. "Ask your doctor if birth control is right for you," a patronizing voice-over demands, before listing all the other men you should ask -- like "your boss," "your boss's priest" and "a Boy Scout." As with much of Schumer's material, it's a simple premise that perfectly sends up an absurd aspect of our culture, and lays bare its lunacy in turn.

In the final segment, Schumer sheds the rest of the episode's sketch framework and sits down at a bar for a chat with a trans woman named Bailey Jay. In a candid and humane conversation, Jay opens up about her story and disarms misconceptions people may have about her. The notion that a late-night sketch comedy show would offer up something this earnest and genuinely informative is basically unheard of, and it's thrilling to watch Schumer rewrite the rules as she goes along. Schumer wants to be funny, of course, but she also wants to break down barriers of misunderstanding and confront prejudice where it exists. The ability to do both is what puts her a cut above the rest.