"I'll drop your a**": Watch what happens when a GOP congressman and his constituents collide over "the amnesty"

Freshman Rep. Steve Knight is not finding it all that easy to explain the party's about-face on "amnesty" 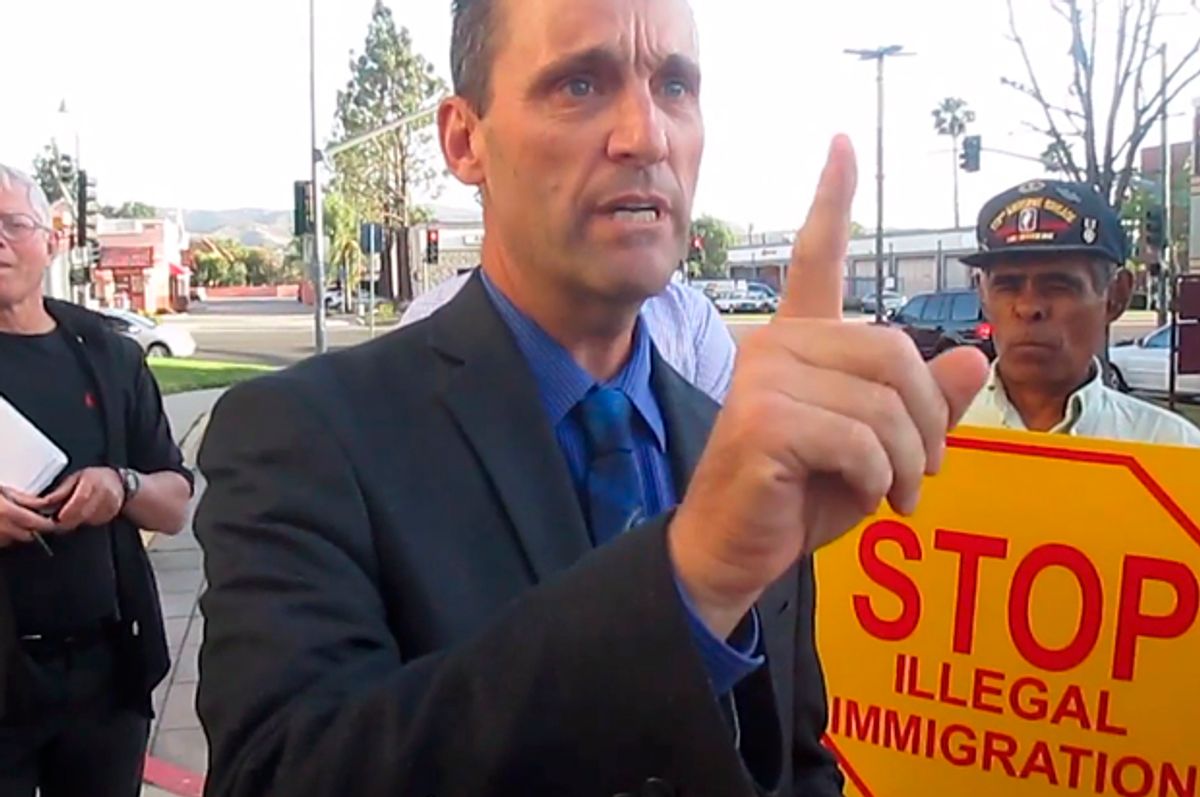 This, this right here, this is the good stuff. There's nothing quite as satisfying as a Republican House candidate making all sorts of pledges to STOP THE AMNESTY during his campaign, then realizing once he gets to Congress that he has no leverage to achieve that, and then getting all angry when the hotheads he pandered to during the campaign get in his face about his Betrayal.

Meet freshman Rep. Steve Knight from California. Scary-looking fellow, no? And with the attitude to back it up. At a run-in with anti-"amnesty" protesters this weekend, a constituent named Mike got in Knight's face about breaking his pledge not to vote for "amnesty." Mike gives Knight a long, firm handshake and then what we'll call a crisp slap on the shoulder. Knight goes after Mike and tells him, "If you touch me again, I'll drop your ass."

It's great to see that the House Republicans have found a new violent meathead to replace ex-Rep. Michael Grimm.

Once things cool down, Knight walks the protesters through the votes in question over H.R. 240, the DHS appropriations bill. His play-by-play of the back and forth is largely correct for a while. The House passed a DHS appropriations bill that would have defunded President Obama's executive actions on immigration, but it failed to get 60 votes in the Senate. Only at the end does he try to race past the truth. He says the Senate "stripped out the amnesty" and funded DHS, and only then did he vote for it. But what the Senate "stripped out" in the end was not "the amnesty." It stripped out defunding of "the amnesty." So he is indeed lying to these protesters about what he voted for, which was a "clean" DHS appropriations bill funding President Obama's executive actions -- or, as they would have it, "the amnesty."

If Steve Knight and his constituents want to fight each other to the death, that's up to them. But let's use this opportunity to consider again the shifting definitions of "the amnesty." These poor souls are stuck in the GOP's 2014, base-friendly, midterm definition of "the amnesty" as anything less than maximal deportation policies. No deferred deportations or prosecutorial discretion or path to legal status or citizenship -- that's all "amnesty" when you're trying to rile up the base in a low-turnout election, because it all falls short of rounding up every undocumented immigrant and "throwin' 'em back over the fence," as is the term of art.

But now we're in the 2016 cycle, a presidential election cycle, and the GOP would like to find some way to push its share of the Hispanic vote above 30 percent. Hispanic voters are by no means one-issue voters but, as we saw in 2012, cranky nativist rhetoric makes non-white voters in general less inclined to hear out the Republican Party on anything else.

The viable 2016 GOP candidates quietly have begun to converge around an immigration platform that would not pass the party's 2014 test: first securing the border, then considering a path to legal status -- but not full citizenship -- for the nation's 11-12 million undocumented immigrants. (Scott Walker, it should be said, mixed things up this week by randomly suggesting that we need to crack down on legal immigration too. In Walker's defense, he rarely has any idea what he's saying.)

The task these candidates now have with GOP primary voters is convincing them that a path to legal status does not count as "the amnesty," after spending the last two years conditioning them to believe that any sort of legal status is absolutely "the amnesty." I don't know about you all, but I don't think that this Mike fellow who nearly comes to fisticuffs with Rep. Steve Knight is all that persuadable. The only question is what percentage of the GOP electorate the Mikes of the country represent.