In the wake of "50 Shades of Grey," what's even better than sex? Ridiculous sex

Ripe for parody, "50 Shades" has inspired a whole new genre of humor erotica. "Taken by the T-Rex," anyone? 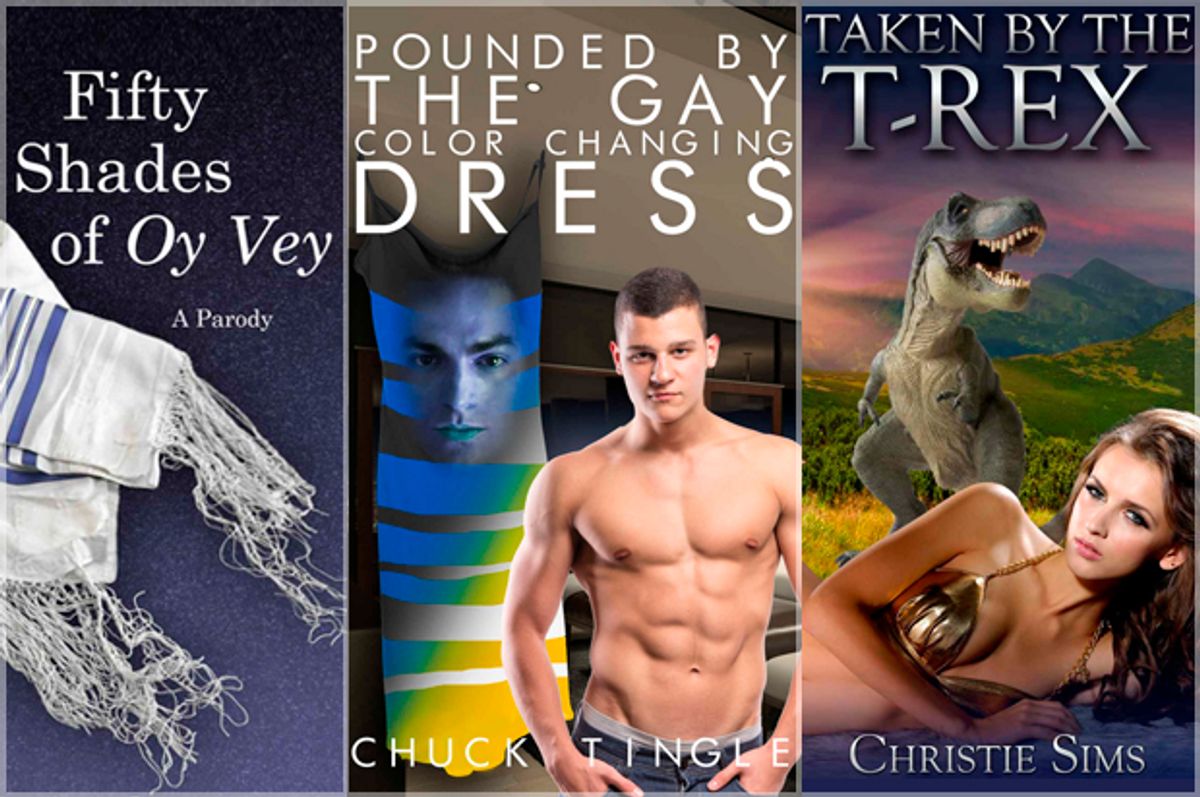 Sometimes laughter isn’t just the best medicine—it’s even better than sex. Combine the two in our post-"Fifty Shades of Grey" world and you have the increasingly popular genre of humor erotica, allowing us to laugh both at it and with it.

I started to notice it soon after "Fifty Shades" rose to prominence, when the trilogy’s success spawned parodies such as "Fifty Shades of Oy Vey," "Fifty Shades of Neigh" and "Fifty Sheds of Grey," along with seemingly umpteen more. Some authors seemed like they were in it to make a quick buck, while others, such as Phil Torcivia, who parodied each of James’ books, penned more careful, yet still funny, parodies with a point to make. Andrew Shaffer was one of the most prominent with his novel "Fifty Shames of Earl Grey," about which Shaffer told Salon, “If 'Fifty Shades of Grey' hadn't become the biggest book of 2012, there wouldn't have been any reason to parody it—E.L. James' writing is almost a parody of erotic romance to begin with.”

Next came a wave of dinosaur and monster erotica with titles like "Taken by the T-Rex" and "Cum for Bigfoot." In 2015, in addition to Rob Gronkowski-themed football erotica going mainstream, we’ve seen humorous erotica taken to its most ridiculous extremes with authors like Chuck Tingle and Leonard Delaney, the former outdoing even himself with the recent title "Pounded in the Butt by My Own Butt." Yes, its contents are as crazy as its title, but Tingler has managed to get media folks talking about erotica with genuine appreciation in ways I don’t often see happening for more mainstream authors. Take Jamie Peck’s in-depth analysis of "Pounded in the Butt" at Death & Taxes, or writer Ashley Ford’s tweet asking, “What if I started a house reading series, where I served various expensive cheeses and cheap wines and read Chuck Tingle stories out loud?” Tingle got a writeup in the New York Observer, which dubbed his work “Amazon’s most absurd gay erotica,” while Delaney’s been featured on Boing Boing and CNET.

Are their stories sexy? Are they turning readers on? Who cares, the writers seem to be saying, as long as they’re entertaining. Tingle, in particular, has played the role of author as character to a T, his aw-shucks Billings, Montana, dad image alive and well even on Twitter. When I asked him via email what makes his books so popular, this was his reply (which I hope it’s clear I’ve left unedited): “imagination is real and it is the heart of books, makes for fun times to share around the campfire or maybe late at night in bed.  hopefully not too dark though so you dont get spooked. best tinglers give you a feeling like you want to kiss and maybe more? so not too spooky and with some abs too like channing tatum or maybe mark magraff from the hit band sugar ray. sounds like a real best selling!”

I can’t help being both charmed and impressed that he could not only turn around "Pounded by the Gay Color Changing Dress" practically overnight, but also made me literally laugh out loud with lines like, “I need both worlds in my life, a little love and a little danger. I need someone who makes a lot of gold, but isn’t afraid to get black and blue when push comes to shove.”

Similarly, by tapping into our combined fascination and revulsion with modern technology in "Conquered by Clippy" and "Invaded by the iWatch" (which Fusion reenacted to great comedic effect), Delaney’s books offer a way to let off steam that does not necessarily involve getting off in the orgasmic sense. Delaney told Salon, “Basically I get my ideas from the world around me. I see things and think, How could that be sexier? What if it had genitals? What if it had additional orifices?”

Perhaps the success of these authors, judging by their media attention and Twitter fandom, is a reaction to the extreme level of hype around books like "Twilight" and "Fifty Shades of Grey." As one Reddit commenter put it regarding Delaney, “Still a better love story than twilight.” Maybe instead of yet another emotionally stunted billionaire hero who can seemingly buy his way into a young woman’s heart, readers want the weird, the twisted, the unusual.

What’s especially noteworthy is how, in a genre as crowded as erotica, this subset has managed to win kudos from writers of more traditionally XXX tomes, who admiringly tweet things like, “The flying butt is just beautifully done. Wow. Now there's a sentence I never thought I'd utter.” Just as the stress of modern life is leading some to indulge in adult preschool, the more bookish among us also want to zone out and read the equivalent of literary reality TV—zany but riveting. As Delaney explained what he sees as the source of his popularity, “In the age of the Internet, everybody has seen everything, so it takes something extreme to garner attention. Ridiculous sex fits the bill nicely.”