The GOP's raging identity crisis: How Republicans could win the White House—and why they might be too dumb to do it

There are 3 competing strategies for Republican victory in 2016. Picking the wrong one means electoral doom. 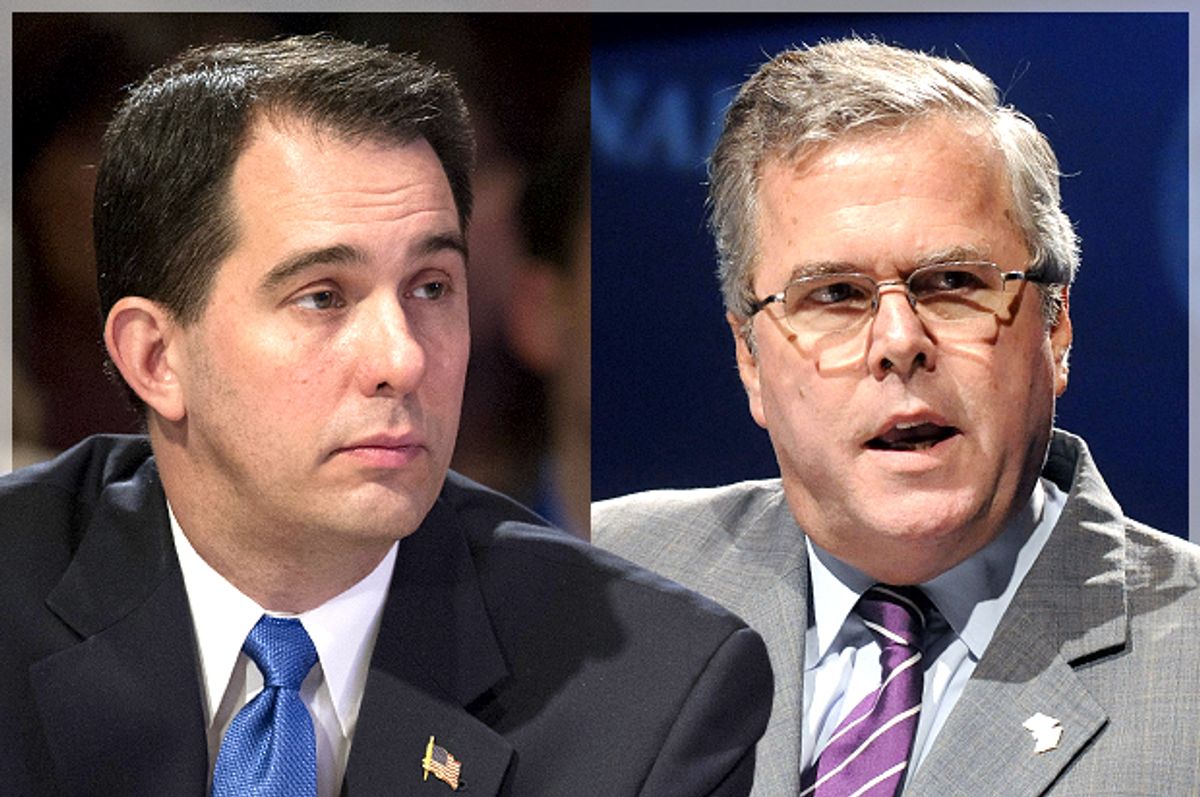 The GOP coalition is increasingly useless at the presidential level.

Gerrymandering and residential segregation in the House of Representatives, depressed turnout in off-year elections, and the disproportionate influence of small, rural states in the Senate and the electoral college have largely hid this reality from view. The American political system is uniquely designed so that a party with very little popular support can effectively stymie the will of the majority at every turn and still remain electorally competitive long after they’ve become broadly disliked. But the story is different in presidential politics, where the socially conservative, middle- and upper-class, white and Christian coalition that delivered the White House to Ronald Reagan and George H.W. Bush are no longer enough to bring Republicans a general election victory.

Examining the stark numbers is useful: The Republican nominee for president has lost the popular vote in 5 of the last 6 Presidential elections. The most recent Pew data show that 48 percent of Americans say they identify as Democrat or lean Democrat, compared with 39 percent on the Republican side. The 2016 Republican primary then, necessarily hinges on how the GOP candidates might be able to adjust to this reality.

There are three broad strategies that Republicans could conceivably follow, and two of them are plausible: shrink the electorate or broaden the base. The other -- energizing the silent conservative majority -- is absurd, but does have some adherents. Each of the Republican candidates are executing variations of one of these three strategies; who gets nominated will largely determine which way the Republican Party is headed.

Let's address each of these strategies in ascending order of plausibility:

The unserious candidates in the GOP primary all adhere to some version of the Silent Conservative Majority thesis. The core idea is that most Americans accept the conservative ideology, and would vote for a truly conservative candidate. The reason Republicans have lost the last two elections, according to this idea, is that the party sold out to moderates. Only a true conservative will bring out conservative voters and bring a victory. Ted Cruz, the leading proponent of this idea, puts it this way: “Today, roughly half of born-again Christians aren’t voting. They’re staying home. Imagine, instead, millions of people of faith all across America coming out to the polls and voting our values.” While Cruz is the leading proponent, the campaigns (or theoretical campaigns) of Bobby Jindal, Rick Perry, Rand Paul and Mike Huckabee all include some version of this thesis. Non-voters tend to be younger, less white, less education and poorer than voters, all of which (with the possible exception of education) skew more liberal, not more conservative. Candidates espousing this thesis tend to frequently cite Ronald Reagan as the heyday of serious conservatism, and hearken back to him wistfully. But more recent political science research suggests that the Reagan White House maintained an extensive internal polling operation to ensure that he could maintain the appearance of a center while still pulling policy in a more conservative direction.

Candidates espousing the Silent Conservative Majority thesis will throw up a lot of dust and energize many very conservative voters, they may even garner some money and a few delegates, but none are serious candidates. They are running to: (1) make money and increase their profile; and (2) to ensure the GOP doesn’t move too far to the center to appeal to voters.

The broad goal here is to go on the offensive: Rather than bringing in new voters, the Republican Party would seek to use its fundraising advantage and reduce the Democratic turnout advantage. This strategy involves: giving business and big money more influence, crushing unions and erecting barriers to voting. The most successful proponent of this strategy is Scott Walker, who has successfully deployed the strategy already in Wisconsin. As Craig Gilbert of the Milwaukee Journal Sentinel notes, “Since they came to power in 2011, Walker and his party have not only changed the way the state is governed, but they have changed the political playing field. In a few big ways and lots of little ways, they have seemingly made it easier for Republicans and harder for Democrats to win elections.”

Walker has crushed a key liberal base, unions, and made it a centerpiece of his presidential run (e.g. by comparing union workers to ISIS). He has also pushed through a Voter ID law and cut early voting, while loosening rules for campaign finance. All of these laws will work to shift the playing field in favor of Republicans. I’ve documented extensively already how low turnout benefits the right. And unions are a key base of progressive support, so crushing them will similarly benefit conservatives.

However, the obvious problem with a strategy of suppressing the vote, aside from the constitutional problems it raises, is that it alienates voters of color who are targeted.

Strategy #3: Broaden The Base

The strategy here is to win enough Latino, Asian and Black voters that the decreasing share of older whites in the voting population doesn’t decrease Republican electoral chances. Indeed, this was George W. Bush’s strategy (he also appealed to social and business conservatives) and, had he been able to pass comprehensive immigration reform, Republicans would be in a much better position today.

While many on the left may feel that this strategy is unlikely to succeed, there are reasons to believe Republicans could indeed peel off some Latino or African-American votes from Democrats. I’ve previously noted, the work of political scientist Spencer Piston, who shows that lighter-skinned Latinos and Asian-Americans are more likely to support the Republicans. The most prominent Republicans are implicitly endorsing this strategy, with both Jeb Bush and Marco Rubio promoting their ability to speak Spanish and reach out to working class voters.

Obviously, the winning candidate will try to deploy all three of these strategies to some extent. However, the strategies conflict with each other. Attempts to shrink the electorate will upset Latinos and Blacks, who will justifiably be angered by attempts to suppress their vote. On the other hand, most attempts to broaden the base, say with immigration reform, will anger the most conservative whites. The strategies above, however, offer a coherent way of thinking about elections that emphasizes strategy, rather than the vagaries of horserace politics. They also offer the key to understanding who will the nomination.

The best strategy above is to broaden the base. Shrinking the electorate has simply reached a point of diminishing returns. Democrats have a robust fundraising operation and a strong get-out-the-vote capacity. Broadening the base led to the only one popular vote win Republicans in two decades -- when Bush captured the White House in 2004 with 40 percent of Latinos. (Claims that he had a higher share are incorrect). Republicans will work to broaden their support during Presidential elections while during midterm elections they will try to reduce turnout and mobilize partisans.

What does it all mean? Either Jeb Bush or Marco Rubio will be the likely nominee. Two factors point to Rubio being stronger. First, because Republicans will want to hit Hillary for being dynastic, a second Bush candidate is risky. (Even if Hillary's history could also make Bush's family name less of the deal-breaker it might otherwise be.) Second, Rubio has strong Tea Party ties that Bush lacks, meaning that he could expand the base without losing too many true conservatives. At this point, he offers Republicans the best chance at winning in 2016.