"She’s very disarming": Why we still judge women in politics on their ability to make you feel comfortable 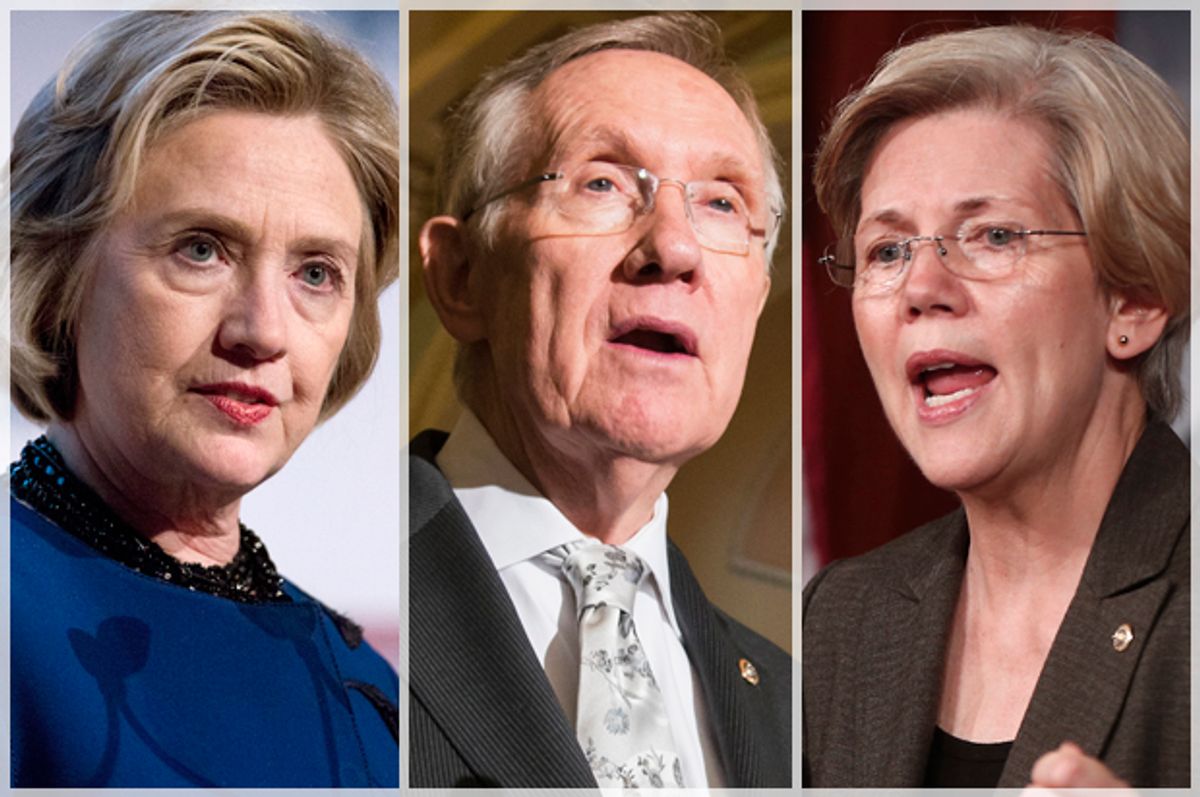 The current issue of the New Yorker features a lengthy profile of Elizabeth Warren and the considerable influence she holds in the Democratic Party, particularly as a progressive force pushing presidential contender Hillary Clinton to the left. Even though she isn’t running herself, the Massachusetts Democrat is a power player in the 2016 race, and she knows it. “You think I’m not forcing a debate?” Warren asked the magazine's Ryan Lizza. “Call me back in a year, and ask me what type of debate we’re having.”

The piece dedicates an impressive 9,000 words to Warren’s personal and political life, and here are 41 immensely distracting ones, courtesy of Harry Reid:

She can be in your face on an issue. But you don’t realize it at the time. She is very, very strong in a unique way. Her No. 1 quality is that great smile she has. It’s true. She’s very disarming.

And there it is. Harry Reid being so very Harry Reid on the subject of women in politics. He's not the only person guilty of this kind of thing, though he has been on a bit of a roll lately.

The New Yorker profile comes just a few weeks after Reid told the New York Times that he believes now is “the time for a woman to run” because “women have qualities that we’ve been lacking in America for a long time.” Reid further explained that he feels “women are much more patient” than men. Women can be “combative” if they are “pushed the wrong way,” but that it’s not their general nature.

And while it seems like Reid thinks Warren has the kind of winning smile the country needs, it isn't winning enough for some. The profile also quotes Warren Buffett, who recently chastised Warren for being too aggressive in going after Wall Street and alienating some of her colleagues in the process. “I think that she would do better if she was less angry and demonized less,” the Berkshire Hathaway CEO said last month. “I believe in ‘hate the sin but love the sinner.’ And I’m not sure that I’ve fully convinced Elizabeth Warren that that’s the way to go."

“I think the whole nature of governing — particularly when you’ve got a divided government like we have now — is that you end up with bills that each side doesn’t like but they like it better than doing nothing,” he continued. “I mean, that’s the way that government has to function. And it does not help when you demonize … the people you’re talking to.”

In both renderings, from Reid and Buffett, Elizabeth Warren is being judged by her ability to make people feel at ease. She might be the single most influential member of the Democratic Party right now, but, in this telling, her real value lies with her ability to disarm her colleagues.

Pushing back against this kind of soft sexism is complicated work. Cultivating relationships and marketing yourself are very much a part of politics, but the pressure to get along is a particularly loaded set of expectations for women, particularly for women like Warren who make up just a fraction of the Senate and are still regarded as something of a political anomaly even in 2015.

To succeed at a certain level, women in politics -- like in other industries -- must be all manner of contradictions. Assertive but never aggressive, confident but never showy, able to go toe to toe with the boys but never emasculating. It’s an exhausting kind of emotional labor, and it’s something that women are tasked with in private and public.

Now there seems to be some rule that you can feel one of two ways about remarks like Reid’s or Buffett’s: that they are evidence that the person behind the remark is a stone cold sexist, or that they somehow aren’t worth talking about in the first place. But that's a disappointing trap. Especially now. More than ever, words like “unconscious bias” and soft sexism are part of the public vocabulary, but we still tend to treat real world examples of these things as insignificant outliers, no matter how many times we see them.

Women continue to make up just 20 percent of the Senate. The nation is losing its damn mind over Hillary Clinton’s candidacy in part because we still don’t really know how to talk about women in public life, much less about a woman who could become president. And when we do tend to talk about it, the conversation is remarkably flat.

Reid might have thought that singing the praises of Warren's "disarming" approach to politics would be offer a counterbalance to the impression from men like Buffett who think she's too aggressive. But it is also a reminder that, even in 2015 --  at a time that we are closer than ever to having a woman in the White House -- a woman's ability to succeed is still pegged, at least in part, to her ability to make you feel disarmed.