The GOP's demonic alliance: How the religious right & big business are dumbing down America

It's a tradition as old as the nation itself: The right rejects intellectualism in favor of a perverse religiosity 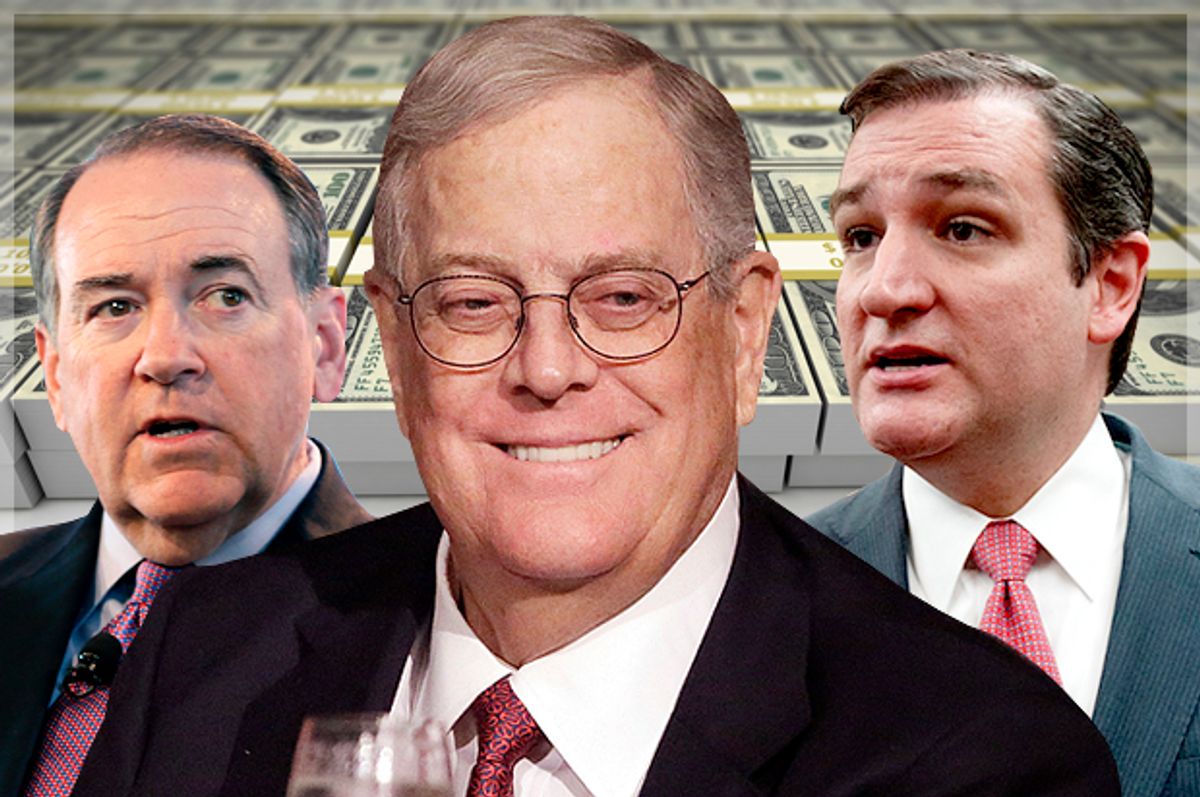 Though presidential hopeful Ted Cruz was apparently a top student at Harvard Law, he has always been quick to distance himself from the organization, especially since the despised Barack Obama went to the same school less then a decade earlier. Back in 2013, at a conference sponsored by the Koch brothers, he said that “[Obama] would have made a perfect president of Harvard Law School."

"There were fewer declared Republicans in the faculty when we were there than Communists! There was one Republican. But there were twelve who would say they were Marxists who believed in the Communists overthrowing the United States government.”

This claim was discredited by Harvard Law, but it certainly cannot come as a surprise that Cruz wants to distance himself from an academic organization that is generally thought of as liberal. His voter base, after all, is not a particularly highbrow community.

With the Republican primaries ramping up, there will surely be a great deal of anti-intellectual musing coming from each candidate. There will be talk of how those elitist “harvard faculty” members are disconnected from the common people up in their ivory tower, and how they just don’t understand the real America. Mike Huckabee, who is expected to run for president, summarized this view on “The Daily Show” earlier this year: “Theres a real disconnect between people that live in the bubbles of New York, Washington, and Hollywood, versus the people who live in the land of the bubba’s...theres a big difference between people who are well educated and people who are smart.”

It is a view that has been espoused many times before here in America, similarly provided once by the crooked Tammany Hall politician George W. Plunkitt in response to calls for reform: “Some young men think they can learn how to be successful in politics from books, and they cram their heads with all sorts of college rot. They couldn’t make a bigger mistake... I guess [colleges will] have to exist as long as there’s bookworms...but they don’t count in politics.”

Indeed, anti-intellectualism has quite a storied history here in America -- from evangelical preachers of the 19th century like Billy Sunday saying “college graduates are going as fast as they can straight to hell,” to Joseph McCarthy smearing every left-wing intellectual he could find. When it comes to alienating and demonizing thinking individuals, Christian’s and conservatives have always lead the way. And in the modern Republican party, anti-intellectualism has long been a common theme.

America’s culture of anti-intellectualism can be traced back to the mid-18th century, when a schism occurred within puritan colonies. Originally, the puritans were very supportive of intellectuals, and founded top universities like Harvard and Yale. The 19th century Professor of American history, Moses Coit Tyler, wrote about Puritan intellectualism: “In its inception, New England was not an agricultural community, nor a manufacturing community, nor a trading community: it was a thinking community; an arena and mart for ideas; its characteristic organ being not the hand, nor the heart, nor the pocket, but the brain.” In the mid-18th century, however, what would later be coined “the great awakening” spread across colonies, and then to the west and south. Religious leaders began preaching with greater zeal and spontaneity, trying to reach out to the poor and uneducated masses. Certain denominations, particularly the Methodist and Baptist Churches, emphasized recruiting the common people, and therefore grew rapidly. In embracing the common people, the churches also embraced a kind of hostility towards eastern elites and intellectuals.

During the 19th and 20th centuries, certain evangelical preachers, such as Dwight L. Moody and Billy Sunday, gained a mass of followers, as well as large fortunes, from their aggressively anti-intellectual and anti-modernity sermons. “I do not read any book, unless it will help me understand the book,” said Moody, “I would rather have zeal without knowledge; and their is a good deal of knowledge without zeal.” The even more belligerent Sunday represented a kind of perversion of Christianity that would later become quite common within the religious right. Sunday had become a millionaire from his preachings, and was always quick to defend his private gain as a very Christian thing to do, once preaching that “The Bible doesn’t condemn any man because of his wealth... According to our standard of gold and silver, Abraham was worth a billion and a half dollars, David was worth three billion, Solomon was worth five billion. Solomon could’ve hired Andrew Carnegie for a butler, J. Pierpoint Morgan to cut his lawn, and Andrew Mellon for a chauffeur, and John D. to black his boots.”

This base synthesis of anti-intellectual evangelicalism and self-interested money making that Sunday preached was a precursor to the monstrous alliance between the religious right and business conservatives that we have today. From the New Deal era up to the Reagan years, the anti-intellectualist right was mostly focused on defeating communism, as seen with individuals like Joseph McCarthy and organizations like the John Birch Society. But the true synthesis of Christianity and business in modern politics came with Jerry Falwell’s “moral majority” and the election of Ronald Reagan. Falwell’s evangelical movement was focused mainly on social issues like abortion, homosexuality, and civil rights. Reagan wholly supported these social issues, but he was also a business conservative, whose economic philosophy was influenced by the likes of Milton Friedman and F.A. Hayek. As a spokesman for General Electric, Reagan had become entirely convinced of the free market’s supremacy, and in a sense, believed that what was good for GM, or in this case GE, was good for America.

Today, the Republican party still supports these basic social and economic ideals. But the social issues are what truly gain votes, and they inevitably result in a hostility towards intellectualism and science. Many of Republicans seemingly vote against their economic self-interest in support of the conservative social values, which results in a vicious cycle of ignorance and poverty. Social conservative views, whether it be abortion or homosexuality, all sprout from the Christian faith, and the Christian faith inevitably clashes with modernity and science.

We see it around the country, with schools teaching creationism and politicians denying man-made climate change. In states like Texas, Louisiana, and Tennessee, public school teachers are allowed to teach “alternatives” to evolution, while in the states Florida, Indiana, Arizona, Ohio, Washington, and elsewhere, taxpayer money goes to funding private creationist schools. Evolution is quite incompatible with biblical stories, and the lack of scientific education in many states shows itself in polls -- according to Gallup, 42 percent of Americans believe that God created humans in the present form.

The denial of climate change is another major outcome of Americas cultural hostility towards intellectuals and experts. The scientific consensus of man-made climate change is as good as it gets: 97 percent of climate scientists agree. And yet, politicians and much of the populace simply do not trust the experts. According to a 2014 poll done by the Public Religion Research Institute, about 26 percent of Americans believe there is no solid evidence for climate change, and the most frequently cited reason for this belief was that they have not “noticed any change in the weather around them.” This popular view is clearly reflected by certain politicians, like the Chairman of the Senate Environment Committee Jim Inhofe, who vehemently denies climate change and says things like, “the hoax is that there are some people who are so arrogant to think that they are so powerful, they can change climate. Man can't change climate.”

Clearly, this hostility towards science and intellectualism is ingrained within much of the country -- and now, with the Republican primaries heating up, a carnival of clownish windbags will be competing with each other to prove who is the most hostile towards science and education, and boy will it be close.

Ted Cruz has already made it quite clear that, although he went to Harvard, he is as anti-intellectual as they come; embracing conspiracy theories and comparing the climate change consensus to the theological consensus of the geocentric model during the time of Galileo. Cruz has been adamantly opposed to the entire idea of climate change, and was recently named to be Chairman of the Subcommittee on Space, Science, and Competitiveness. Aside from promoting the conspiracy theory that Harvard law is a communist organization, he has promoted other conspiracies that are outright loony, like saying the George Soros was leading a global movement to abolish the game of golf.

Marco Rubio is also hostile to anything contradicting his faith, including climate change,  while the leading contender for Republican nomination, Scott Walker, has taken the fight directly to academia, calling for major cuts in public university funding in Wisconsin that would add up to about $300 million over two years. He also just fired 57employees from Wisconsin’s Department of Natural Resources this past Earth Day. Predictably, he doesn’t believe climate change is a big issue either, and possibly has the worst record on environment out of all of the candidates.

And so the Republican primaries will be full of the usual evangelical type preaching, damning abortion and calling their Democratic contenders “elitist” snobs, while brushing off those so-called “expert” climate scientists and their warnings. But you can only blame the politicians so much. When it comes down to it, this is simply what a big part of the population expects from their leaders -- religious buffoons who embrace a paranoid style of politics; where experts and academics are looked down upon as disconnected and deceitful, and where faith in Jesus and the Bible is the ultimate guiding light. Where one is expected to go with their gut rather than their head, and where “professorial” is an insult. Anti-intellectualism is an American tradition, and these new contenders denying scientific facts and calling Harvard a communist institution are simply embracing a populace that individuals like Billy Sunday and Joseph McCarthy once embraced. The alliance of religion and big business has fully incorporated America’s unfortunate anti-intellectualist culture, which has resulted in millions of people voting against their interest because of their own ignorant hostility towards anything that could be deemed elitist. It is a cycle of ignorance and poverty, and it is exactly what the real elites, like billionaire oil men, aim for.

The American writer, Issac Asimov, once said, “Anti-intellectualism has been a constant thread winding its way through our political and cultural life, nurtured by the false notion that democracy means that ‘my ignorance is just as good as your knowledge.’” Unfortunately, this thread has continued to this day, and individuals like Ted Cruz and Scott Walker are here to remind us that ignorance can be quite competitive with knowledge, as long as there’s money behind it.