Far too many onlookers are happy to dismiss the anger in Baltimore in insulting and paternalistic terms. But why? 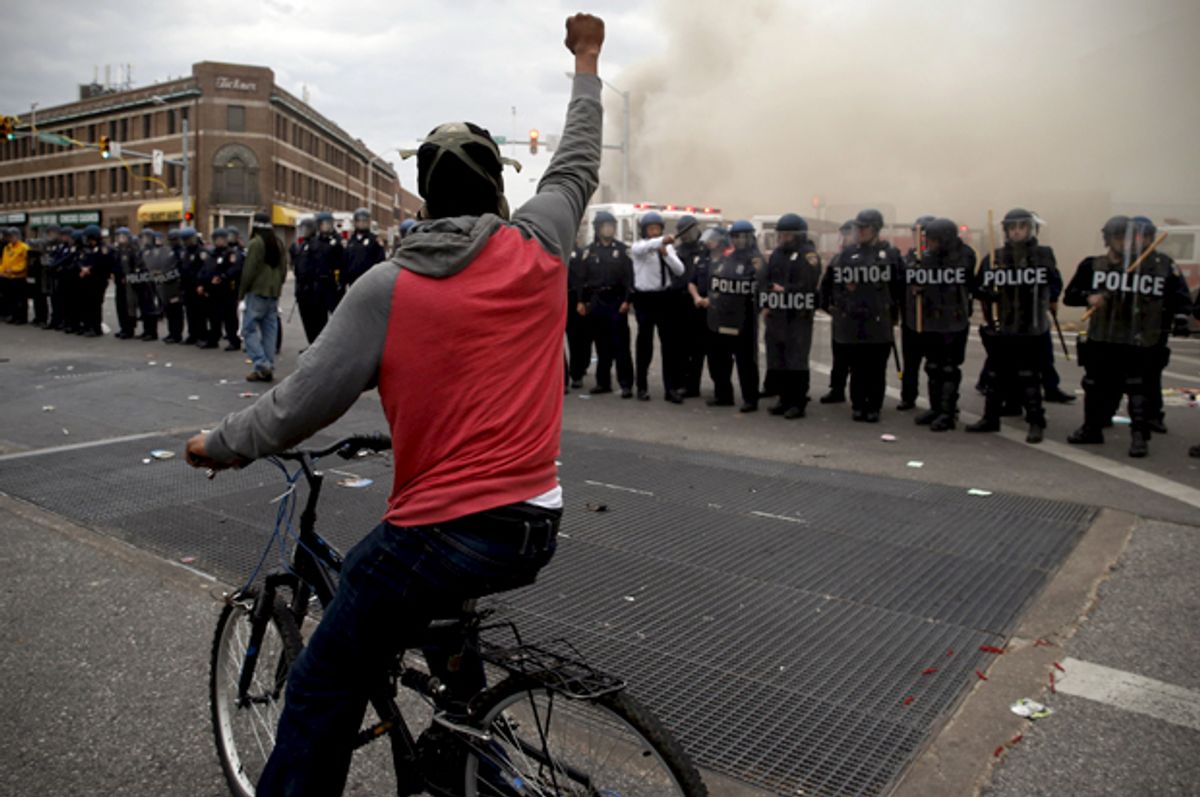 A protestor faces a line of police during clashes in Baltimore, Maryland April 27, 2015. (Reuters/Jim Bourg)
--

On Monday, April 27, 2015, ABC News captured video purporting to show an African-American mother disciplining her son for participating in unrest that erupted in Baltimore following the killing of Freddie Gray. As the story goes, the mother saw her son on television throwing rocks at police and subsequently went to retrieve him. In the video, she can be seen trying to take off his mask, and then hitting him several times on the side of the head. A careful and sympathetic listener will hear the distress in her voice when she can be heard yelling at him: "Do you want to be Tased?"

Since being posted, this video has gone viral, having already been viewed more than 18 million times in one Facebook post alone. ABC News has praised the mother’s "parenting style,” breathlessly reporting that “she chases the adolescent around, slapping him and giving him a profanity-laced lecture that rioting is not OK.” Tweet after tweet has lauded the woman as “Mom of the Year,” an appellation that Jim Swift, assistant editor at the conservative Weekly Standard, first bestowed on Monday night. The line was later echoed by other conservative websites, following a larger right-wing narrative that framed the riots as the result of misbehaving children. The real problem, such thinking suggests, is a generalized lack of discipline stemming from disorderly families.

All of this praise, especially when coming from a predominantly white audience, feels like little more than a way to condemn the black mothers who failed to instill "respectability" in their children. As one Twitter user asked Monday night: “Where are the rest of their parents?” To another, the woman in the video served as proof that “not all black people are this damn stupid.” These observers are trying to explain why black Baltimoreans are rioting -- by paternalistically insisting that their parents didn’t raise them right.

On the other hand, within the African-American community, this sort of language is deeply informed by a politics of respectability, which has long served as a cultural means of self-defense, meant to deflect racist stereotypes of black criminality and depravity that serve to justify violence and exclusion. It’s about trying not to be a target. You can hear this anxiety in the mother’s voice: “Do you want to be Tased?” Given the sheer quantity of arms that the police have brought onto the streets of Baltimore in the last few days, this is no idle concern.

However, respectability politics also gives observers permission to ignore the underlying causes of the Baltimore riots. Speaking of the Baltimore unrest more broadly on Monday night, Fox News commentator Joe Hicks accused protesters of possessing “an almost infantile urge to get what they want and get it now.” Hicks refused to even acknowledge that these protests have any broader message, or any legitimate concern, claiming that historic civil rights leaders such as Martin Luther King Jr. would be "spinning in their graves to hear people describing this as some sort of movement.”

The language of respectability often serves to marginalize unruly expressions of dissent and maintain cordial relationships between black and white communities, even as those communities are divided by stark and systematic inequalities of wealth and power. This is reflected in recent exhortations to black Baltimoreans that they remain nonviolent, and characterizing Baltimore’s rioters as little more than “thugs.” Such admonitions are often well-intentioned, but they are also fundamentally misguided.

Dr. King himself famously once said that a riot is "the language of the unheard." However, to truly hear that language would mean accepting that teenagers smashing windows and setting police cars alight have voices worth listening to. It would require acknowledging the fundamental human equality of so-called thugs alongside lawyers and doctors. By rejecting a more expansive understanding of equality, these calls for respectability simply serve as a way to suppress these voices and ignore the messages they send.

Nonviolence has long been a powerful tactic for social justice, but it's important to remember that it has only worked to the extent it could force change to occur. Fundamentally, nonviolent direct action is a coercive political strategy. Somewhat like a riot, it creates a crisis so disruptive that those with the power to effect real change are compelled to act.

The organizers of the civil rights era did not win their victories because they convinced white supremacists that their racism was wrong through polite and respectable conversation; rather, they were able to force the federal government to act against these white supremacists by embarrassing the United States in the eyes of a rapidly decolonizing world. After World War II hastened the fragmentation of the great European empires, leaders of newly independent and non-white third-world nations negotiated their diplomatic position between the United States and the Soviet Union. They watched very carefully how Presidents Eisenhower, Kennedy and Johnson responded to African-American demands to end Jim Crow. The nonviolent dramas of Birmingham and Selma played out on an international stage. This was what gave nonviolent direct action the power to effect change on a broad scale.

But now, outside of the Cold War context that made nonviolent direct action so effective, where is the leverage?

When President Barack Obama claims, as he did today, that “this is a problem that the federal government is not going to be able to solve,” how else are these voices going to make themselves heard? What is there to compel the government to effectively address the epidemic of police violence -- often done with the tacit promise of impunity -- directed against black men and women? How are we to reverse the disinvestment from and deindustrialization of black communities like Baltimore? How do we raise the wages of the black working class in the aftermath of Reagan’s assault on the labor movement? What of the legacy of the systematic exclusion of African-Americans from the full benefits of the New Deal-era welfare state? How do we halt the rapid expansion of mass incarceration that jails a disproportionate number of young black people?

These are the questions that have been raised by every protest since African-Americans in Ferguson refused to let Michael Brown’s murder go unchallenged. Rather than using the language of non-violence to dismiss the riots as little more than childish, inarticulate rage, it’s time to listen up.

Baltimore has something to say.

Jay Driskell is assistant professor of U.S. history at Hood College in Frederick, Maryland. He is the author of “Schooling Jim Crow: The Fight for Atlanta’s Booker T. Washington High School and the Roots of Black Protest Politics.”