Ronald Reagan perfected the use of coded racial language to court white voters. His strategy persists to this day 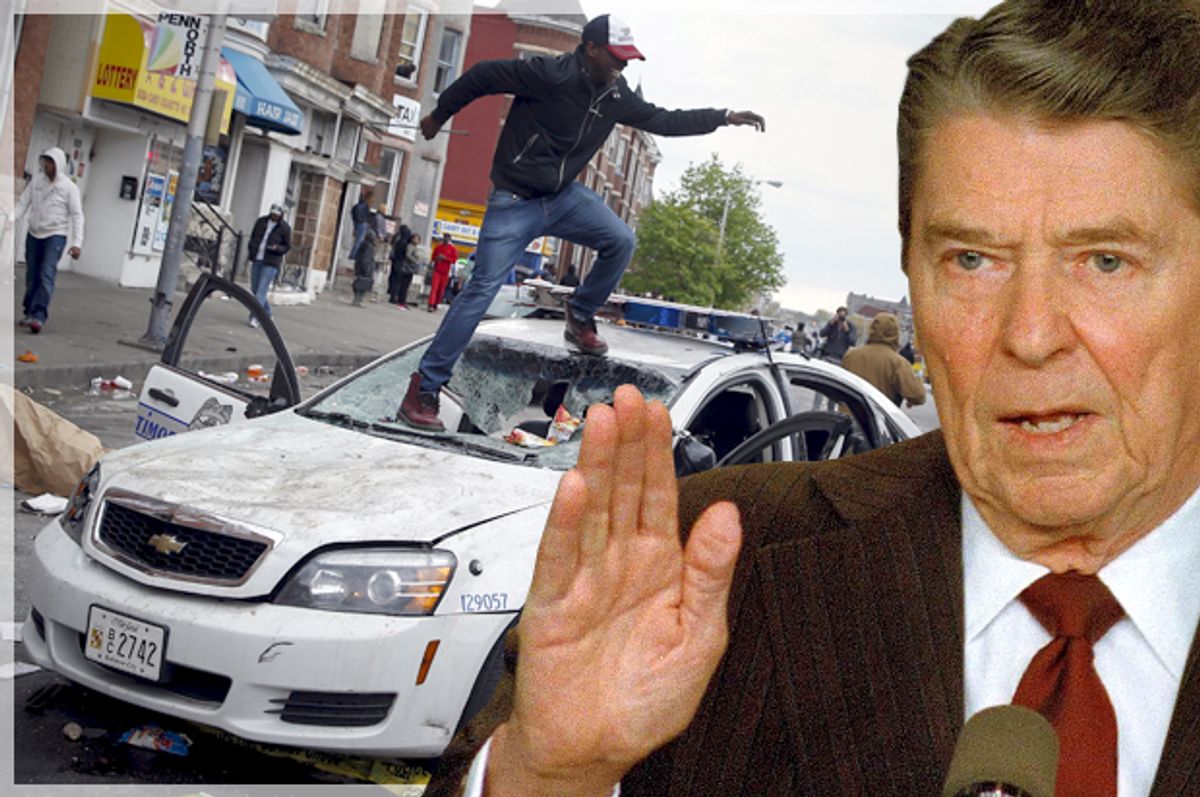 "Liberals won't get angry about the #BaltimoreRiots unless the rioters start carrying off loot in untaxed plastic bags." So said Rep. Steve Stockman, R- Texas, in response to the violence in Baltimore last night.

What is perhaps most striking about this type of language, in ample display over the last several hours, is just how layered much of it is in language that subtly dehumanizes and pathologizes the black Baltimore residents who have come out to protest the death of Freddie Gray, who was killed in police custody earlier this month.

Similar sentiments have bubbled up every time black citizens have come out to protest abuses by police: "Thugs." "Animals." "Savages." The GOP's base of white working-class Americans seem highly responsive to such messages from their conservative elected officials. This in spite of the fact that, if they looked around, they might discover that they have more in common with the protesters they disparage than they do with the wealthy politicians they keep voting into office.

It is a paradox that has long plagued American politics: Why do so many working-class people, many of whom live in poverty, vote against their own economic interests. It would be too simplistic to ascribe this phenomenon wholly to social issues such as gay marriage, as many do, when in reality it is much more complex. A great deal of it has to do with the “quiet racism” that the Republican Party has embraced since the 1960s, as well as an aggressive wave of anti-government and free-market propaganda that grew out of the stagflation crisis of the 1970s.

The advent of dogwhistle politics

Back in 1980, during the final months of his presidential campaign, Ronald Reagan gave a controversial speech at Neshoba County Fair, which is just a few miles from Philadelphia, Mississippi, where 16 years earlier three civil rights workers were murdered by members of the Ku Klux Klan. In Reagan’s speech, he focused mainly on “states' rights,” which many critics describe as a subtle reference to Southern racism and the disdain for federal laws that had been implemented during the civil rights movement to protect African-American citizens.

Though Reagan was a small-government guy, the choice of venue for this states' rights speech could not have been any more symbolic. Southern states had been Democratic strongholds since the Civil War, and this was a gesture that embraced their rights against the federal government and the new school of Democrats who had in a sense turned on them during the civil rights era. In the same year as the Neshoba County Fair killings, the Civil Rights Act of 1964 was passed, which ordered an end to racial segregation through federal law, creating a distrust of federal government that continues to this day.

This hostility toward the federal government, and the calls for states’ rights that came along with it, could be traced all the way back to the antebellum era, when defenders of slavery promoted it as a states issue that the federal government had no right to interfere with. Then, in the 1960s, the idea experienced a political resurgence, as a reaction to the civil rights movement. In 1963, when the federal courts ordered the integration of the University of Alabama, George Wallace famously responded by saying, “I do hereby denounce and forbid this illegal and unwarranted action by the Central Government.” Wallace perfected the coded language of “dogwhistle” politics that the Republican Party would later use to capture the Southern states --the vaunted “Southern strategy” that would culminate in Richard Nixon's landslide reelection in 1972.

But it was in 1964, with Barry Goldwater’s campaign for president, that the Southern strategy truly began. President Lyndon B. Johnson, who was a Southern Democrat, had embraced the civil rights movement, which had alienated the majority of Southerners, and given the Republicans an opportunity to capture a region that had long been a Democratic stronghold. With this shift, the GOP very consciously made a decision to become the “white man's party.”

Goldwater aggressively promoted the same states’ rights as Reagan would 15 years later, as well as an anti-New Deal platform -- even though the Southern states had always been its ardent defenders. Goldwater lost in a landslide, but he did manage to get formerly Democratic Southerners to vote Republican with his coded racism. Before then, Southern states would have never voted for an anti-New Deal politician; Goldwater's race baiting overcame his less palatable libertarian ideals, and the conservative movement was born.

Modern conservatism was built on this form of politics, using coded language that embraced Southern racism and turned the region solidly Republican. Reagan attacked the New Deal government that the South had once embraced by painting a very negative and racist picture, telling hyperbolic stories about “Cadillac-driving welfare queens” and “strapping young bucks’ buying T-bone steaks with food stamps.” This powerful stereotype remains to this day, and helped create the anti-government position that has since flourished in Southern states and the Republican Party.

In a candid and originally anonymous interview, Reagan’s 1984 campaign director Lee Atwater described the Southern strategy in shockingly racist terms: “You start out in 1954 by saying, 'N***er, n***er, n***er,'" said Atwater. “[But] by 1968 you can’t say 'n***er' — that hurts you. Backfires. So you say stuff like forced busing, states’ rights and all that stuff. You’re getting so abstract now, you’re talking about cutting taxes, and all these things you’re talking about are totally economic things and a byproduct of them is, blacks get hurt worse than whites.”

Around the same time as this rise of racially fueled politics, an outbreak of free-market and limited government propaganda spread through the nation's airwaves. During the 1970s, the economy had taken a turn for the worse, and certain economists like Milton Friedman and F.A. Hayek used this fact to aggressively promote the neoliberal agenda. The stagflation and energy crises of the '70s had hurt many people; it seemed as though the Keynesian economy had failed, and that a turn toward a freer market would provide a solution.

And so Reagan ran on a limited-government, states’ rights platform. Many people at that time were convinced that supply-side economics was a legitimate theory, and that letting the market work its magic would benefit all. It was a sort of resurrection of the invisible hand. The right wing aggressively attacked unions and high level of income taxes for the wealthy. Much of the population supported Reagan without realizing how opposed his ideals were to their own self-interests.

The Professional Air Traffic Controllers Organization (PATCO) was one of the organizations that supported Ronald Reagan in the 1980 election, which it would later regret when he attacked it head-on. After PATCO declared a strike in 1981, Reagan fired 11,000 workers and brought in Military Air Traffic Controllers as their replacements, an unprecedented move and the beginning of the end for union relevance in the United States.

Nonetheless, Reagan and the Republicans convinced a great percentage of working-class Americans that the GOP deserved their vote.

Today, the myth of supply-side economics has proven a complete failure, with endemic and rising levels of income inequality; but the issue of whether to tax the wealthy at a higher rate remains a deeply partisan issue. Even for many working-class people who could never in their dreams hope to earn more than $250,000 per year, higher taxes on the rich are thought of as a sort of socialist plot. The redistribution of wealth is a dirty term, and anyone who believes in increased government regulation is branded a communist.

This divide is evinced most clearly by the media. Fox News propagates the zero-sum view that higher taxation and interference with the market is a form of socialism that will crater the economy; conservatives, meanwhile, are much more loyal to Fox than liberals are to any particular institution on the left. When so many people get all of their information from one organization, then no doubt a myopic view of the world will be reflected.

The Southern strategy has been a massive success for the GOP. Today, some of the most conservative states are in the South, where poverty nonetheless runs rampant. Ultimately, this stronghold was built on the racial prejudices of many citizens, which overcame their support for the New Deal government.

Some of the poorest states, like Louisiana, Mississippi, Georgia, Kentucky, Alabama and South Carolina, are also some of the most conservative and racially divided states. In fact, Mississippi may be the best example of citizens motivated by prejudice voting against their economic interests. While its residents would probably benefit most from the Affordable Care Act, the government has been aggressively against it from the beginning. Gov. Phil Bryant refused to create a state-run insurance exchange and refused the Medicaid expansion, which left about 138,000 mostly black residents with no insurance at all. As we saw with Reagan’s Neshoba County Fair speech, Mississippi politics are extremely divided and fueled by race. Bryant objects to federal programs that would help his citizens in the name of states’ rights, which as we saw with the Reagan campaign is very much a coded term.

In early polling conducted last year, Bryant was a double-digit favorite for reelection over prospective Democratic opponents in 2016.

Obviously there are many reasons for poverty, but the fact that the states with the greatest amount of it also have political leaders who refuse to expand Medicaid is no coincidence. Ever Since the civil rights era, the Republican Party has taken advantage of America’s unfortunate history of racism, while also popularizing a strong distrust of the federal government, and this has resulted in the strange paradox that we see today of people voting for candidates who will in no way help them.

Throw in this subtle racism with social issues like abortion, and many people will vote for the candidates who preach conservative "values," regardless what their economic policies encompass. For others, who may be less concerned with social issues, the fear of government has become reason enough to vote against the so-called statist Democrats. Unfortunately, much of the populace has been convinced to vote for leaders who are ultimately bought and paid for by billionaires and corporations, but aggressively promote a social ideology that they prefer. In many of these states, where fear-mongering and paranoia are boisterous, individuals would rather vote for billionaire-backed politicians than the ones who support a federal government that forced them to desegregate their schools and legalize abortion.

And so the Republican Party has built much of its base on a vicious cycle of poverty and prejudice -- keeping their constituents poor and ignorant with regressive economic policies, but earning their trust by preaching moral values that the big bad federal government wants to interfere with. The hatred that has been expressed for our first black president has revealed that racism is not a thing of the past, and that it is still a very effective way to divide and conquer. Rather than having a strong and united working class fighting for their fair share, it is completely separated by issues of race and morality. It should come as no surprise, then, that since the rise of this Southern strategy, the country has become more and more unequal.

Today, inequality is at its highest since the Great Depression, and the middle class has been hollowed out. So, in a sense, the Republican strategy has worked. The middle class was divided by fear-mongering and racism, and today it has been conquered by plutocracy. In embracing America’s dark and racist past, the 1 percent has turned the United States government into a quasi-oligarchy -- and as long as the middle class remains divided by issues of race and fear, the United States will indeed become the dystopia that Charles and David Koch so solemnly dream of at night.