I'm going to climate denial school: My first week inside the science of anti-science

A new online course takes on the climate deniers. Here's what I learned in Week One 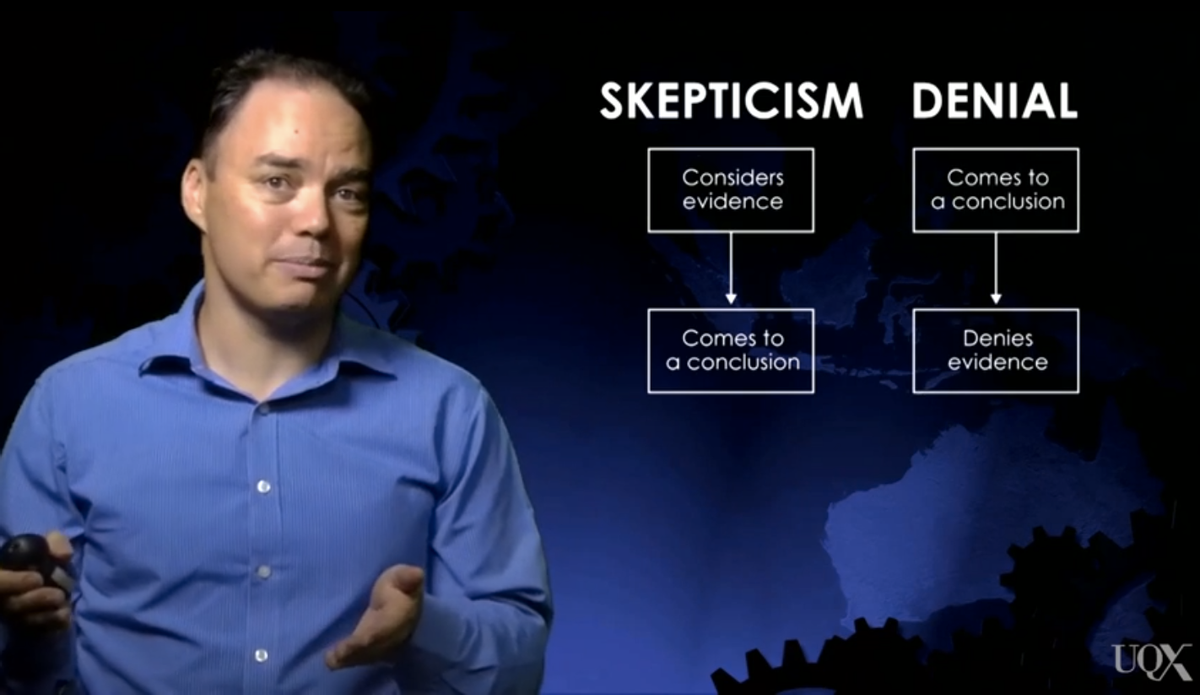 Tuesday, for me and some ten thousand classmates, was the first day of climate denial school.

Or, should I say, anti-climate denial school. We'd all signed up for Denial101x, a new, six-week MOOC (that's "massive open online course," for all you education luddites) aimed at making sense of this whole phenomenon -- and at giving us the tools to fight deniers, so that we can all get on with fighting climate change itself.

Our professor is John Cook, the Climate Communication Fellow for the Global Change Institute at the University of Queensland and the founder of Skeptical Science, which over the past two years has been an invaluable resource for me, a newbie debunker of deniers.

Of course, there's always more to learn. As a student, Cook told me via email, I can expect to leave the course with "a better understanding what’s happening to our climate, able to identify the techniques used to distort the science and be able to debunk misinformation." That's a great thing for a climate blogger, as well as -- and this is really the point -- for any concerned citizen of the world who wants to understand the truth about climate science for themselves.

The course doesn't waste time wringing its hands over whether or not to call deniers "deniers" -- a true skeptic, Cook explains in his welcome video, "doesn't come to a conclusion until they've considered the evidence," while "someone who denies well-established science comes to a conclusion first, and then discounts any evidence that conflicts with their beliefs." But it is interested in why climate deniers believe the things they do. That's because in order to effectively debunk climate denier myths, Cook told me, it's important first to understand the psychology behind them -- and to understand how and why they're so good at casting doubt on the scientific consensus.

That, incidentally, was the theme of our first lesson. I'd recommend anyone who's interested to sign up for themselves (it's free, and only requires one to two hours of your time for its six-week run), but here are a few highlights from day one:

-The "scientific consensus" is a term that's bandied around a lot as a shortcut for shooting down deniers, but it's even more well-established than many perhaps realize. After three short videos describing the consensus of evidence, scientists and papers, guest lecturer Peter Jacobs, a graduate student in Environmental Science and Policy at George Mason University, explains how we know when a consensus is truly knowledge-based. It needs, he explains, to meet three conditions: a consilience of evidence, meaning different, independent lines of evidence all pointing toward the same conclusion; social calibration, meaning everyone establishing that evidence relies on the same basic concepts, like global temperature, and uses the same, rigorous scientific method; and social diversity, meaning that different groups, from different backgrounds, are all on the same page. Can you guess which "controversial" scientific theory meets all of those conditions?

-People don't just wake up one day and decide to deny the scientific consensus on climate change. There's actually some pretty strong psychology behind their anti-science beliefs, and a lot of it has to do with the way their political ideology informs their worldview, and thus their understanding of the facts themselves.

But politics aside, the University of Victoria's Robert Gifford explains, our brains just didn't evolve to grapple with long-term, global threats like climate change. And so a number of psychological barriers, or what he calls "dragons of inactions," prevent us from responding in a way that's commensurate to the problem: we tend to discount events that seem far away, for instance, and we tend to be overly optimistic about the risks of climate change while at the same time deeply pessimistic about our individual ability to make a difference. And then, there's the whole matter of the "consensus gap": the difference between the 97 percent scientific consensus, and where the public believes it is -- somewhere around 50 to 60 percent. How great people believe the consensus is has a big influence on their other beliefs, like whether the support the need for climate action. And according to Gifford's own experiments, the more Americans support "free, unregulated markets," the larger the consensus gap.

Here's more from Cook on how science denial comes about in practice:

-I've written extensively about the vicious ways in which deniers and so-called merchants of doubt attack climate science, through persuading the media to present a false balance, going after scientists, undermining that solid scientific consensus and other tricks of the type that this course aims to expose. It can get ugly:

In his lecture, Cook emphasizes that those attacks don't just impact public perceptions and hurt scientists' feelings -- they have an effect on how the scientific community presents its research. Consensus agreements like those from the U.N. IPCC, for instance, likely underestimate the impacts of climate change. I've written before about how the IPCC is underselling its message, but Cook ties that phenomenon back to the corrosive influence of climate deniers: "Predictions of alarming climate impacts are vigorously pounced upon by critics," he argues, "whereas harmless predictions are met without hostility. The result is a tendency to underestimate the impacts of climate change, in order to avoid a hostile response."

Next week: Climate denier myths -- why they're wrong, and how deniers manage to make them sound so convincing.