Woody Allen's at it again: He gets older, his ingénues stay the same age 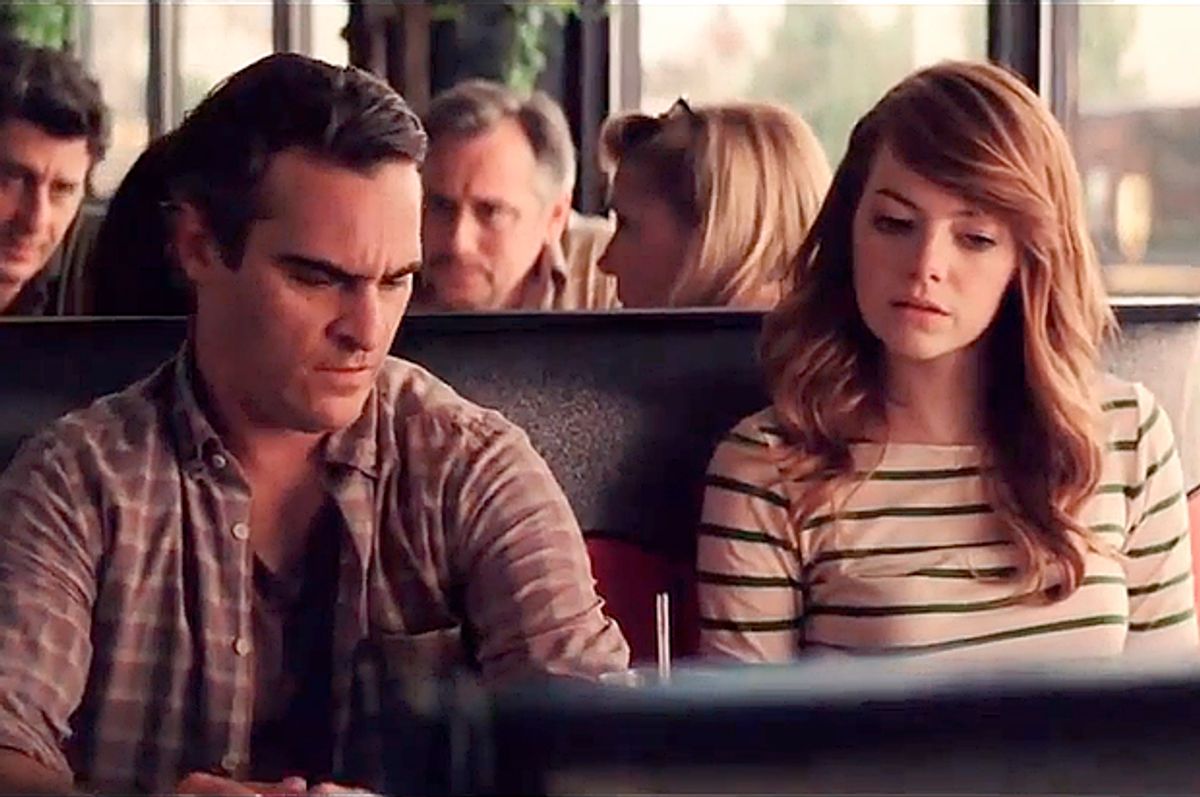 One of the great lines in contemporary American film comes from Matthew McConaughey’s character, Wooderson, from “Dazed and Confused.” Wooderson is a slow-drawlin’, hot-rod-driving’ Aerosmith-loving guy in his 20s who hangs out in places like pool halls and parking lots where teenagers congregate. “That's what I love about these high school girls, man,” he says at one point. “I get older, they stay the same age.”

It’s not hard to think about Wooderson as the trailer from the new Woody Allen film, “Irrational Man” drops this week. (The movie comes out in July.) The film, shot mostly in and around Newport, Rhode Island, looks at a troubled but, it seems, darkly charismatic philosophy professor named Abe Lucas. The latest actor to play what’s hard not to see as the young-Woody role – a list that’s included John Cusack and Owen Wilson – is Joaquin Phoenix. Abe arrives at a new campus with a complex reputation. (“That should put some Viagra into the philosophy department,” we hear a woman saying as Duke Ellington’s “It Don’t Mean a Thing” plays.)

If Allen is aware of the criticism of him for marrying his sort-of step-daughter, the charges of sexually molesting Dylan Farrow, or casting himself as the romantic lead against teenagers (see “Manhattan,” in which his character is 42 and Mariel Hemingway’s is 17) he’s not quite hearing it. Because “Irrational Man” is another neurotic-older-man-saved-by-sex-with-a-much younger-woman film. From the trailer, it looks like it might also be a smart, well-acted movie. But from what we can tell from a few minutes of footage, Allen seems to be either flipping the bird to his critics, trying to explain and justify his pattern of creepy behavior, or some combination of the two.

So back to Abe. He’s a classic Allen protagonist: Intellectually gifted, existentially drifting, and apparently, in this case, alcoholic and at least partly impotent as well. He seems to be getting some action soon after arriving on campus, from still-winsome indie queen Parker Posey; in what may be a first for Allen’s films, the 46-year-old Posey is older than the 40 year-old Phoenix. But – bet you didn’t see this coming – before long, the professor is telling his student, played by Emma Stone, “your paper was quite good,” they are flirting/dining/in bed together, and his mojo – sexual, intellectual, professional – suddenly returns. Laying an undergraduate, it seems, has become (as he later declaims in a restaurant) “the meaningful act I’ve been searching for!” (Stone, for what it’s worth, is 26, and the age difference of 14 years between pursuer and pursued may be below the median for the director.)

Now, for love and sex to bring a man (or woman) a renewal of purpose is hardly something Allen invented. The image of a middle-aged man finding purpose in his search for an idealized woman dates back to Dante and before; we would probably not have Western culture without it. It’s also an image you see in the films of his hero, Ingmar Bergman. But given his track record, you’d think Allen would either find a way to stop extending this trope or come up with a way to make a bit less creepy.

We’ve not seen the movie, and it may all make more sense at full length. (Even "Manhattan," if you can forget everything you know about the director’s personal life, remains a beautifully shot, fully realized work of cinema.) So far, though, it’s made us recall that the best recent Allen film -- and the one with real depth of character, believable relationships, top-notch performances and a moral center -- was the one with a forty-something female lead. Cate Blanchett, who rightly won an Oscar for 2013’s “Blue Jasmine” portraying the addled wife of a finance-industry swindler, was beautiful, convincing, and a touch crazy. As she prepares to turn 46 next month, Blanchett is moving into the age at which Allen – and, alas, many hack Hollywood directors of the sort this New York-based intellectual has defined himself against – believe to be suited only to the male lead’s ex-wife or the female equivalent of a cuckold.

It’s always a trap to read a work of art too closely around the artist: it’s the song, not the singer, in the end. But Allen almost seems to be begging for us to get them all tied up. Too many of his movies – “Blue Jasmine” excepted – help explain why he abandoned Mia Farrow for someone a third his age.