The GOPer has an odd celebration for the medically unnecessary law that could cost the state upwards of $450,000 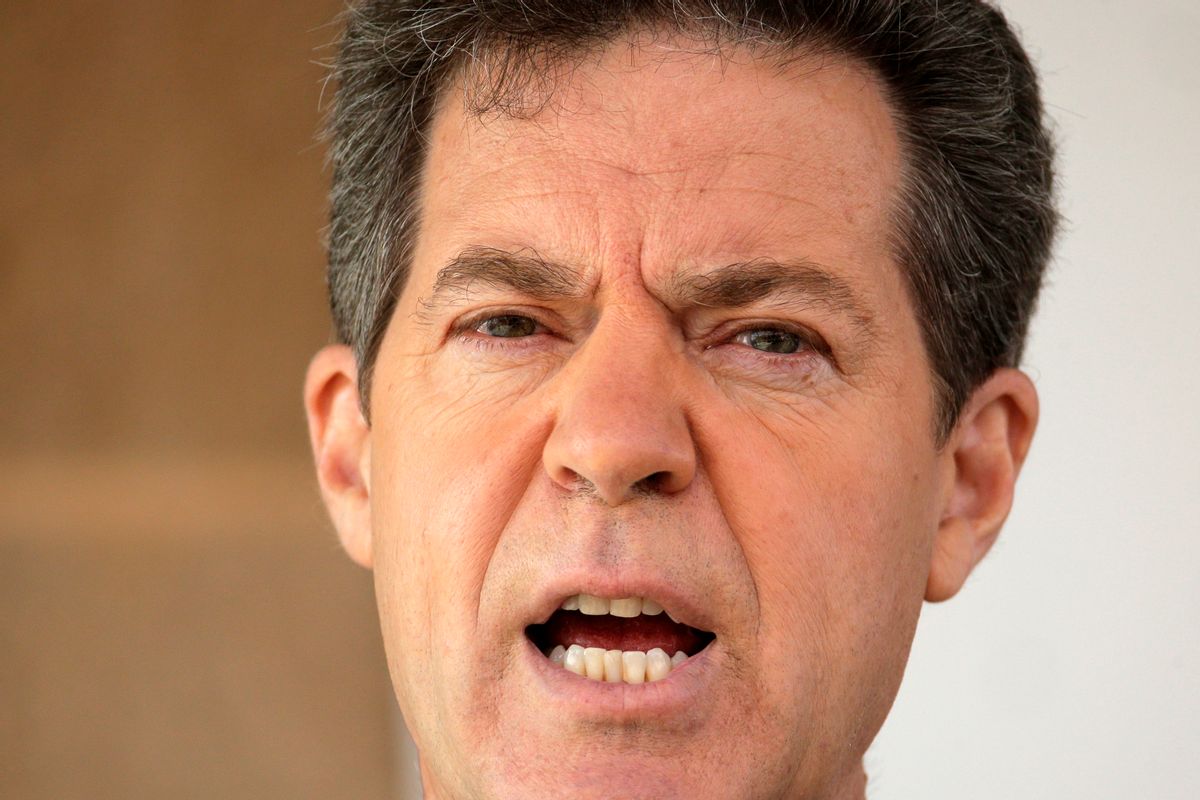 I have to hand it to Gov. Sam Brownback: The Kansas Republican's transition to a Caligula-inspired style of leadership during his second term has been a fascinating train wreck to watch.

In addition to directing the state to a massive budget shortfall, the governor has also signed some of the most restrictive antiabortion legislation in the country -- including the nation's first-ever ban on "dilation & evacuation" (D&E) abortion, which could effectively prohibit doctors from providing appropriate care for their patients. And now, Brownback has found a bizarre new way to celebrate the anti-choice law and create a public spectacle.

On Tuesday, the governor set out on a four-city tour to reenact his signing of SB 95, which happened during a closed-door ceremony earlier this month. Unlike the official signing, at which Brownback was flanked by blown-up images of developing fetuses and anti-choice activists, this week's reenactment ceremonies were made open to the public -- especially to students at the three Catholic high schools and Catholic church education building Brownback visited, according to Think Progress.

"I am profoundly disappointed that Governor Brownback has chosen to hold a publicity tour for this reprehensible law," Julie Burkhart, a Kansas abortion provider and founder of the political action committee Trust Women, said. "Reenacting this bill signing in front of children is not only a publicity stunt, but also spreads hate and disrespect."

The law identifies D&E as “dismemberment” abortion, which is neither a medical term nor an easy phrase to stomach. That’s not accidental. Brownback’s anti-choice peers at National Right to Life — which spearheaded the Kansas restrictions and similar measures in states such as Oklahoma — have approached D&E bans as antiabortion activists once approached restrictions on “intact dilation & extraction” (D&X), otherwise known as “partial-birth abortion.”

And anti-choice organizations have found exceptional (and exceptionally menacing) allies in Brownback and Kansas attorney general Derek Schmidt, who just this week requested nearly half a million dollars in taxpayer money to defend SB 95 in court. Kansas is already among the top five states to spend exorbitant sums defending its antiabortion laws, and has spent more than $1 million in legal defense funding over the past three years alone — all to enforce restrictions that are, overwhelmingly, medically unnecessary and potentially life-threatening.

Of course, that’s not how Brownback is portraying the newest measure as he embarks on his anti-choice publicity tour for teens. It’s interesting to note that some of the governor’s most troubling tax cuts have been directed at education spending, while he continues to endorse antiabortion defense spending that is, in the scheme of the state’s budget crisis, prohibitive. (Actually, "interesting" might not be the right word; "unconscionable" seems to fit better.)

Clearly, though, slashing funding for education in favor of defending abortion restrictions must not be that prohibitive: Brownback was, after all, able to make it to four different school auditoriums this week so he could pretend to sign a law he’s already signed — and one that will have major implications for his constituents, regardless of gender or age.