Right-wing lunatics think the military is planning to invade Texas. Here's why.

The Tea Party actually thinks the military is about to attack the Lone Star State. We wish we were making this up 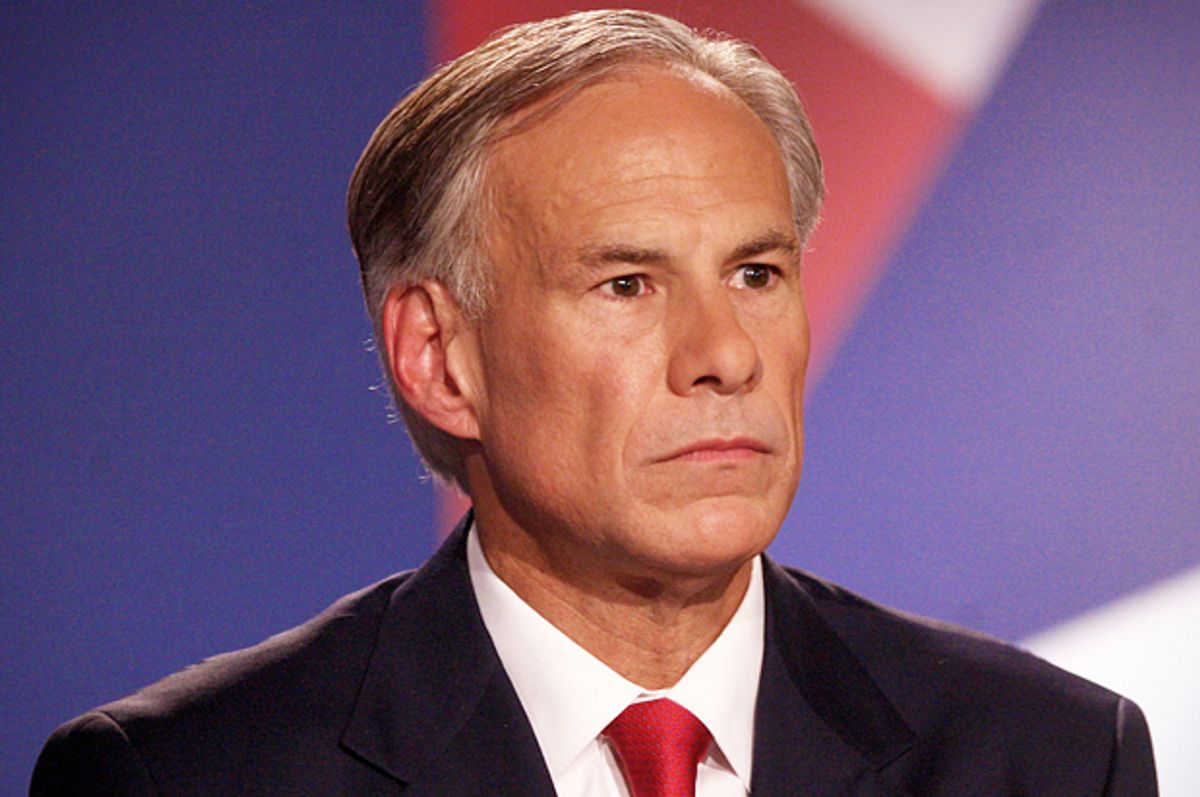 You have probably heard these lyrics at least a thousand times at televised Republican rallies:

Those of course are the words to "God Bless the USA" by Lee Greenwood, a song that could almost be described as the conservative national anthem. It perfectly expresses the patriotism of the Real American, the man and woman who love their country without reservation, the ones who boldly invite dissenters to "love it or leave it" and attack anyone who would dare besmirch the red, white and blue. These colors don't run, hippie...

But something has changed. In fact, it appears that the right wing in this country has become downright hostile to the one government institution they heretofore had defended with every fiber of their being: the military. This week, members of the conservative fringe, having apparently become convinced that the army is holding a large training exercise in the American southwest in order to prepare the ground for a federal government takeover of Texas, are themselves metaphorically spitting right in the faces of U.S. soldiers:

“It’s the same thing that happened in Nazi Germany: You get the people used to the troops on the street, the appearance of uniformed troops and the militarization of the police,” Bastrop resident Bob Wells told the Statesman after the meeting. “They’re gathering intelligence. That’s what they’re doing. And they’re moving logistics in place for martial law. That’s my feeling. Now, I could be wrong. I hope I am wrong. I hope I’m a ‘conspiracy theorist.'”

Yes, we all hope that Bob is a conspiracy theorist. It would be disturbing indeed if the U.S. military were preparing to invade Texas and turn it into Nazi Germany.

Here's what the U.S. military says it's doing with this so-called simulation:

USASOC periodically conducts training exercises such as these to practice core special warfare tasks, which help protect the nation against foreign enemies. It is imperative that Special Operations Soldiers receive the best training, equipment and resources possible.

While multi-state training exercises such as these are not unique to the military, the size and scope of Jade Helm sets this one apart. To stay ahead of the environmental challenges faced overseas, Jade Helm will take place across seven states. However, Army Special Operations Forces (ARSOF) will only train in five states: Texas, Arizona, New Mexico, Utah and Colorado. The diverse terrain in these states replicates areas Special Operations Soldiers regularly find themselves operating in overseas.

The training exercise will be conducted on private and public land with the permission of the private landowners, and from state and local authorities. In essence, all exercise activity will be taking place on pre-coordinated public and private lands.

For some reason the right-wingers read that and came away with the idea that these special forces personnel were secretly infiltrating their towns, schools and businesses across the region. Take this frightened citizen's reaction:

The idea that training among small towns in the USA is supposed to provide "realism" for operating in Afghanistan or Iraq is utterly absurd. For one thing, small towns in America don't have teams of local rebels setting up roadside IEDs to destroy humvees and their occupants. Special Forces operatives are more likely to encounter people hurrying their way to Starbucks than trying to run any sort of armed resistance actions. No, military training on the streets of America isn't "realistic" training for fighting wars overseas. It's only "realistic" for military action that takes place on the streets of America itself.

Others, like this gentleman from "The Common Sense Show," have become convinced that this is far more insidious even than a practice for the day the U.S. military launches martial law throughout Texas:

In recent days, I have learned that the reason that we are seeing Jade Helm activity in so many areas and we are also witnessing the prepositioning of massive military equipment, is because Jade Helm forces will isolate certain geographic areas, thus trapping a segment of the population and keep them from fleeing to other areas. The second part of Phase III of the Jade Helm operation will be the insertion of Special Forces death squads among the civilian population which will target key dissident leaders.

Yes, they believe the U.S. military is inserting Special Forces Death Squads among the civilian population of the Southwest in order to assassinate American citizens. And who might those "dissent leaders" be? God-fearing Patriots, that's who:

“Patriot groups across the country are preparing to launch a ‘Counter Jade Helm’ operation to keep tabs on a controversial U.S. military exercise that some fear is part of preparations to train troops for civil unrest and martial law”. Among those protesting the Jade Helm 15 drills are former Special Operations forces as well as many veterans groups. Along these lines, I am beginning to receive invitations to speak about Jade Helm to various groups including the Oath Keepers.

This person links to Alex Jones' conspiracy website InfoWars, which seems to be the main source of all this alleged inside information about the Jade Helm exercises. He also cites the Oath Keepers, who are very agitated about this "infiltration" as well. (Oath Keepers are former and current members of the military who take an oath to disobey orders that violate the Constitution. Who decides what the Constitution says in these matters is apparently left up to Alex Jones. And maybe those "Duck Dynasty" guys too.)

The last time we heard from the Oath Keepers, they were supporting the National Guard, along with the police in Ferguson by stationing themselves on top of buildings armed to the teeth with the intention of "protecting the businesses." You may recall that in one of the odder side stories from that period, one of the Ferguson police commanders was revealed to have given a speech before an Oath Keepers meeting in which he said, among other shocking things:

"Roy Blunt and Claire McCaskill won't even talk to me --- they say 'You're an extremist.' I say amen. OK. And I'm real good with a rifle. My best shot is at 1,875 meters. I got me a gold star on that one. That's a fact. You run from me you will die tired. I'm dead serious, folks."

Oath Keepers didn't claim him as a member, although his speech seemed to be very well received.

All of this could be easily chalked up to the usual conspiracy-minded fringe activity. The best such people could really hope for would be a Bundy-style standoff, which seems unlikely since the military claims they have agreements in place to use private and public lands for their simulations. (Yes, this is really about simulating the desert terrain of the Middle East, not infiltrating Midland Junior High.) Still, considering that there are ongoing disputes about what constitutes public and private land, that's not beyond the realm of possibility. But the government assassinating members of patriot groups with Special Forces death squads probably is.

Unfortunately, this is not confined to the furthest corner of the conspiratorial fever swamps. Yesterday, the AP reported this amazing development:

"It is important that Texans know their safety, constitutional rights, private property rights and civil liberties will not be infringed," Abbott wrote. "By monitoring the Operation on a continual basis, the State Guard will facilitate communications between my office and the commanders of the Operation to ensure that adequate measures are in place to protect Texans."

There are many legitimate reason to criticize the U.S. government, the military and even the policies of assassinating U.S. citizens (which has happened, of course, but abroad). But this is ridiculous. There have been many, many military exercises carried out on U.S. soil by the U.S. military. Where else are they supposed to train? And just because the simulation map calls Texas "hostile" for the purpose of the exercise doesn't mean the military really consider Texans to be enemies of the state. It's only a war game, folks.

In his 2009 book "The Eliminationists: How Hate Talk Radicalized the American Right," David Neiwert traced the origins of much of contemporary right-wing discourse back to the far-right fringe. It's now made it fully into the mainstream. The governor of one of the 50 states ordered his National Guard forces to "monitor" the U.S. military to ensure they are not planning to turn Texas into Nazi Germany. This is, by the way, the same U.S. military that has 15 bases in the state of Texas.

There's really only one thing to ask these Real American Patriots at a time like this: Why do they hate the troops so much?