Hillary Clinton's smartest move: Say no to TPP, and join the Warren/Krugman forces 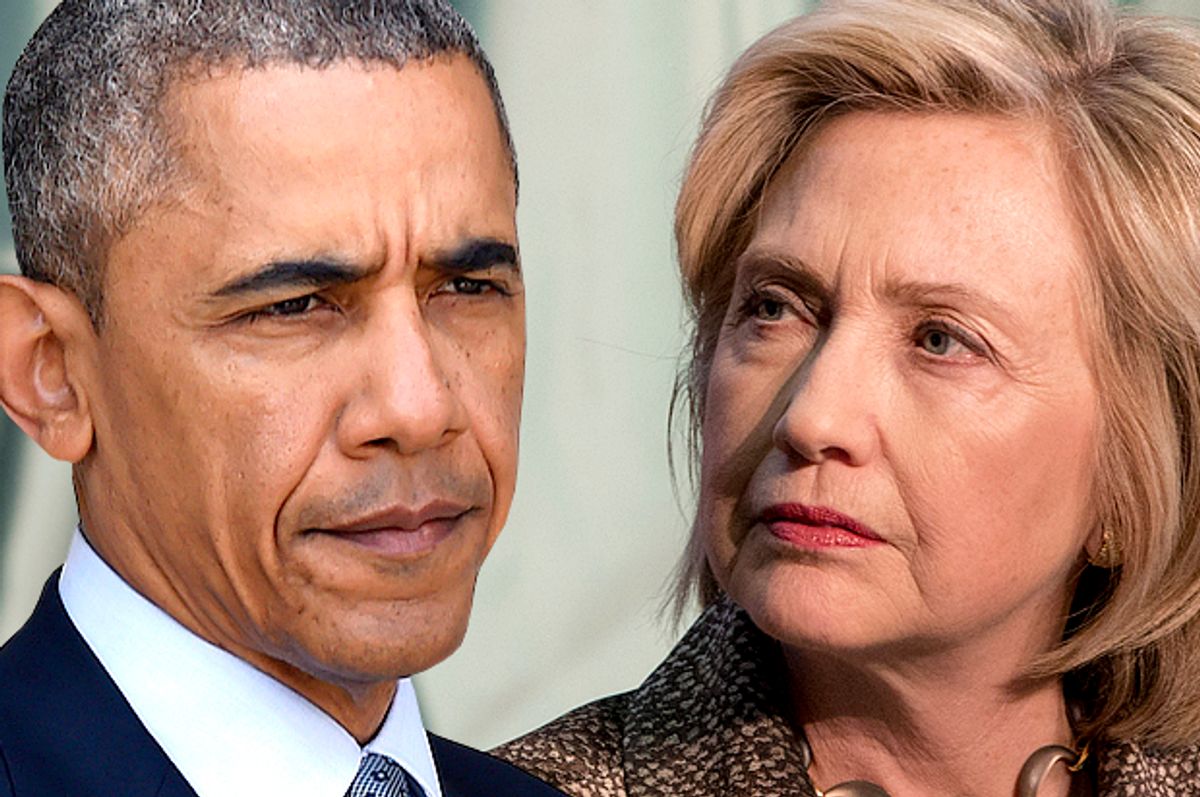 Sports obsessive that he is, President Obama likes to refer to the final two years of his second term as his administration’s “fourth quarter.” He does this because it’s a useful shorthand; but I’d guess his vanity, which is a characteristic of any successful politician, is motivational, too. By referring to himself as in the fourth quarter, Obama reminds an increasingly distracted press corps that the game isn’t officially finished for him quite yet — and, until it is, he intends to keep playing.

Since being the center of attention usually means being the focal point of criticism as well, that’s probably a role that Hillary Clinton, Obama’s former secretary of state and would-be successor, is happy to leave him for the time being. Better he suffer the slings and arrows of outrageous fortune (a.k.a. the Republican Party) from the comfort of the White House than she do so while pretending to enjoy Iowa’s signature cuisine.

But while there may currently be a sort of harmony between the Democratic Party’s two most influential figures, their respective self-interests are only complementary up to a point. Sooner or later, it’ll be time for Obama to cede the spotlight and the stage to the Clintons yet again; and sooner or later, Clinton will have to accept her role as the party’s de facto leader while establishing how (and why) her stewardship will be different. The guardians of American politics’ unwritten rules will expect nothing less.

Rather than delay the inevitable until it’s foisted upon her by the press, wouldn’t it be easier if Clinton got ahead of the meta-narrative and established where she breaks with the president herself? I think the answer is quite clearly yes. The harder it is for the press to succumb to its weakness for narcissism and frivolity, the better. And Clinton’s at her best when talking about policy — not her own “authenticity” or how the press corps’ feels — to boot.

For these reasons and others, I think the time is now for Clinton to announce she’s against giving the Trans-Pacific Partnership (TPP) the “fast-track” treatment. In terms of politics and policy, it’s the right thing to do. And with liberal anger toward Obama at a TPP-induced peak — and with Sen. Bernie Sanders challenging her from her left — circumstances could hardly be better. She should do it, and she should do it soon.

There are arguments against her reaching and/or announcing a stance of opposition, of course, on grounds of policy as well as politics. It’s just that none of them are especially good. Yes, there may be something awkward about a onetime NAFTA champion opposing the TPP. But Clinton has begun walking away from elements of her husband’s record already, and it’s hard to imagine how distancing herself from one of his most controversial and unpopular initiatives will hurt. A willingness to change your mind, provided it’s for good reasons, can even be a plus.

And, yes, taking a dissenting stance on TPP will no doubt surprise and anger some of her wealthiest donors. They’ll no doubt trash her in the elite press and claim she’s just pandering. But Clinton’s got so much backing from the Democratic 1 percent that she’ll be in no risk of running out of funding — and in the extremely unlikely event that the Forbes 400 stops taking her calls, she can always rely on some of her own vast wealth. (Besides, there’s a good chance the rest of the 1 percent will simply follow Wall Street’s lead and assume she’s full of shit.)

That answers the big questions on the political side, and the policy argument is even easier. President Obama can parse language as much as he likes — that’s what a law degree is for, after all — but Sen. Elizabeth Warren is familiar with the Harvard Law campus, too, and she’s not lying when she describes fast-tracking TPP as equivalent to “greasing the skids.” If fast-track passes and Congress can vote on the deal — but not amend it — the pressure to approve it will be enormous. There’s a reason the supporters of fast-track’s arguments are so anti-democratic.

The fast-track bill has clearly become a proxy for the entire TPP, so if Clinton opposes it, the political class will no doubt frame it as Clinton acquiescing in the face of a hoi polloi revolt. But although that would be stupid on the merits — unless Nobel Prize-winning economists like Paul Krugman and Joseph Stiglitz are now considered to be among the ignorant masses — it would frankly be politically advantageous for Clinton. It’s the safe bet in reality, upon close inspection. But the political press isn’t big on details; they’ll say Clinton’s move was surprisingly bold.

As Clinton’s embrace of criminal justice reform and marriage equality suggests she understands, a chief goal of her campaign will be persuading the Obama coalition that she can learn from the president’s mistakes and build on his accomplishments. Joining Sen. Elizabeth Warren and opposing the TPP fast-track would be a great way to start.