The GOP's destructive Vietnam mythology: How the right's self-glorifying delusions led to decades of avoidable war

In 1980, Reagan turned the Vietnam disaster into a faux-patriotic rallying cry. We've paid the price ever since 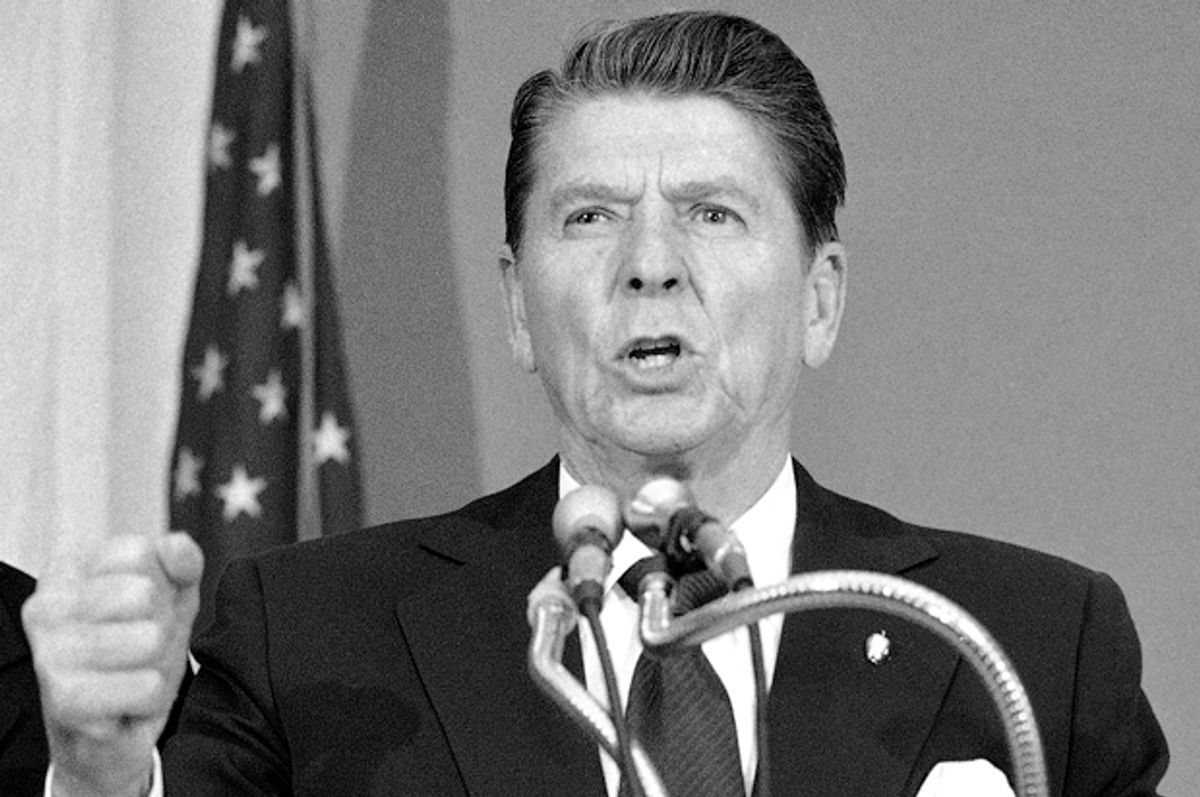 It only took about five years from the fall of Saigon on April 30, 1975, for the American right to succeed in burying the moment under mounds of revisionist horse shit. Ronald Reagan, speaking at a campaign appearance in the summer of 1980, said,

It is time that we recognized that [the American War in Vietnam] was, in truth, a noble cause... We dishonor the memory of 50 thousand young Americans who died in that cause when we give way to feelings of guilt as if we were doing something shameful.

Reagan’s letting-down-the-troops angle was a brilliant rhetorical tactic. According to the story he and his fellow conservatives told, the only problem with the Vietnam War was that we hadn’t “let the soldiers win it.” By the time he took office, Reagan’s conscience-free take on the war had gained traction among a public eager for easy absolution and a restoration of America’s “standing in the world.” It would go on to serve as convenient justification for other, similarly doomed wars of adventure in the years to come.

The story of the fall of Saigon as the right tells it is not one of American hubris getting its comeuppance via popular revolution or withdrawal of broad support at home, but one of sinister betrayal by spineless bureaucrats, cowed by selfish, pampered, troop-hating radicals. America’s failure was not one of dubious moral judgement on the part of its ruling class, but rather moral turpitude on the part of its young people. Wall Street Journal editorialist Dorothy Rabinowitz saw the era as one of “wild excess...self-glorification and narcissism..." by "an incredibly spoiled, self-indulgent generation....who were taught to think everything they say is right,” a perfect articulation of the self-justifying canard at the heart of what has become our popular understanding of the war, and of the similarly upside-down, false histories now being spun about Iraq and Afghanistan.

Throughout the Reagan/Bush years, right-wing fabulists worked tirelessly to convince the public that the peace marches and race riots of the '60s had done more damage to this country than the war and racism that sparked them. That idealistic, pot-smoking, occasionally idiotic and arrogant teenagers, along with a small number of genuine radicals on the left, were more harmful than the paranoid, war-mongering, racist, sexist, corrupt, Constitution-subverting presidents, politicians, generals and police who spied on, tear-gassed, beat, slandered, suppressed and murdered countless numbers of their fellow citizens, not to mention 3.4 million people in Indochina, and the 58,000 American soldiers sent to kill them and die for no reason.

The right’s willfully amnesiac version of the '60s is such conventional wisdom now that even ostensibly “liberal”  journalists can’t seem to help resorting to its tired tropes. In interviews given a few years ago while promoting his documentary about 1968, Tom Brokaw defined the era with a hypothetical, illustrative scenario: A man works hard and plays by the rules all his life, raises himself out of the working class and by the ’60’s is raising two kids in a comfortable home. He sits down to dinner one night to be told by his teenage daughter, who’s wearing, in Brokaw’s words, “a blouse without a brassiere,” that she’s on the pill, and, by his son “with hair down to his shoulders, that he shouldn’t worry, because he “knows how to get out of the draft.”

For Brokaw and other mainstream journalists, the defining traumas of the '60s were inflicted by protest-marching, draft-dodging, long-haired sons, and braless daughters on the pill. (Oh, and yes, there were also some assassinations, and they were bad, too, in a generic, completely decontextualized sort of way.) The worst injury of the decade was to the delicate sensibilities of hardworking, middle-class white men.

This vision of the era has become so entrenched it’s almost impossible to imagine a figure like Brokaw describing an opposite, and far more essential version of the same scene: one where, say, a young man of draft age thinks that defending a corrupt dictatorship in a civil war on the other side of the world goes against everything for which his father’s generation supposedly fought. One where maybe it’s the son who’s offended, by the way his father treats his wife, or talks about his one black co-worker, or seems so untroubled by his job at Dow Chemical. Or maybe a scene where the draft dodger is named Cheney and he tells his dad he has “other priorities” than fighting communism. But, unless Norman Lear has a sudden career resurgence, that kind of restoration of sanity is not going to happen any time soon.

That’s too bad, because the hard lessons of the '60s would come in handy in 2015, if they weren’t obscured by the right’s self-serving fables. It was only a few years ago that George W. Bush said about the fall of Vietnam that, “The price of America's withdrawal was paid by millions of innocent citizens whose agonies would add to our vocabulary new terms, like boat people, re-education camps and killing fields." It was an obscene and almost psychedelic distortion of reality.

With the secret, unconstitutional bombing of Cambodia by Richard Nixon, the United States knocked over the first of the only dominoes that would ever fall in South East Asia, and dragged Cambodia into a civil war that led to the killing fields of the Khmer Rouge. Without the Vietnam War, Pol Pot would almost certainly never have come to power. His regime was a creation of our war,  in the same way that ISIS is the offspring of our occupation of Iraq in 2003. The Killing Fields only ended after the Vietnam War, when the Vietnamese, our former enemies, overthrew the Cambodian tyrant.  But none of those facts were troubling enough to Bush to keep him from spinning the story his own way. Not because they aren’t true, but because they aren’t known anymore. Because we hardly ever hear about them.

The alternate-reality conservative narrative of those times needs to be confronted and challenged. America’s capacity for self-refection being what it is, a popular reckoning with the truth is not going to happen any time soon, but taking even baby steps in that direction might help us avoid repeating the moral mistakes of the Vietnam Era: the concocting of grand paranoid fantasies like the domino theory and the Bushies' “clash of civilizations,” waging wars of choice against countries that have done us no harm, cultures we know nothing about and whose languages we refuse to learn, in the self-glorifying delusion that it’s our destiny to save them from themselves. It might keep us from wallowing in self-indulgent self-pity, and force us to acknowledge the damage we’ve done to ourselves and others.

The important, lasting injury we did to ourselves in Vietnam wasn’t inflicted by American protesters or draft-dodgers. Despite the way they’re depicted in popular culture, those dissidents were, for the most part, mainstream, middle-class families, sickened by a war they watched on their televisions every night (as opposed to the Iraq War, which was rendered invisible by an administration that learned the political lessons of Vietnam all too well.)

My parents, both products of working-class families and graduates of a tuition-free public university, marched often with other suburban families. They never carried the Vietcong flag, or saw anyone else do it. They never committed any acts of violence. They did have rocks thrown at them by construction workers, and they were spit on (unlike the humiliated, returning soldiers of right-wing legend) but they kept marching, because they thought that was the right (and American) thing to do.

Their story is absent from the right-wing telling of their times. One of the central themes of that telling is that the “excesses” of the sex-crazed, drug-addled left helped create the modern conservative movement, and no doubt that’s true. But that movement has succeeded, in part, because it has grossly exaggerated the excesses of the left and washed its own from collective memory.

Isn’t the “self-indulgent behavior” of the three-martini generation at least relevant to the discussion? Didn’t members of that generation, led by the alcoholic Richard Nixon, commit the far more reckless and destructive acts of the time period?

Very few influential right-wing figures of the time have reexamined those moral failures. For Pat Buchanan, the years of My Lai, and the Chicago police riot were years when conservatives “got to point at these kids and say Is that who you want running your country?" His defining memory is, “…when they had the riots at Columbia and Mark Rudd took over the campus. I wrote a statement [for Nixon] denouncing these over- privileged kids for what they were doing ... Let me tell you, they didn't have any support in Middle America."

This unsurprising lack of reflection and remorse on the part of conservatives has been aided and abetted for years by the he said-she said ethos of modern journalism, which confuses evenhandedness with objectivity (and is itself one of the more insidious legacies of the 1960s.) It leads the public discussion toward a subtle, often unconscious, ratification of a false history, a history that has in turn been the basis for much of the success conservatives have enjoyed over the past 40 years.

The real history of the Vietnam era is too valuable to ignore . The '60s was not only a time when, as the cliché has it, “the social fabric was torn.” It was, more profoundly, a time when the social contract was torn, by our leaders. The injury those leaders inflicted on American life was far more acute, and more definitive, than the reaction to that injury by their children.