You're underestimating your plants: The strange and surprising world of intelligent flora

Plants are intelligent, argues scientist Stefano Mancuso. And it's time we start treating them accordingly 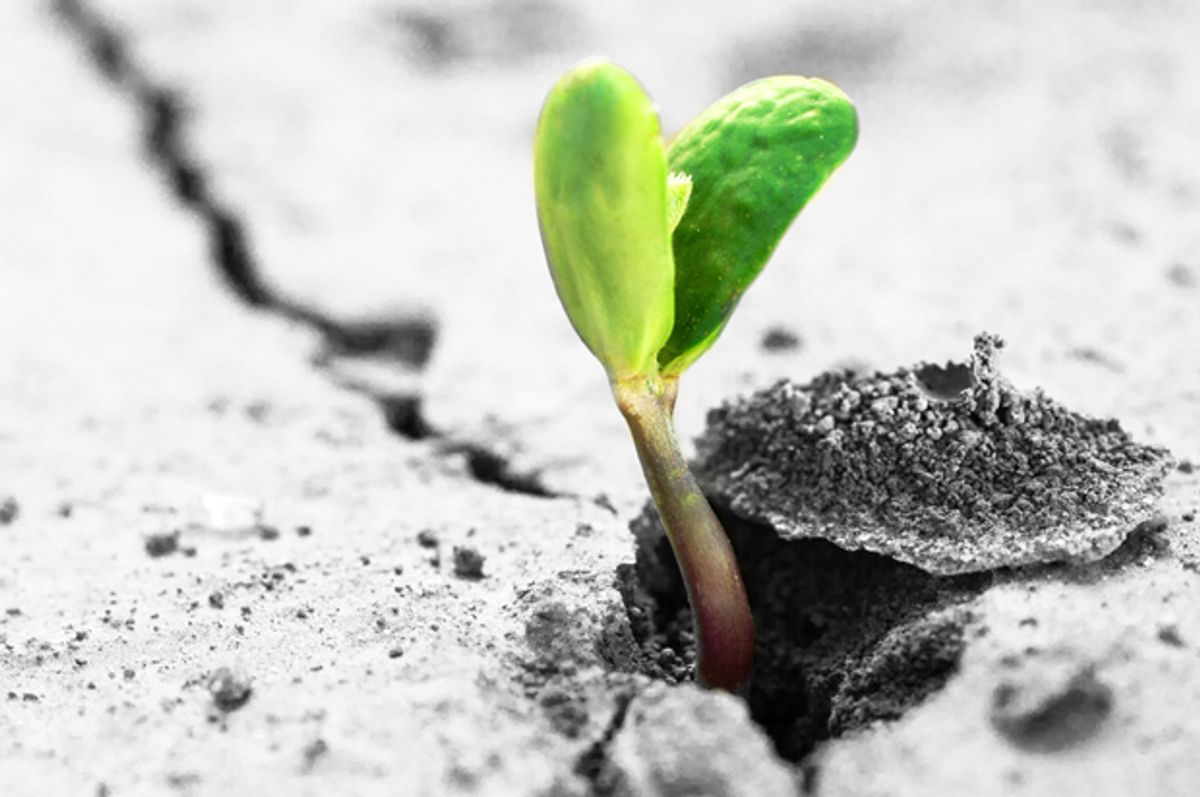 We sometimes refer to people in comas as "vegetables," a word choice that's begun to fall out of favor, for understandable reasons -- a person, even one who has lost his or her sensory and motor capabilities, is still a person. And at the risk of sounding like a parody of political correctness, the term isn't really fair to vegetables, either.

So argues Stefano Mancuso, a Florence-based plant physiologist whom Michael Pollan dubbed the “poet-philosopher” of the plant intelligence movement. Plants, as Mancuso and co-author Allesandra Viola write in "Brilliant Green," a short primer/manifesto on the history and science of this emerging field, can move -- with intention. They have the same five senses as we humans, along with 15 others: along with being able to detect light and smells, they can sense the presence of water, for one, as well as chemical signals sent from other plants.

That's right -- according to Mancuso, plants have social lives, too.

You're permitted some time to wrap your mind around this -- the mainstream scientific community certainly still is. It's once you start to come around to seeing things Mancuso's way, though, that things get really challenging. If a plant is intelligent, does that mean we need to start treating them better? Is it possible to imagine a future in which we afford plants rights? Forget that, even -- should we feel guilty about eating salads?

Salon had a lot of questions for Mancuso; some answers follow. Our conversation has been lightly edited for length and clarity.

When you say "intelligence," do you mean it as a rhetorical way of understanding the way plants operate? Or do you actually mean intelligence in the way we conventionally think about it?

What I mean is that plants are actually intelligent beings. The point is the definition, what we mean by intelligence. So normally, if you speak with a U.S. scientist or psychologist or people involved with cognitive science, they normally tend to produce a definition of intelligence that is strictly limited to the human or high-level animals, like primates or something like that. My point of view, it’s much more evolutionary-sounding. I think intelligence is a real principle of life -- it’s something that you cannot survive without. So not just plants, but every living organism must be intelligent to survive because, for me, intelligence is the ability to solve a problem. Of course, our ability to solve problems is different from that of the plants, but it’s just a quantitative difference, not a qualitative.

You describe in the book how we have a long history of wondering if plants are intelligent or have souls. What has changed now that has allowed us to start answering those questions?

You are right that there is a long history. Already the ancient Greeks were discussing whether plants have intelligence or not. What is different today, is that we have the scientific tools to see plants in action; to show the behavior, the social relationship, of plants. It’s something that even 50 years ago wasn’t possible. They are not high-level scientific tools. One of the most important tools in studying plants from this point of view has been the time-lapse. This [holds up an iPhone] is a wonderful tool for studying plant behavior today, because you can put a time-lapse in front of a plant or a group of plants, and in two days you can see very complex behavior. Even 15 years ago, it was really too difficult to see, for example, how roots were competing or cooperating. Today it’s a very easy task. Every one of my students is able to do this, and they are actually enjoying, in the lab, standing about, looking at the cooperation or competition in plants.

So time-lapse has been one of the first breakthroughs in the study of plant behavior. The second one has been the discovery that plants are actually great communicators, but their communication is based on volatiles -- chemicals -- not on sound or anything else. So studying such wonderful new worlds of volatiles from the point of view of a vocabulary started to give us a lot of information.

Is there something that you observed using time-lapse that you remember being particularly surprising to you?

Actually, I can tell you how the interest in plant behavior started with me. It was thanks to the time-lapse. At that time, I was a Ph.D. student and my task was to study the way the roots were able to detect an obstacle, and to move around an obstacle. I started to use the time-lapse for this, because I wanted to have an idea about how was the movement. And what I saw at that moment was that the roots were turning before arriving on the obstacle. That demonstrated, from my point of view, that the roots were aware of the environment. That was the first evidence for me that there was something much more complex in the plants.

Are there things that you’re still trying to prove or haven’t been able to figure out? Can you be sure whether there’s really intention there?

Today in my lab, we are studying in two different, let’s say parallel, ways. One is the social relationship among plants. I think that would be incredibly interesting to try to explain how plants behave differently according to their neighbors. If the neighbors are relatives, there is a kind of behavior. If they are strangers, there is a completely new, completely different behavior. This is something that we are trying to find, how the plants are able to recognize the plants around them and how they can change their behavior accordingly.

The second point is memory and learning. This is the most important and the most fascinating. At the beginning of the past year, we published a paper where we were able to demonstrate that the plants were able to learn -- for example, that a specific stimulus was not dangerous. They were able also to learn not to react, not to spend energy responding to a non-dangerous stimulus. What was incredibly surprising for us was that we left plants completely undisturbed for almost two months; at the end of the second month, the plants were all the time remembering that a specific stimulus was not dangerous. What we learned from that experiment was that plants had a memory. We don’t know how they can memorize, because they have no brain. There should be another, completely new system to store information that could be incredibly interesting to find out. The other thing we want to find out is how long this kind of memory is. Two months is a lot. Just to give you an example, in insects, the average length of the memory of information is 24 hours. On the contrary, the evidence is that plants are able to store information for very long periods. It’s something very fascinating, so at the moment, I think that the real, big point would be to find how plants are able to store information, because answering this question would make it possible to study plants from a completely different point of view, and also to open technological new possibilities. We have a new way to memorize that we didn’t know until now. So we could learn something practical from it that we could use.

It’s something that we could somehow use in our technology?

Yeah, that’s absolutely the point. One of the main founding sources of my lab is from technological firms or computer software houses that want to implement in their software the new discoveries coming out of the plant world. Just think of plants: They are completely different organisms compared to animals. A single plant is much more similar to a colony of insects. So a plant is very similar to a colony, this means also that in the plants we have huge networks of information traveling among the different modules. To understand how the plant is able to manage this huge network would be incredibly interesting from a technological point of view, because we could use this information for building our network data.

The ethical implications are interesting, too. What does it mean to start treating plants as intelligent beings?

Yes, you are right. It’s a new vision. Treating plants as intelligent beings means first that you need to give plants rights. So we cannot do what we want with plants, as we did until now. I know that when I talk about the plants’ rights with my colleagues or with everyone, that the first reaction is incredulity: it’s not possible to give plants rights!

Even as a vegetarian, I'm a little skeptical ...

Yes, but I mean, we gave rights to animals and we are still eating them. The two things are not linked. Giving rights to plants means that we cannot do what we want. For example, we cannot cut down all the Amazon for making agriculture. We cannot transform plants as we want, from the genetical point of view. They are a complex living being, so they deserve to be treated with dignity as are other living beings.

A second point is much more practical. If we can popularize the fact that plants are intelligent beings, I think that also the normal respect of everyone for the plant would change. So I think that everyone would look at plants in a different way and probably in a lot more respectful way. This is not important for plants, this is important for us. We need to protect plants if we want to survive.

Even without the intelligence argument, we know that.

The intelligence argument is something that probably can bring us to look at them in a much more respectful way.

And that includes not genetically engineering them?

Today, all the discussion about genetic modification is just about a plant. If you look around, you can see that no one is proposing genetic modification in animals. So no one is going to propose a new cow that's able to produce much more milk or is resistant to pathologies. Why? I think it’s the different level that we gave to plants and animals. You can do this with plants, because plants are low-level organisms. You cannot do this with animals because animals are really much more close to us. My point is, different animals and plants are on two different, parallel paths of evolution, but the level of complexity is the same. So plants are not easier or less sophisticated organisms with respect to animals. They are just different.

I think that most of the debate that exists about plants and genetic modification in plants stems from an idea of plants as low-level organisms that are completely in our hands and we can do what we want. I think the most important argument in the hands of the people that are against genetic modification in plants can be just ethical. It’s not true that modified plants are harmful for our health; that is completely untrue. Modified plants are perfectly healthy. The real point is ethical: You cannot modify a complex and evolved living organisms.