Hey, it would be stable work for the new dad 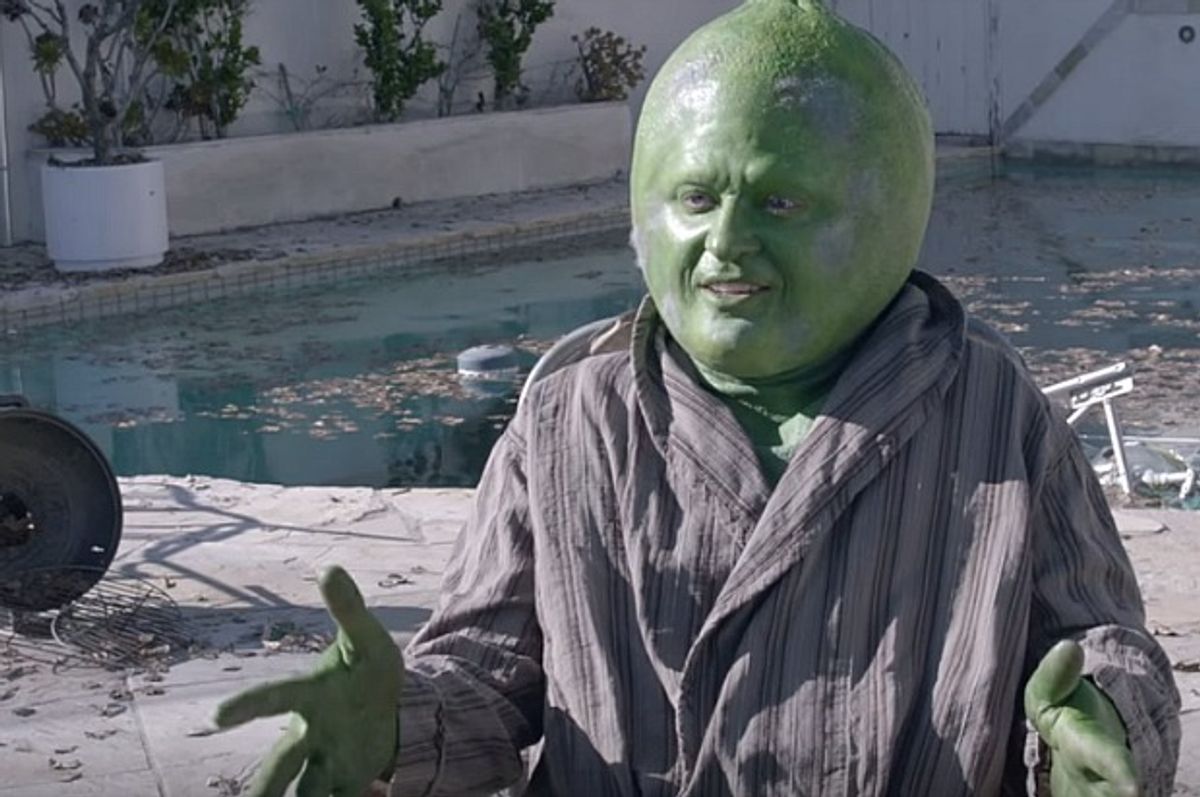 Year in and year out, Justin Timberlake’s music remains almost the definition of machine-made: Between his ordinary faux-soul voice, slicked-up production, pedestrian song choice and conventional beats, the former Mousketeer remains mind-bogglingly popular and musically about a half-step above Justin Bieber. (He gets points for passing up the opportunity to publicly urinate in mop buckets like his boy-band peer.)

But just as he disarmed us with his role as obnoxious Napster co-founder (please forgive the redundant phrase) Sean Parker in “The Social Network,” Timberlake has surprised us again with his new Tequila commercial, and not just because he is playing a piece of citrus fruit. He’s proven again that he’s a far better actor than he is a musician, especially when he is playing a broad, comic role bordering on or exceeding caricature.

Just how broad? In his commercial for Sauza901's newish tequila, he plays Rick “Sour” Vane, an enormous lime who sits poolside recounting – like a sunburned, aging Mafioso – his glory days. The No More Limes ad is timed for today’s Cinco De Mayo.

“We were rock stars,” Vane tells us in a nasally Outer Borough accent. “Oranges, dead! Marachinos – dead!” he harangues a group at a nightclub, big-haired woman at his arm, in what could be a scene from “GoodFellas.” (Or is it “The Wolf of Wall Street”?) “We’re the greatest condiment of all times! Doesn’t get any better than this!” he says, standing by a bureau topped with trophies.

A club owner and tastemaker show up on camera to offer “expert commentary” about the rise – and eventual fall – of the lime craze. “This is never gonna end!” Timberlake shouts.

Well, you can probably guess what happens next: This new line of tequila comes along and is so good, so pure, so something (we never really find out), that the mighty lime goes into steep fall. “It’s like we don’t even exist…,” Van says. “I hit rock bottom.”

We see a quick sequence of allusions to the way decline and instability was dramatized in ‘70s movies – riffs on “you talkin’ to me?” from “Taxi Driver,” Jake in front of the mirror in “Raging Bull,” and perhaps a “Godfather” reference – and we watch the new world pass Vane and his homies by. He coulda been a contenda.

So one of the things the No More Limes commercial provokes in us is to demand that Mr. SexyBack stop singing altogether and begin acting full-time. His acting career has not entirely caught fire yet, but he’s been in a handful of movies and he was certainly decent in his last role, a small part in “Inside Llewyn Davis,” which involved some singing that did not appear to be Auto-Tuned. It’s streets ahead of “Rock Your Body.” So far, most of what he can do comedically has come from his SNL appearances, in which he often sings, dances, quarrels with other celebrities, or plays a pompous famous person -- all stuff that's naturally funny. ("Dick in a Box" is in its own category.) His singing and dancing is better as parody than it is played straight. Why not his own sketch comedy show? It would give him a steady gig with decent hours — who wants to go on tour with a new baby at home?

But generally, we are less worried about Timberlake than we are about the humble green fruit he eulogizes in the commercial. The lime, of course, has had a tough time of it over the last year or so, and this Cinco De Mayo it seems to be experiencing a new wave of indignity. Last year, a combination of heavy rain, a disease that hit lime trees, and Mexican drug cartels – more than 95 percent of U.S. limes come from South of the Border – led prices to quadruple during part of 2014. “Criminal gangs are adding to the high prices by stealing from orchards and hijacking truck shipments bound for the U.S.,” an NPR report said. “Truck companies have had to add security to the trucks, which has raised the price of the fruit, too.”

While much of the recent coverage of the drought has concentrated on the evils of the almond, citrus fruit demands enormous amounts of water: It takes 77 gallons of water to make one pound of lemons, and limes are not far off.

The same conditions (or, as Congressional Republicans have it, divine guidance) that have slammed California’s Central Valley are hitting Mexican farmland as well: Though not all of its states are affected, Mexican agricultural production is down as much as 40 percent.

So maybe, for all its goofiness, the #NoMoreLimes campaign is right on time.