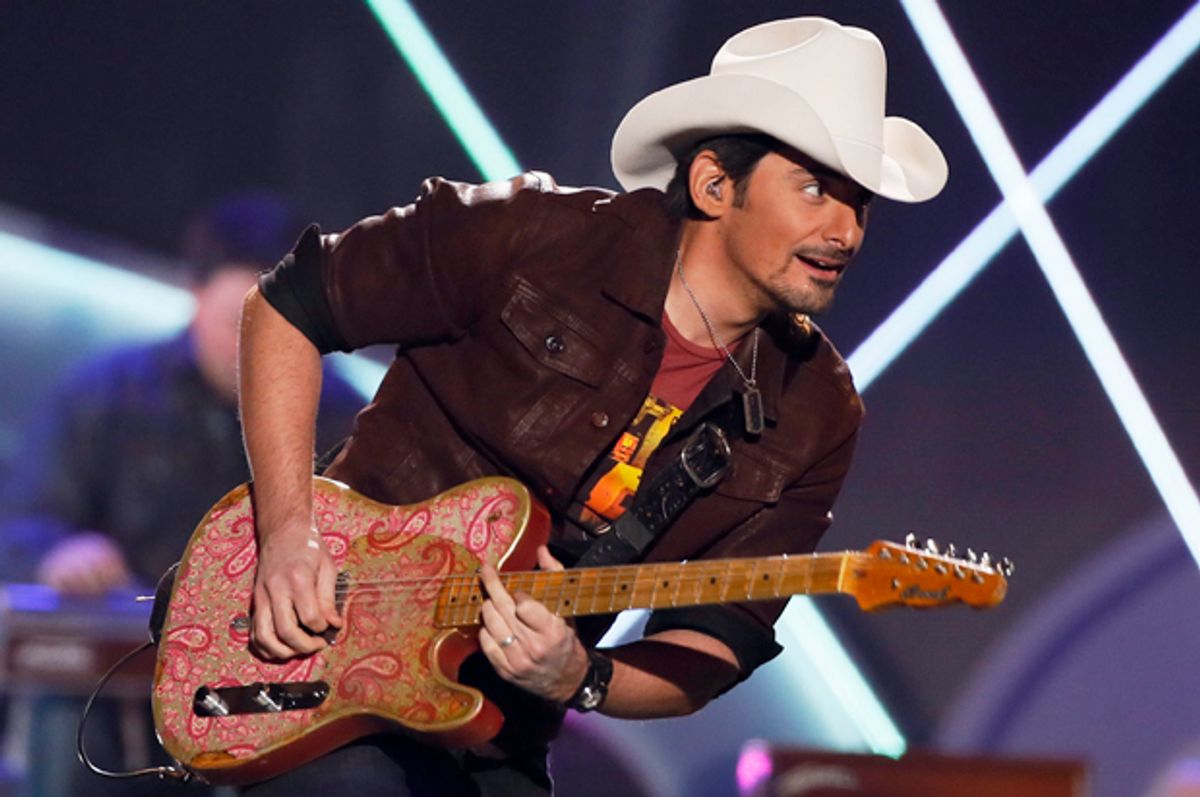 If you overlook the enormous gobs of money, the astounding size of its audience, and the titanic radio presence, things have not gone real well for mainstream country lately: Most of the music coming out of Nashville and played on red-state radio is a variation of what Martin Amis called “jingo-rockabilly.” But take the longer view – back to Maybelle Carter of the pioneering Carter Family, through Don Helms's playing on Hank Williams's “Hey, Good Lookin’,” through Merle Travis and Chet Atkins and James Burton and beyond, and it’s hard to ignore the role of the guitar, and often the guitar solo, in the evolution of the music.

And this is why we’re – for perhaps the first time – feeling sorry for Keith Urban: Country radio has starting to slice out the guitar parts from songs that appear on songs, even by proven stars. Country’s music – and its image -- is built on the guitar, a Billboard story reports.

But the guitar -- and other instruments -- ironically receive less spotlight in the music than they do at a Music City ballpark. The solo is under siege, and even the artists whose identities are tied to their in-concert musicianship -- such as Brad Paisley, Keith Urban and Hunter Hayes -- are required to pick their spots to step out on their recordings if they expect them to get played.

The story recounts the way axe-manship – a few seconds to nearly two minutes -- is cut from songs before they end up on country radio:

"The listeners' attention spans are shorter and shorter, and if they start getting bored with whatever it is that we're doing -- whether it's a musical riff, or something we're saying , or too many commercials -- it's too easy for them to go somewhere else," says consultant Joel Raab. "So it's really about forward momentum on the radio station. Is that guitar part moving everything forward? If it is, great. If it's not, then maybe it needs to be edited.

We’ve been looking around lately for something more shallow than bro-country and contemporary singing cowboys – and we may have finally found it. (And please save us, by the way, from radio "consultants.")

This is the same country radio establishment that entirely ignored the alt-country movement that – whether we date its origins with "John Wesley Harding" or "Sweetheart of the Rodeo" or Uncle Tupelo’s first recordings – and almost completely ignored T-Bone Burnett’s homage to old-time and country-folk in the "O Brother Where Art Thou" soundtrack. And now country-music geniuses are castrating songs by their own favorite musicians.

Much of this, says music historian Ted Gioia -- who has written books on jazz, the Delta blues, and in his latest, “Love Songs,” four thousand of years of amorous melodies – is about the triumph of the short attention span, which gets a bit worse every year. "Radio has always relied on simple formulas to attract listeners,” Gioia says. “But I fear the formulas are now too simple. Not long ago, stations built their playlists off a top forty, but stations are now recycling a smaller and smaller number of songs.”

Technology has made it easier for individualism or personality to be removed from music anywhere along the line – before, during, or after recording. Software is sometimes used now to decide which demos are worth recording, based on their similarly to existing popular songs.

Gioia also laments that the guitar, once a symbol of the country music ethos, is now considered dead weight by country stations — a shortsighted approach, he says. "This would be like taking a cruise on a ship that never left the harbor," Gioia said. "People just want to load up their plate at the ship's buffet and drink at the pool bar, so why challenge them with an actual journey?"

"The appeal of country music has always been based on its spirit of individualism and independence," he added. "The guitar solo represents precisely that. Radio stations may find that they are working against their own interests by cutting out that part of the track."

Specifically, this means we’re losing all kinds of vibrato, string-bending, chicken-pickin’, hammer-ons and pull-offs and other techniques in the country guitarist’s toolkit – both the bad and the good. (Few guitar players can best David Rawlings, for example, who plays with Gillian Welch and has become one of the most admired acoustic players alive — but you're more likely to hear him on AAA radio or NPR, anyway.) Certainly, we never need to hear the solo in “Free Bird” again. But a few summers ago, I saw Glen Campbell play a farewell show at the Hollywood Bowl. Besides the indelible songs – many written by Jimmy Webb and others – the show was distinguished by Campbell’s guitar playing, much of it on a Telecaster. For a man in his 70s, ravaged by Alzheimer’s, to be able to play licks on his guitar that well, that fast, with that much apparent soul, made me wonder if country music’s claims to divine intervention might be well grounded. It reminded me that nobody should mess with a guitar-playin’ man, woman or child. Some things are indeed heaven sent.