Being gay is not "a behavior": Just how offensive can these anti-LGBT billboards get? 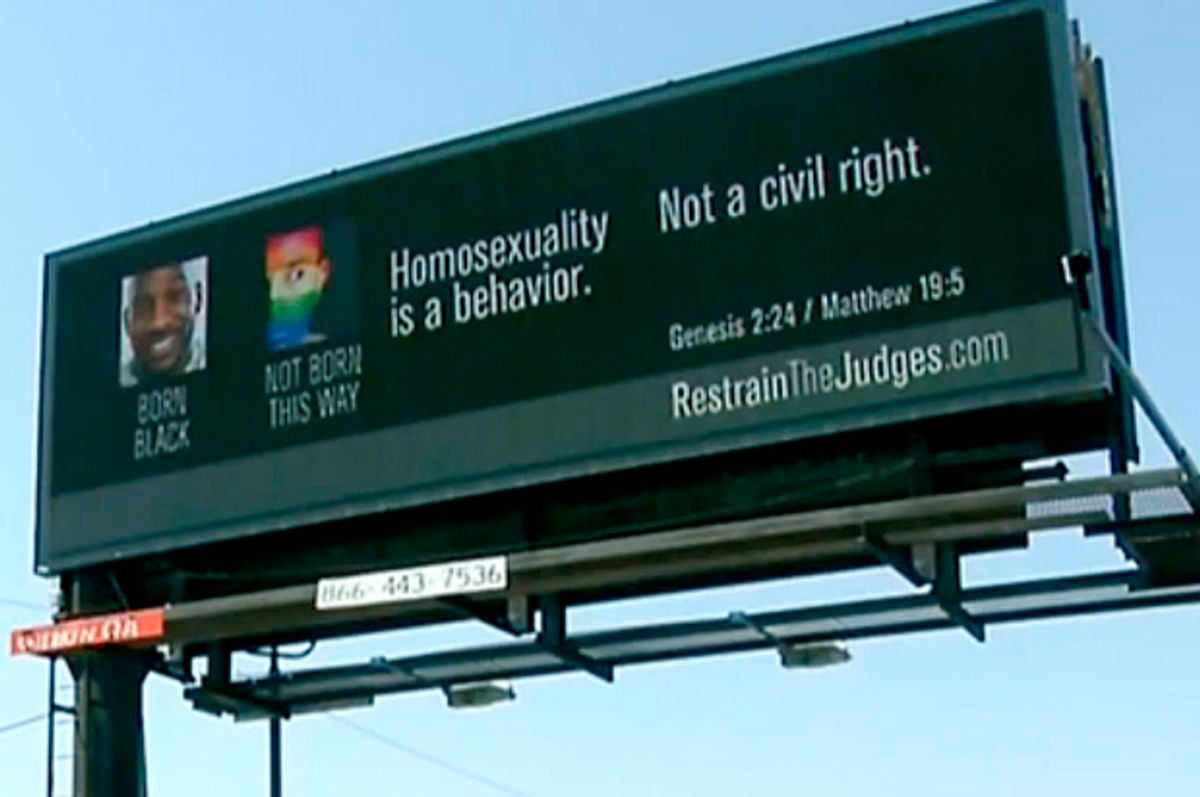 These must be very troubling and frustrating times for you, homophobes. A majority of Americans now support marriage equality, and face it, if it's not fully recognized where you live yet, it will be and soon. A majority of us also support gay political candidates, and we seem to be able to watch gay people on television and movies and listen to them as we drive around in post breakup sadness without the fabric of society crumbling — probably because if you look across the population, it's composed entirely of people who either are LGBT or who know someone who is. And yet, bless your tenacious, confused, chilly little hearts, some of you still don't get it. And you just cannot stop talking about it.

Drivers in the Detroit metro area this week were surprised — some of them stunned enough to pull over — when they saw a billboard that showed a picture of a woman who was "born Asian" and a rainbow-striped man who was "not born this way" and the message that "Homosexuality is a behavior. Not a civil right." Obviously, there are bible verses involved. It's the work of a charmingly low production values site called Restrain the Judges. It promises, "In order to prevent the Roe v. Wade of Marriage, we must act now" and urges visitors to mail politicians "to use the authority granted by the U.S. Constitution to restrain federal judges and the Supreme Court from undermining marriage any further!" Why? Because the organization says, "The homosexual agenda brings with it an unprecedented assault on religious liberty and freedom of conscience against pastors, churches, business and facility owners, employees, public officials, organizations, ministries, and citizens." You know, blah blah blah AGENDA. Why else? Because they want you to pay them to send "Restraining Order" letters to members of the Supreme Court and Congress, in packages ranging from $9.95 to $49.95. Blah blah blah CAPITALISM. It's being sponsored by several brilliantly named conservative groups, including Defend the Family and Americans for the Truth About Homosexuality.

The electronic billboard currently appears in Dearborn Heights, and is reportedly coming to Flint, Grand Rapids and Lansing as well. Motorist Ferman Smith, a gay man, told local news, "It's extremely upsetting to me that somebody would go that far out of their way even though they're know they're going to offend a specific demographic or group." Another passerby called it "one of the most disgusting things I've ever seen" and said, "I don't want to drive past this on the way to work." But a representative for one of the groups behind the billboards says, "The intent was not to offend. I believe that it's pretty hard in America to not say anything without somebody being offended. The issue here doesn't have anything to do with the gay community. It has everything to do with protecting freedom of religion."

Opponents of the billboard say they recognize the value of protected free speech — and that they're now fundraising to put up their own marriage equality support billboards to balance the message. And in case there's any doubt or question in the matter: the sexual act alone doesn't define gay people any more than it does straight people. If that were true, we wouldn't be debating over marriage now, would we? This is about so much more. It's about love. It's about family. It's about fairness. And you can scream all you want, but it's here and it's happening and no ugly billboard anywhere can change it. So get used to it.