My Morning Jacket's "The Waterfall": You've never heard Jim James like this 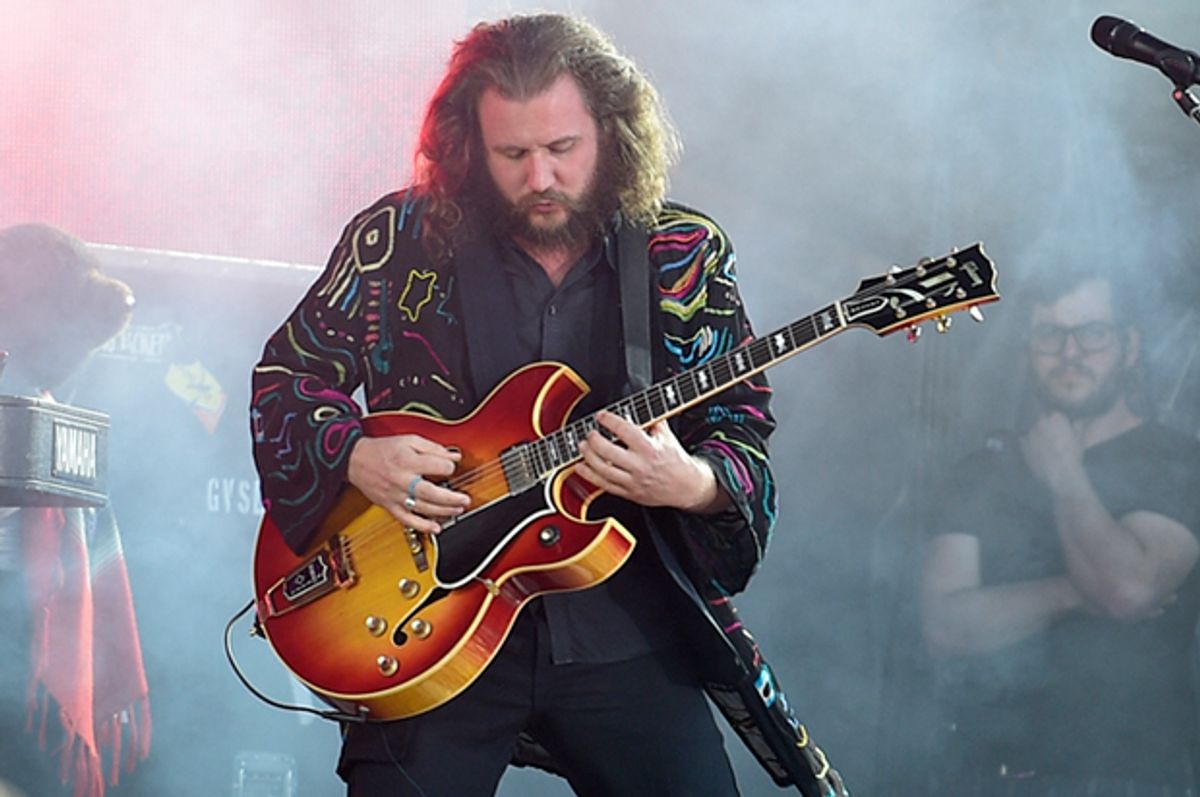 If 2015 has already been a good year for music, it’s been an especially good year for that time-honored rock-and-roll totem, the break-up album. Back in January Los Angeles folk singer Jessica Pratt conveyed heartache via tape manipulations and Duran Duran quotes on her latest album, “On Your Own Love Again,” which stands as one of the most obsessively listenable records of the year. Then came Björk’s “Vulnicura,” a contorted monument to her split with artist Matthew Barney that earned comparisons to Joan Didion’s grief memoir “The Year of Magical Thinking.”

By these standards, My Morning Jacket’s “The Waterfall” depicts a not-quite-sympathetic male protagonist similar to an Updike antihero—caddish, self-absorbed, impatient with the women in his life. Especially for a band that straddles the bro and the indie-rock audiences, the frankness of these new songs can be unsettling, at times even off-putting. On the other hand, “The Waterfall” may be the Louisville band’s best, most ambitious, and most nuanced effort in more than a decade, a musically inventive and lyrically nuanced collection that isn’t quite a concept album, but plays like one. It might be better described as a story album, as frontman Jim James recounts a particularly bad split and comes out the other end with new perspective.

“Get the Point” starts as a gentle folk tune, with a coffeeshop guitar strum, a rainy-day melody, and James wishing an ex “all the love in this world and beyond.” It’s a sweet sentiment, yet he follows it up with sarcasm: “I hope you get the point… the thrill is gone.” It’s the first hint that James will bust out of his established gentle-beardo persona and play the villain in these songs. First single “Big Decisions” is perhaps the standout, with its big, crunchy hook and its almost combative tone. “I’m getting so tired of trying to always be nice,” James declares, so he stops trying.

When “Big Decisions” was released as the album’s first single back in March, it had an air of bravado, as though it was about wriggling free of a destructive situation. And James told Rolling Stone recently that the song was inspired by a group of friends who were more interested in bitching than in improving their circumstances. Yet, there are so few concrete details in the lyrics that the song takes on a new meaning in the context of “The Waterfall,” where the surrounding songs suggest a darker, more combative tone. In particular, the chorus sounds like a putdown, insulting and even infantilizing its dismissiveness: “What do you want me to do? Make all the big decisions for you.” It’s an ugly scene, and “The Waterfall” begins to sound like the least generous break-up album in recent memory.

“The Waterfall” wouldn’t be as compelling if it didn’t sound so good. That actually goes a long way, especially during a week when Mumford & Sons are redefining their aesthetic from bland acoustic uplift to even blander electric uplift. Ever since My Morning Jacket dropped its debut “The Tennessee Fire” in 1999, they’ve consistently been one of the weirdest rock bands of the new millennium, refining oddball heartland rock into epic stage shows that have made them festival favorites. James’ massively reverbed vocals inspired a glut of similar acts during the 2000s (Band of Horses, Fleet Foxes), but the band’s slinky slow jams and rustic psychedelic rave-ups have proved less influential and more idiosyncratic.

By some standards—i.e., the exquisitely lo-fi “Tennesse Fire” and its follow-up, “At Dawn”—“The Waterfall” may sound clean and polished, but that only makes it easier for us to hear what’s going on in these songs. And there’s a lot going on: prog and jamband rock collide with r&b, country, and folk, sounding immense without sacrificing nuance. Guitars still provide the crunchy riffs and the skybound solos, but they’re rarely the dominant instruments. Instead, My Morning Jacket gives just as much weight to cinematic strings, rigid drum machines, jittery synths, and the occasional choir singing wordless choruses. It sounds familiar and new at the same time.

“The Waterfall” is a well-shaped album, sequenced with great care to emphasize a certain self-awareness. Had these songs been arranged in any other order, they might have sounded dour and defeatist, yet the tracklist eases you into the dark drama of the album, starting with the opener. “Believe (Nobody Knows)” is likely the sunniest and cheesiest song they’ve ever recorded, the latest in a long line of out-of-leftfield openers. It’s a slice of major-key promcore rock that could have played over the closing credits of “American Anthem” or any other ‘80s teen sports flick—outré by design but not necessarily retro, bombastic but wholly unironic. It’s exactly the kind of song that demands a sea of lighters (or whatever people hold up these days during climactic concert moments) and a crowd singing along with every word.

Nothing else on “The Waterfall” sounds even remotely like “Believe,” of course. Nothing else sounds quite so generous or hopeful, either. The song sitting at the top of the tracklist distracts you from the fact that “The Waterfall” is a very dark album for this band; it puts the happy ending right at the beginning, if only to make the downers that follow sound a bit less prickly, a bit less tense. It takes a while for those darker themes to emerge, as the first half of the album shuffles through various metaphors for life and relationships: love is “like a river windin’ its way,” a romantic split hurts like a compound fracture. A little Hallmark here, a little horror show there.

Granted, it’s all too easy to conflate rock singers with their rock songs—to hear lyrics as a direct and unfiltered reflection of whoever is delivering them. However direct and confessional this record may sound, it’s helpful for us to think of James as an actor playing a role or inhabiting a character. That shouldn’t lessen the impact of the music or diminish its candor — it’s just how songwriting works, creating a useful distance between the artist and his subject matter. In other words, we can hear James sing a lyric like, “It’s a thin line between lovin’ and wasting my time,” and still distinguish between a songwriter purposefully misquoting Al Green and an unreliable narrator presenting only one side of the story.

Listening to this or almost any other breakup album is like eavesdropping on someone arguing over the phone. You can only hear one side of the conversation. The obvious exception is Fleetwood Mac’s “Rumours,” which features band members writing some pretty harsh songs about each other. But very rarely does the other person have an opportunity to tell his or more often her version of events. All we hear is the singer’s story, so we naturally tend to commiserate with him. Bjork’s “Vulnicura” offers a useful counterpoint here. Musically the album is monochromatic, with each song set to a similarly austere string arrangement and a few nonintrusive beats. Emotionally, however, it is intense, as Bjork conveys a wounded desperation that sounds all too real. First she struggles to convince herself that things can get better (“Maybe he’ll come out of this loving me”), then she tries to figure out how to live a life beyond this relationship (“When I’m broken, I am whole”).

Bjork inhabits her role a bit more easily than James plays his, although that may be due to how forthcoming she has been about the real events that inspired these songs. She is definitely the more sympathetic figure, albeit not quite as interesting: Pop music is littered with broken hearts, but there are relatively few conflicted heartbreakers. Although he’s been — to his credit — tight-lipped about the specific inspirations behind these songs, there’s something intriguing and useful about the way he shirks our sympathies, expanding the rift between him and the “I” in his songs. “The Waterfall” puts you right in the middle of the kinds of uncomfortable arguments that everyone has, as though James was working through these issues in real time.

Perhaps it’s even brave for a songwriter to put himself out there right before the summer, when long tours and various festival dates will have him singing these songs, reliving these arguments, and inhabiting these roles night after night after night. He won’t be wasting his time, though. Or ours.