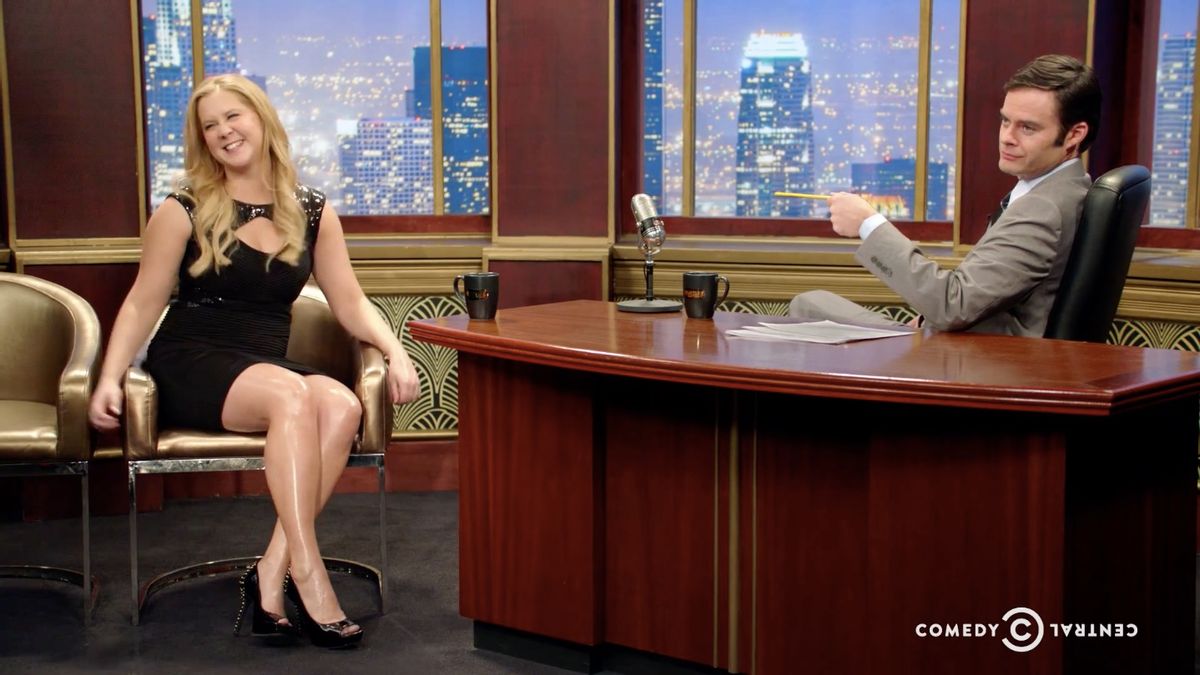 Last night, Amy Schumer tackled two of her favorite topics: the absurdity of Hollywood, and the trope of the “Cool Girl,” which she took on previously in last season’s “A Chick Who Can Hang” and more recently in this season’s bizarro wage gap PSA “Cool With it.”

For a more comprehensive accounting of the Cool Girl phenomenon, here’s “Gone Girl” writer Gillian Flynn on the subject:

In last night's sketch, titled "Celebrity Interview," Schumer’s specific target was an even more vaunted specimen: The Celebrity Cool Girl, and all those ridiculous late night talk-show interviews the Celebrity Cool Girl finds herself in. Per Schumer, the Celebrity Cool Girl is like the average Cool Girl, only even cooler and hotter. Her favorite movie is “Star Wars” and she is most comfortable "in her favorite team's jersey, or naked." She's totally cool with getting cunnilingus from dolphins. She stars in movies like "the musical 'Blade Runner' remake directed by Baz Lurhmann." She’s faux humble and faux klutzy (“I don’t know how to sit!”) and tells inane stories (“I have this thing that's very unique to me where I'm always cold"). She welcomes the sleazy host’s advances, even courts them (“I have always had the biggest crush on you!”) even though she is young enough to be his daughter. Ultimately, she is a construct of the bizarrely artificial dynamic these talk-shows shows create: A nonexistent male fantasy propagated by the women who appear to conform to it in breezy, charm-filled public appearances.

It’s a common dynamic, as anyone who has ever seen Emma Stone or Jennifer Lawrence on a late night show can attest to. But at the same time, I couldn’t help but think Schumer was riffing on one very specific duo: David Letterman and Blake Lively.

Blake Lively has been on Letterman’s show a lot, but let's take a look at a specific appearance from 2010.

The similarities are uncanny. For starters, Schumer’s character is called “Amy Lake Blively," and they are basically wearing the same dress. It's all there -- the inane banter, the goofy giggles, the inappropriate handsy-ness (see: 3.00) and the coy, come-hither body language. Like the host in "Celebrity Interview", Letterman constantly makes a point of playing up how young Lively is, while Lively famously said she had a huge crush on Letterman in an interview back in 2008 (and that he was in the "same league" as Leonardo DiCaprio). And Lively often leads Letterman to jokingly denigrate his wife. In a 2009 appearance, Lively proposed a a polgyamist marriage with herself and Julia Roberts, to which Letterman said of his marriage: "I'll tell you something off the record: We're not getting along. There's talk of a legal separation, so I'll be outside on the curb" (it's not quite waving a noose and yelling "Darflin," but you see my point). Meanwhile, Bill Hader’s character, though not a direct impression, certainly captures plenty of of Letterman’s slime and innuendo, the dryness, the nodding, the pencil-drumming. It’s Letterman without quite being Letterman, but the source material -- at very least, the inspiration -- seems clear.

So if Schumer is subtweeting Letterman, what are we to glean from that? It’s a sly and ballsy thing to do, considering that Letterman is the elder statesman of late night TV and he’s retiring next week, and most comedians are paying homage to the man, not subtly ripping on him. Yet he's a perfect target for Schumer: Letterman, for all his greatness, is a specific example of the revered Hollywood icon who sleazes on women and gets away with it — from flirting with his many "guest celebrity crushes" to his more sordid sexual history behind-the-scenes -- and who represents the wider culture of entrenched Hollywood misogyny that rarely gets called out.

I guess in a way, the sketch is both homage and critique: A wink and a nod to Dave, and a sly riff on a culture that Schumer participates in yet also considers herself removed from. (As we saw from her “fall” on the Time 100 Gala red carpet, Schumer is the kind of woman who manages to crash the party that she has already been invited to).

It's not that Schumer herself doesn't herself adore Letterman, much like say, "Amy Lake Blively" does; it's that she's more keenly aware of the rules of the game she is playing. Just look at Schumer's own recent "Letterman" appearance. They have a genuinely warm rapport, but at the same time, watching her interact with Dave is as much a parody of how those interactions are supposed to go as the "Celebrity Interview" sketch is. It's almost like a public performance art piece, as Schumer walks the line between making fun of the Cool Girl and being one.

In the interview, she plays along with Dave's advances and his imploration to do "something [she'll] regret," but then pushes them one step further to make him uncomfortable, lifting up her skirt to show him her "vagina" (which is actually a surfing scar). After putting his head in his hands, Dave laughs: "Well, I asked for it, didn't I? This is all my fault. It's always my fault." It's as close as the man comes to admitting he has been outfoxed at his own game.

In this sketch -- and in her own savvy, self-aware talk show appearances -- Schumer proves that she not only knows the rules, but that she can also be transgressive even as she follows them. She walks the fine line between playing the industry game and calling bullshit on the whole thing: Holding truth to men in power while playing right along with them.