"Deal with your sh*t, white people": Professor ignites a right-wing firestorm over "white college males as a problem" 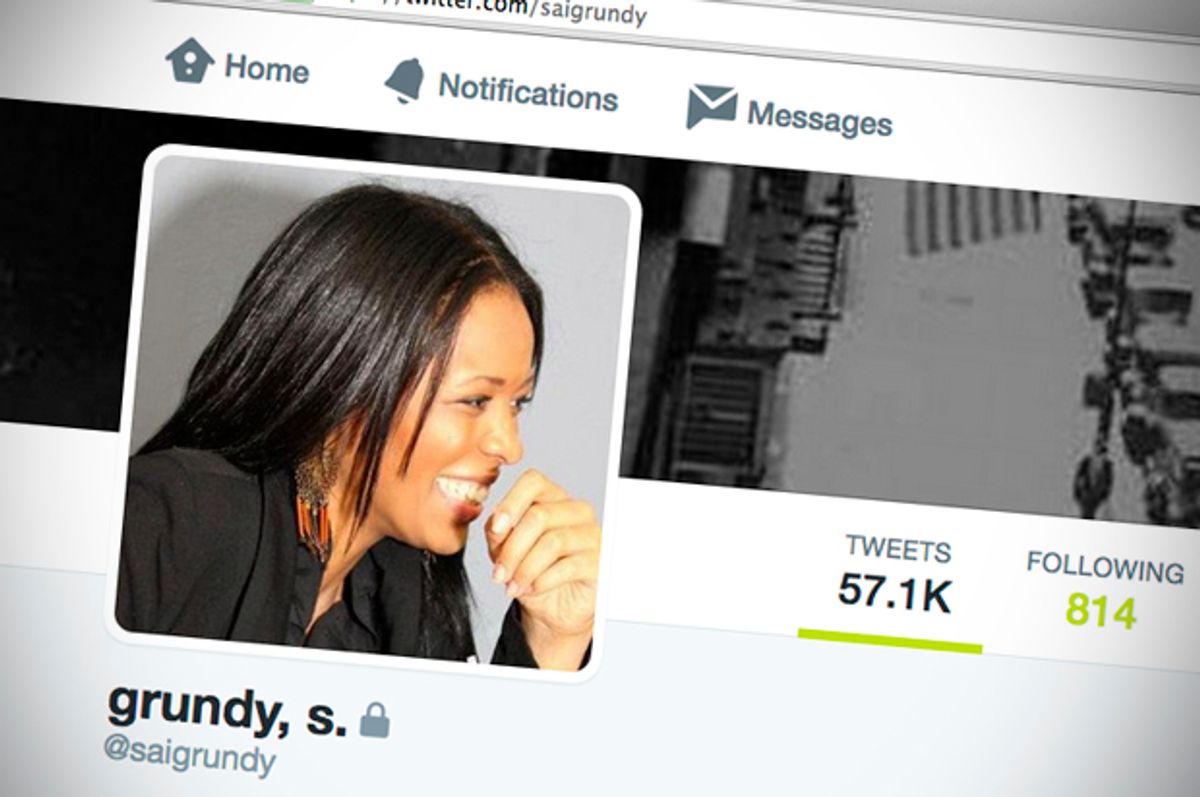 Spirited, frequently heated philosophical and political debates are the hallmarks of academia, and this week has been a particularly colorful one for some real corkers. But if there's one thing we can all agree on, can it be that social media brings out the worst in everybody?

You've likely already heard about the kerfuffle out of Boston University after University of Massachusetts Amherst student Nick Pappas posted the recent tweets of newly installed African American Studies professor Dr. Saida Grundy on his site called SoCawlege. Grundy has been outspoken, to say the least, noting in the past few weeks that "NO race outside of the europeans had a system that made slavery 'personhood' instead of temporary condition… there is also no race except europeans who kidnapped and transported human beings in order to elusive them and their offspring for life… in other words, deal with your sh*t, white people. slavery is YALL thing." She also asked, "Why is white america so reluctant to identify white college males as a problem?"

There appears to be a lot of stuff in Grundy's now protected Twitter feed that does not look like the work of an educator with a preference for rigorous investigation over sweeping generalization. In March she called St. Patrick's Day "the white people's kwanza" and "completely made up," apparently unconcerned with how Catholic saint's feast days work. In April she said that Rand Paul was "not a med school graduate" — ignoring while his academic career was unorthodox, he did finish med school. Later in the month, she posted a series of tweets about Bruce Jenner's "white cis male privilege" and announced, "Dear white people: u are all Ben Affleck. those euphemisms for ur ancestors like 'farmers' and 'pioneers' means you owned humans and killed natives."

Observing the posts, SoCawlege asked, "If you are going to work at Boston University you have to teach college aged white males eventually no? You probably already have/are working with them. To us, this seems like you are unqualified to grade their work as you clearly demonstrate some kind of special bias against them. They are a 'problem population' after all." And right wing media quickly went expectedly berserk, with Fox calling Grundy's remarks "racist" and writer David Horowitz opining that "Anti-white racism is rampant in Black Studies programs which are generally indoctrination programs in left wing politics."

Over the weekend, BU spokesman Colin Riley issued a statement that "While we recognize that Dr. Grundy has the right to hold and express personal opinions, BU does not condone racism or bigotry in any form, and we are offended by such statements." The university has not said whether Grundy faces any disciplinary action. And she has also found plenty of supporters, like student Noor Toraif, who told the Boston Herald, "You need to have institutional and systemic power in order to be racist. People of color like Professor Grundy don’t have that. ... I'm 100 percent supportive of her and excited for her to come to campus." That idea — that you can't be racist if you're a certain race — was echoed at Goldsmiths University this week when diversity officer Bahar Mustafa hosted "a BME Woman and non-binary event only" and then responded to criticism of the limited guest list by explaining, "I, an ethnic minority woman, cannot be racist or sexist towards white men, because racism and sexism describe structures of privilege based on race and gender. Therefore, women of color and minority genders cannot be racist or sexist, since we do not stand to benefit from such a system." Wow, really? They can't? Ever? How conveniently self-exonerating!

You want to acknowledge that the way you look at the dynamics of race or religion or gender or orientation are profoundly influenced by whether or not you are a member of the group that traditionally wields the most power? I am entirely with you. You want to create safe spaces for typically marginalized groups? Got my support. You want to say that we live in a culture that overwhelmingly favors white people, males and heterosexuals? No argument there. But you want to say they're the only groups that can be biased? Uh, no. You don't have to go all hand-wringing about "reverse racism" or the supposed plague of misandry to still be really concerned about a university educator going on record as expressing serious and sweeping hostility toward any population, and passing off personal judgments as facts. And call me a crazy dreamer, but I believe there's opportunity in this world for ANYBODY to be prejudiced. Anybody can be close-minded. Anybody can be wrong.