GOP's endless crazy train: Are you ready for Herman Cain 2016? 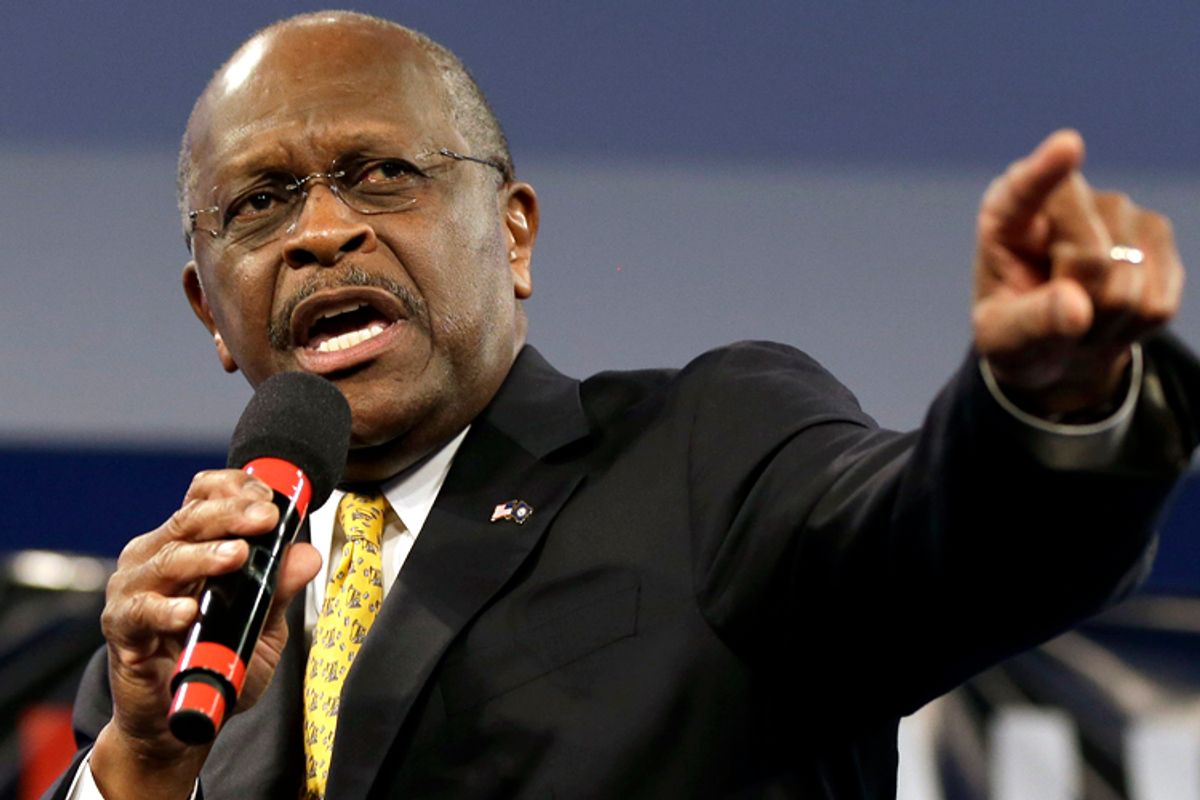 The Republican Party has a bit of mess on its hands heading into the 2016 election season. Simply put, too many Republicans want to be president. The field of declared and potential candidates is large and in flux, and this will leave the Republican National Committee with some tough choices to make when debate season starts up. How do they decide who makes the cut for debate invitations? Do they go by polling numbers and risk letting a clown like Donald Trump through while excluding an unpopular sitting governor like Bobby Jindal? And what about Carly Fiorina? She’s currently polling at about one percent, but do they want to run the risk of the horrible PR that would come with excluding the only woman in the GOP field?

It’s a tough issue to resolve. But while the Republican National Committee is trying to restrict who it considers a candidate when it comes to the debates, it’s going in the opposite direction for fundraising purposes. This week the RNC blasted out a “straw poll” that lets the GOP faithful choose from thirty-six potential “nominees” for 2016. And the committee’s method for choosing who it considers a candidate is… unique.

Let’s break down the RNC’s potential presidents into various categories to get a sense of what the hell is going on here.

People Who Are Definitely or Probably Running for President

You all know these names by now. The declared candidates are on there: Marco Rubio, Rand Paul, Ted Cruz, Ben Carson, Mike Huckabee, Carly Fiorina. As are the people who are definitely running but aren’t officially “running” yet: Jeb Bush, Rick Santorum, Chris Christie, Scott Walker, Rick Perry, etc. These are the staid choices for people who don’t realize that straw polls are silly time-wasters that let you fake-vote for your favorite freaky niche candidate.

People Who Definitely Are Not Running for President

The RNC also decided to include in its 2016 presidential straw poll several people who have already firmly declared that they are not running for president in 2016. The most notable among them is Mitt Romney, who trolled us all earlier this year about his intentions and fooled Mark Halperin before announcing that he was out of the running. Also included is Ron Paul, who announced almost two years ago that he would not be making another run for the presidency and is unlikely to change his mind, given that one of his spawn is already in the race. Newt Gingrich got the nod despite having taken himself out of the running earlier this year so he could focus on his tech blogging and figuring out what a smartphone is.

And then there’s Condoleezza Rice, who ruled out a 2016 bid last autumn and seemed to close the door on ever entertaining a run for the presidency. After Jeb Bush’s news from yesterday, she stands out as the choice for people who still think the Iraq war was totally worth it.

Sarah Palin, Donald Trump, Herman Cain, Allen West – each one of them is forever at a low-level state of “running for president” because that gives cable news bookers the excuse they need to put these ninnies on the air. They are all ideal straw poll candidates since they are self-evidently clownish, beloved by narrow and misinformed slices of the conservative movement, and they will never, ever be president.

Whoever made this straw poll got through all the above categories and found that it was still, somehow, lacking for options. So that person apparently just began picking Republican officials at random to throw in there. New Hampshire Sen. Kelly Ayotte, who will be focused on a very tough reelection bid this cycle, made the cut for whatever reason. South Carolina Sen. Tim Scott is on there too after having populated a few “These People Could Run In 2016 If The World Was, Like, Totally Crazy” filler pieces. John Thune? Sure, why not. Whatever. This doesn’t matter. Nothing matters.

He’s on there. And he’s probably thrilled about it. As thrilled as Tim Pawlenty gets, anyway.

The Next and Greatest President of These United States

Of the names on the straw poll, 35 out of 36 are immediately recognizable to people who closely follow politics. But there’s one name on there that stands out from the crowd of familiars: Mark Everson.

Who the hell is Mark Everson?

Mark Everson happens to be an official candidate for the presidency. He was George W. Bush’s IRS commissioner for a few years and was the CEO of the Red Cross – a job he was forced out of after having an “inappropriate relationship with a female subordinate.”

His platform is… slightly outside the mainstream of Republican policy. “I support an amnesty (to call it anything else is disingenuous) and path to citizenship,” he writes on his website. On the national security front, he calls for reinstating the draft as a means of bridging class divides. He wants to means-test Social Security and is against using dynamic scoring to magically balance budgets. Perhaps most ambitiously, Everson promises that if elected he’ll serve just one term and, in that time, amend the Constitution so that his successors can serve just one five- or six-year term.